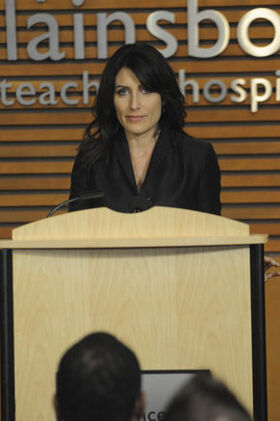 5 to 9 is a the sixth season episode of House which first aired on February 8, 2010. During a day in the life of Princeton Plainsboro's Dean of Medicine, Dr. Lisa Cuddy, the inner workings of the hospital are seen through her eyes. This day proves to be especially trying as Cuddy wrestles with myriad hospital issues and staff disputes that test her perseverance and skills as an administrator, all while juggling issues in her personal life.

Lisa Cuddy's alarm goes off at 5:00 a.m. She does a bit of yoga, then hears Rachel crying. She goes to comfort her before having a shower. She gets ready for work as the nanny arrives. Just as she's about to leave, Lucas drops by and talks her into a quickie. House sends her an emergency page, but she tells Lucas to ignore it. Lucas lasts all of two minutes and Cuddy goes to leave at 7:46.

Cuddy arrives at the lobby at about 8:10 a.m., only to have a nurse tell her there's a problem at the pharmacy. House catches up to her too, but she blows him off. House follows her to her office where he tells her that he accompanied Lucas on stakeout to determine if the subject had a soft-tissue injury. The nurse comes in with more emergencies, but Cuddy just asks her to proofread her proposal because her assistant isn't available.

Cuddy goes to the pharmacy and Oscar tells her their supplier has sent them a double order. She tells the pharmacist to fax them the purchase order, but he hasn't been able to find it. She tells him to let Gail deal with the mistake when she gets back. She then asks if it was just one order and if it was Vicodin. Oscar confirms it was just one drug - ephedrine. Cuddy tells him to have Gail see her as soon as possible. The nurse comes in to tell Cuddy her 8:30 appointment is there, but Cuddy is distracted and tells the nurse to get the visitor coffee.

Cuddy goes to deal with the emergency page and finds a surgeon in the operating room complaining it's too cold. She asks why he doesn't just hurry and he tells her House bribed the physical plant superintendent to turn on the air conditioning to make him hurry up. Meanwhile the patient's body temperature is dropping. Cuddy promises to take care of it and calls the superintendent. She runs into House who tells her the patient the mystery infection is covered in boils and has a large abscess. She promises him the operating room will be available soon.

Cuddy gets a call from the nanny - Rachel is vomitting and has a fever. She finally arrives for her meeting with Eli, an insurance company representative. She tells him that if they don't sign a new contract on her terms by 3 p.m., she's ending their contract. He thinks she's bluffing and leaves.

House intercepts Cuddy leaving her office and tells her that she should have worn a sexier bra to close the deal. He realizes Cuddy made an unreasonable ultimatum, and she confirms she isn't bluffing. House's patient has congestive heart failure, but Cuddy still refuses to go with his treatment plan - deliberately infecting him with malaria.

Dave Thomas, the chief of surgery, intercepts Cuddy on the way to her meeting and complains that she still hasn't hired him a replacement for Chase. He accuses her of spending too much time dealing with House and says he only took Chase on as a favor to her. She asks why, if he didn't want Chase in the first place, why he's worried about losing him.

Cuddy goes to a meeting with the board of directors. She tells them she made a final offer to the insurers. Dr. Simpson thinks she's crazy - that insurance company covers 80% of their patients. However, she convinces most of the board that the insurance company can't afford to cut them off without alienating their customer base. However, they tell her that if she can't get the contract, her contract will come to an end.

House hasn't shown up for clinic duty, so Cuddy fills in. She deals with a patient who wants a prescription for breast milk to treat his colon cancer. He thinks the insurance company will have to pay for it if he has a prescription, but Cuddy tells him that it isn't the case. She tells him she can't help him.

Cuddy finds out that one of the doctors on the emergency room on-calls list doesn't have hospital privileges. He's supposed to be a replacement for the regular on-call doctor. Cuddy tells the nurse to call a friend of hers to fill in.

Cuddy finds a lawyer in her office representing a patient suing for malpractice. She goes to speak to Chase who sewed the patient's thumb back on rather than just covering up the exposed bone. The patient is suing to avoid paying the full bill.

Gail has arrived and it's obvious to Cuddy that she double ordered the ephedrine as a diet pill. She tells him that although she won't report her to the DEA, she has to fire her for stealing drugs.

Cuddy takes time for lunch in the cafeteria and runs into Wilson. She can't reach her nanny. She asks Wilson's advice on what to do with the insurance company, but he has no answers. He suggests she ask House.

House is waiting in her office. His patient has renal cell carcinoma and he still want's permission to infect him with malaria. Cuddy realizes House has a bet going on whether he can use malaria to diagnose the patient. House tells her she's making a bigger bet with the insurance company.

Cuddy runs into Stan and tells him to complete an audit on the ephedrine orders even though Gail has confessed. Lucas drops by with food, but Cuddy is mad at him for discussing their sex life with House. She asks why the nanny isn't calling her back, and Lucas tells her that he told her not to bother and that he would report Rachel no longer has a fever, although she has a small rash. Cuddy immediately calls the nanny, but the phone rings in Lucas's pocket because he grabbed it by mistake. He's also turned off the ringer at home because he was sleeping. He suggests they deal with the insurance company by having him investigate them. Cuddy thinks there is no time, but is intrigued as to how Lucas works.

Lucas tells Cuddy where the insurance company CEO is having lunch. She tells him how little her plan will cost, but he's unmoved.

Cuddy arrives back and finds Stan looking for her. He's found that Gail has ordered an extra ten boxes of ephedrine by altering the paperwork after he signed it. She got away with it because she also had responsibility for double checking the invoices. She figures Gail was supplying a methamphetamine lab and tells Stan to call the DEA and get Gail back in to the hospital.

Eli is waiting in Cuddy's office with a new proposal. However, he's only offering two-thirds of what Cuddy wanted and she turns him down. He says she either has to take it or leave it because she won't get what she wants. Cuddy goes to the stairwell to think, only to find House waiting for her by the door when she leaves. Now his patient has liver failure, but he swears he didn't infect him with malaria. She asks him what he would do about the insurance company. He tells her to focus on the numbers rather than trying to make a point that might cost her her job. She says he risks his job all the time, and he asks if she really wants to be the type who tries to infect a patient to win a $50 bet.

3:00 rolls around and Cuddy calls a conference for staff to announce that they are cutting off the insurance company contract at 5:00 p.m. that day. She's doubled the staff in the call center and plans on announcing that existing patients will be allowed to stay for 30 days.

Eric Foreman comes in to see Cuddy, who is still trying to reach the nanny. Foreman announces that House wants Chase to do the patient's liver transplant instead of Dr. Harani just to show Dr. Thomas that Chase was his best surgeon. However, in order to allow this, they need Cuddy to schedule the operating room. Cuddy goes to see House, who is with a masseuse. She tells him to get his department under control. He tells her that the insurance company isn't just going to give in to her public relations campaign.

Cuddy calls in the thumb patient and his lawyer. She tells them the hospital hasn't been paid because of the suit. They want $50,000 for pain and suffering, but she offers to settle if they pay half the deductible for the surgery - $16,000. The patient tells her that if they hadn't reattached his thumb, he would actually be in better shape financially because he hasn't been able to work because of the recession anyway. All of a sudden Dr. Cuddy gets a page. The lawyer says he will see them in court, but Cuddy says that they intend to get paid and if they have to take his house to do it, they will.

Cuddy finds Dr. Thomas and Dr. Chase having a fight. She breaks it up and goes to see Gail in her office. Gail admits to the deception, but threatens to say that House convinced her to be the ephedrine supplier and that Cuddy overlooked it because she and House were having an affair.

The nurse tells Cuddy that the chairman of the board wants to speak to her. She tells the nurse to tell him she has quit. Cuddy goes to sit in her car, but House finds her there. She tells him to pay Lucas the bet he made - they were having sex when he sent the emergency page. House tells her the breast milk guy found a doctor to give him a prescription. Cuddy admits that she thought the insurance company would back down. House tells her the board won't fire her because the hospital needs her. He also tells Cuddy he knew Gail was a sociopath by watching her open mail. He didn't tell Cuddy because he didn't know about the pharmacy theft and thought it could be leveraged at a later date.

Using the knowledge House gave her Cuddy goes back to speak to Gail. She tells him if she tells the truth, she can help her. Gail tells her she's an idiot and that she started stealing six months after she was hired, that Cuddy hasn't found the full extent of the theft, and that if she goes down, they go down together. However, Cuddy has surreptitiously recorded the conversation on a flower that Lucas gave her and plans to give it to the DEA. Cuddy then heads off to the board to resign.

Cuddy finally get in touch with the nanny, and Rachel is fine. She misses an elevator and finds Eli coming to see her. The insurance company has caved in and agreed to her terms. Cuddy calls out in triumph. She goes to the board in triumph. She's applauded by the staff. She goes to her office to find an installment check from the thumb patient, but tears it up.