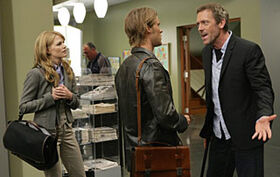 97 Seconds is a fourth season episode of House which first aired on October 9, 2007.

See The Applicants for more information about the cast of this episode.

A wheelchair-bound man is out with his companion dog when he suddenly lapses into unconsciousness in the middle of the street.

Meanwhile, the remaining applicants are just hanging out in the lecture hall waiting for House. As the manipulative applicant, Amber, starts to leave, House shows up. He wants to split them into teams, and finally decides to go by sex. However, Amber wants to join the men, but House hesitates to allow this and finally decides to leave it up to the men. The men refuse to let her join. The teams split up. They discuss strategies.

Meanwhile, Cameron is busy in the emergency room. Amber comes to her and tells her House has turned patient care into a game.

One applicant thinks the patient has encountered a parasite - strongyloides during his trip to Thailand and gives the patient treatment - two tablets of ivermectin. The South Asian applicant comes in to do tests and has another of the applicants carry the patient to the bathroom to take a stool sample.

House goes to see Cuddy. She tells him he can't make a competition out of patient care. Cuddy thinks House already knows what is wrong. He wants to talk about the clinic patient. House threatens to fire all the applicants if Cuddy stops him.

Meanwhile, Foreman is leading his own team at New York Mercy, doing a differential in a manner very similar to House. After realizing their patient might be having vison problems due to the fact she's given up crossword puzzles, he thinks it is aspergillis and orders treatment.

Amber comes to the men saying she wants to sabotage the other women so House will have to pick her. She says she has a diagnostic strategy directly from one of House's former fellows. The plan is to have bugs bite the patient and then test the bugs' excrement for parasites. However, the patient goes into respiratory distress.

The patient improves when he goes on oxygen. His problem is that the air is going into his stomach instead of his lungs. However, one of the applicants thinks it's related to the condition that makes him wheelchair-bound. One female applicant suggests putting him on a tilt table. House punishes the male team for doing too many tests by making them sit out, and tells them one of them isn't a doctor.

Meanwhile, Foreman is having problems diagnosing his patient when the first diagnosis turns out to be wrong.

The male team is wondering who isn't a doctor. They start discussing the case instead. They think it might be a tumor, and wonder how to get away to test the patient. Amber sneaks out of the room when they realize they are being monitored from House's computer.

The other team is testing the patient on a tilt table, but the patient enjoys it and shows no ill effects.

House holds a "tribal council" in the lecture hall. He fires the men, but Amber comes in with a problem but House tells her she has the wrong diagnosis. House tells the female applicants to put the patient on a feeding tube.

Amber goes to Chase to get him to do the test she can't do to prove she was right. He knows he's being manipulated and thinks she's wrong, but agrees anyway. She goes to test the patient, and finds his blood is green.

House confronts Chase about helping Amber, who was officially fired. However, Chase stands up to him. Cameron tells House how much she likes Chase like this.

Foreman finally determines the correct diagnosis - a fast acting form of cancer. He goes to his superior, who notes he hasn't ruled out infection and if he treats for cancer, the patient will die from the infection. She thinks he is still worried about the patient he lost with a wrong diagnosis and tells him not to make the same mistake twice. She tells him to confirm the cancer but he points out that if it is cancer, it will be too late to treat her once it's confirmed.

Meanwhile, House is planning on removing the patient's eye to see what's wrong. Cuddy wants him to do a biopsy, but the patient will be dead before they can get the results. They suspect the patient has cancer and even if they are successful, he may only have months to live. The patient is resigned to dying rather than spend his life in a bed. When House tells him the afterlife is bogus, Wilson throws him out of the room. Wilson then confronts him about not letting the patient have a little comfort in his beliefs.

The team start palliative care on the patient. However, they discover that the patient isn't bleeding internally, which he should be doing if he has cancer. Amber gets a page from House, and as she approaches his office, finds he has electrocuted himself.

The team discuss what happened to House. Wilson comes in to speak to them and tells them he is alive but unconscious. They start talking about the case again and one of the applicants suggests pneumonia. House wakes up to find Wilson calling him an idiot. Wilson fills him in on the patient and tells him the clinic patient is dead. House said he did it because Wilson challenged him to see for himself. However, Wilson reminds him that he has already had two other near-death experiences. House wants to talk about the case, but Wilson just gives him more pain medicine.

The applicants give the patient steroids for pneumonia, but he doesn't get better. He asks for his companion dog to be placed on the bed with him. He finally goes into cardiac arrest and dies.

House is discussing the patient with the applicants when they realize the dog is dead too. One of the applicants mentions that, often, companion animals will live beyond their normal lifespans to stay with their masters, dying soon after the human has passed. House asks Thirteen if she made sure the patient took his ivermectin, but she's not sure. It appears the dog swallowed them and died because of an adverse reaction to the medicine. House tells Thirteen that the answer to the question was "no I didn't see him take the pills".

Cuddy tells House he screwed up. He is responsible for the mistake of his applicant.

Meanwhile, Foreman comes back to the hosital late at night to take the patient for radiaton therapy. The patient quickly improves, confirming his diagnosis, but his superior fires him for going on a hunch and disobeying her orders instead of following protocol.

They find the patient died of the strongyloides because he didn't take the pills and, because House suspected it was strongyloides and he didn't get better on the ivermectin, he ruled it out. House doesn't fire Thirteen, but does give her a lecture, reminding her that because she did screw up this time, she would never make the same mistake again.

House greets a patient, who immediately tries to electrocute himself. House calls in a crash cart, but wonders why the patient would do this. He can't get Cuddy or Wilson interested in the problem.

House goes to see the patient in intensive care. He tells House that he was in a head-on collision and was dead for 97 seconds. However, he describes the experience as the best of his life. House tries to give him a medical explanation, but the patient rejects it, believing there is something after death.

As his other patient has the same belief in the afterlife, House goes back to see the clinic patient.