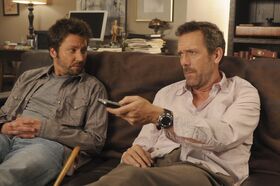 Adverse Events is a fifth season episode of House which is first scheduled to air on September 30, 2008. House and his team treat an artist: is a clue to his conditions to be found in his paintings?

An artist finishes a portrait, but the man who commissioned it gets angry that his wife hasn't been portrayed properly. The artist is confused, but the artist's girlfriend sees the portrait and realizes that all the features are distorted.

House is meeting with his private eye, Lucas Douglas. Cuddy walks in and tells House that he's realized that House is trying to pass off his private eye accounts as hospital expenses. However, she actually rejected one real expense.

The team is staring at the artist's paintings. Only the most recent has a distorted perspective. A stroke or brain tumor have been ruled out. Thirteen thinks it might be drugs, but House knows that the ER would have tested for that. House tells the team that his private eye has been investigating them. However, the private eye couldn't dig up dirt on Taub, only on Taub's wife, but he won't tell Taub what it is.

They decide to perform a contrast MRI on the patient. He is drawing normally again. His girlfriend convinces him to take the test anyway. Taub and Kutner go to do an environmental scan of the studio. They discuss whether Taub should be interested in what House has on his wife. They report back to House that they couldn't find anything, but the MRI is clean too. They discuss a brain biopsy, but Thirteen doesn't think that he will consent to it. House thinks it is drugs, but tells the patient that he might have a brain tumor. The patient refuses surgery, but appears not to be scared. House thinks that the patient is hiding something - he's a test subject for a pharmaceutical company. The patient admits he's taking three different experimental drugs. House thinks he will be fine, but keeps him overnight. He agrees not to tell the artist's girlfriend about it.

Taub comes to see House about what he found out. House tells him that his wife has a separate bank account. She's making deposits but not withdrawals. However, Taub already knew about it.

All of a sudden, the patient has a seizure. House still thinks the experimental drugs are to blame. They start to discuss the drugs, which House decides to give them cute names like "Bisexidrene" (referring to Thirteen's sexuality), "Cuckoldisol" (to add to his theory that Taub's wife is cheating on him) and "Worldsorestkneesasil" (referring to Kutner's Guiness Book Record attempt). Foreman thinks it might be a drug interaction. House orders dialysis for a rapid detox.

Thirteen realizes that Taub didn't know about the account. However, Taub still isn't worried. He realizes his wife isn't perfect and she makes him happy.

The dialysis seems to be working. Taub confronts House about screwing with his relationships. House tells him he's going to wind up apologizing for finding out and forgiving his wife.

The private eye and House are arguing over the radio about House's obsession with his team's lives. The private eye points out that if House screws up Taub's relationships, Taub will probably quit.

The patient takes a turn for the worse when his throat starts swelling. They have to do a tracheotomy to restore his breathing.

The patient's face is swelling, but steroids aren't working. The team wants to do a differential, but House wants to talk about what his private eye found out. He still thinks it is the experimental drugs. He thinks it might be drug withdrawal. He wants to put the patient back on the drugs, then wean him off slowly.

Cuddy is looking for the private eye. She finds him in her office. He admits it wasn't House's idea - he wants to ask her out, but she tells him it's creepy. He reels off some of the things that he found out - all of them trivial. He leaves anyway, after giving her flowers. On the way out, he offers to spy on House, for a fee. When he agrees to do it for whatever Cuddy can afford, she agrees.

Taub is having dinner with his wife. He admits he found out about the secret account, but lies that he found out himself. She was saving the money and bought him a car, which will be delivered in a few days.

The patient starts to improve, but all of a sudden grabs Thirteen. Thirteen fights him off - he was trying to get sexual with her.

The experimental drugs don't appear to be the cause of the patient's problem, but they may have set off an underlying illness. Taub is demanding an apology from House. House admits he was wrong to bring it up, but he notes that Taub thinks he doesn't deserve the gift.

The patient has narrow blood vessels, but if it were congenital, he would have had symptoms for years. Taub thinks it might be an arrhythmia. Taub goes to do the test. The patient is apologetic about Thirteen, but Taub tells him not to tell his girlfriend about it. Taub confronts House about not letting him go home to see his wife. They find an arrhythmia, but the patient is still conscious. They go to defibrillate and stabilize his heart. However, House notices the patient has both grey and red hair in addition to his normal black. The patient denies that he dyes his hair.

House realizes that the disease is affecting his melanin. The patient needs an operation to separate his heart from his brain, but may not survive it.

Thirteen and Taub go to tell the patient about the procedure, but he doesn't recognize them. The visual agnasia is intermittent. Taub thinks they missed a toxin. Taub thinks it may have been stored in his fat and it's being released as he loses weight. House gives him an hour to prove he's right. Taub goes to the patient, but his girlfriend won't leave. The patient admits he's only sold two paintings since he met her and has been living off drug trial money. The girlfriend is upset he didn't tell her, but forgives him. Taub still wants to see the paintings that he didn't sell.

They prepare the patient for surgery. Taub goes to the artist's warehouse to look through the paintings. He finds others that show visual agnasia. He makes a note of the dates. He calls House to tell him the symptoms happen every other month. It has to be the experimental drugs. House changes the surgery - the patient has a bezoar - a ball of undigested food in his stomach that has been storing the drugs and releasing them all at once.

Taub's wife shows him the new car. He seems disappointed, but he instead tells her that they need to talk.

House comes home to the private eye. He tells House Cuddy didn't fall for it. The private eye has found out that the photo was real.

When Taub is having dinner with his wife, the brand of beer they're drinking appears to be 'Beer' brand beer, possibly a reference to House's hallucination in House's Head

"It's like the Mod Squad, no one can stop them." House, about experimental drugs.

The Mod Squad is a tv series from the late 60's. Omar Epps himself starred in the 1999 film of the same name, as Lincoln.