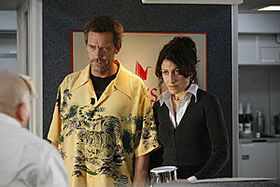 "Airborne" is a third-season House episode first aired in the United States on April 10, 2007.

An elderly woman welcomes a young Latino woman who offers to perform sexual favors for a fee. The elderly woman grabs a packet of several $100 bills and looks upon the now scantily-clad young woman before suddenly passing out on the floor. The young woman calls 911 and the elderly woman is transported to Princeton-Plainsboro Teaching Hospital, where she is admitted by Dr. Wilson. He is quick to note the motion sickness patch that she left attached - it could have caused her collapse. The young woman wishes to leave to see another client, but Wilson urges her to stay with the elderly woman just in case she suffers a relapse. The patient wants to let the woman go, but then falls to the floor in the same fashion as before. Wilson wonders where House is.

Meanwhile, Dr. House and Dr. Cuddy are in an airport gate in Singapore, boarding the plane for a flight back to New York. Cuddy notes how House has racked up over $500 in room service expenses moments before he is escorted to a seat in first class. Cuddy is shown to coach as House notes how the expense problem has been solved.

Back at the hospital, Wilson sits with the elderly woman as he questions her about recent activity that might have induced her blackouts. The woman regretfully tells Wilson that she went to a tropical island where she had probably consumed unsanitary water and food, drank dangerous alcohol mixtures, engaged in sex, and inhaled cocaine.

House is given a steak dinner as he notes a Korean man moaning a few seats down. When he regurgitates a pink liquid, House tells the flight attendant that he's drunk. When the attendant asks if there's a doctor on the plane, House offers to "go get her" and "kindly" relieves Cuddy of an uncomfortable seat in coach.

Wilson start discussing the case with House's team. He politely orders several tests done to determine the disease while Dr. Foreman notes that Dr. Chase's suggestions are most likely based solely on the fact that Dr. Cameron suggested them. On the flight, an angry Cuddy returns to House noting that the vomiting and moaning man may likely have meningococcus, a highly contagious form of bacterial meningitis. Cuddy is concerned that if this is the case and they do not order the plane turned-around, their route over the North Pole will leave them with no opportunity to land the plane for hours and not only the sick man, but anyone who had been infected by him, would be dead before they land. House, however, is convinced that it is not meningococcus and that she shouldn't induce hysteria.

Chase and Cameron are sent to scan the old woman's house for toxins. Cameron thinks Chase is agreeing with her because they're having sex. Cameron coaxes Chase into having sex on the patient's bed.

A girl in the seat in front of House has overheard their conversation and soon proceeds to vomit. Cuddy still believes that it's meningococcus and that immediate action needs to be taken. House is dismissive until he sees a rash on the woman's back - the same symptom the Korean man had.

House instructs a young boy to agree with everything he says (imitating Dr. Chase), a foreign man to disagree with everything he says (imitating Dr. Foreman), and an annoyed middle-aged woman to get mad at him for everything he says (imitating Dr. Cameron), as if to reenact his usual diagnosis environment. On the plane, with the number of sick passengers increasing, House begins to scribble on the projector screen in coach as through it were the whiteboard in his office that he typically writes symptoms on. He comes to the conclusion that the fish contained a poison. House makes an announcement on the loudspeaker that a man had food poisoning and that anyone who had a seafood dish should proceed to the restrooms and vomit as soon as possible. However, he agrees with Cuddy that meningococcus would also explain the symptoms.

After the fellows meet back up with Wilson at the hospital, Chase notes the tox screen was a waste of time, as was Foreman's brain scan. It is at this point that Wilson concludes that the woman has breast cancer and prepares for a mammogram immediately.

More passengers start feeling sick and Cuddy is still sure it is meningococcus. The Korean man is feeling worse. He gets the patient to stand up, but he collapses.

Wilson approaches the young woman, who is leaving, and asks her to stay with the elderly woman, for moral support as she has no other friends or family. The mammogram is completed without event, but as Cameron helps the woman away from the machine, she begins to complain of eye pain. This, as well as a spotless mammogram, debunks the cancer diagnosis.

House is still trying to determine what is wrong with the Korean man. He guesses radiation sickness. He thinks the woman with the rash is pregnant. Cuddy dismisses House for coming up with two different diagnoses. Right then, Cuddy starts having the same symptoms. Cuddy is telling House "I told you so" while he examines her. House tells the attendant there is something to worry about, but to tell the passengers otherwise. More passengers get sick.

Wilson talks to the Latino woman, who admits she just met the patient. Wilson says she can go, but she doesn't want to. She leaves anyway, but leaves her card so that Wilson can tell her what happens to the patient.

The elderly woman is transferred to a room, told to cover her eye, and made to stare at a spiraling screen to help induce seizure. This tactic also fails when the woman's brain activity plummets as she goes comatose.

House parades up and down the isles, collecting medication from all the passengers. He diagnoses a woman with herpes, and finds her husband with the pills to treat it.

Back at Princeton, the team is arguing whether or not to drill into her skull. Wilson orders a lumbar puncture.

Cuddy tells House to do a lumbar puncture on the Korean, but House thinks its foolhardy due to the lack of equipment and turbulence.

At the same time, in the hospital, the elderly woman is prepared for a lumbar puncture.

Meanwhile, House is jerry-rigging the procedure and is able to see that the liquid was clear. At this point he makes another call on the loudspeaker, informing all passengers that they will need to be isolated when they start exhibiting symptoms such tremors in the left hand. When several female passengers' hands begin to shake uncontrollably, House notes that none of the company has bacterial meningitis, but rather mass hysteria, and that if they all relaxed, their symptoms would naturally go away. To prove his point, he reminds Cuddy left-hand tremors are not a symptom of meningitis, or anything else for that matter. The fluid from the lumbar puncture is also clear showing no infection. Even the rashes are psychosomatic. He suggests "drinks all around" at the expense of the airline as the perfect solution. Cuddy starts feeling better almost immediately. However, the Korean man is still sick.

House goes back to his "whiteboard" and his "team". When Cuddy mentions condoms, House concludes that the Korean man may be acting as a drug mule, and the drugs in condoms he swallowed may have burst, setting up the conditions for an overdose. They will have to operate. "New Chase" thinks it's a cool idea.

With the elderly woman's lumbar puncture results unhelpful, Foreman concludes the only logical step at this point is to drill into the old woman's brain. Chase is wondering if his sexual relationship with Cameron is affecting his work. As they prep for surgery, Chase wonders why the woman's cat wasn't eating any of its food.

House preps the Korean man for emergency surgery by having him consume alcohol and having his "team" hold him to a table.

Chase rushes to the old woman's house wearing a gas mask to scan for toxins a second time. He quickly notices that the woman's cat has died (it had earlier been sitting on the top of a chest of drawers, the highest point in the room it could reach) and that its food remains untouched. He follows a pipeline outside, eventually leading to a house that was being flushed with methyl bromide a powerful insecticide that is poisonous to everything. He quickly calls Cameron, who alerts the surgeons just moments before the drilling has commenced.

House is just about to make the abdominal incision when the young boy accidentally lets go of the Korean man's shoulder, then quickly holds it back down again, causing the man to moan in pain then fall silent. House deduces that pressure on his joints relieve his pain. Checking the man's wallet, he notes a receipt for a scuba-diving lesson the previous day. Cuddy orders the flight attendant to drop from 38,000 feet to 5,000 feet; the man has the bends from surfacing too quickly from a deep dive the previous day and then moving to a depressurized environment on the plane. She also orders pure oxygen to flush the nitrogen out of his system.

Wilson and Chase tell the patient what happened. She feels better knowing it wasn't her trip that nearly killed her, it was coming home.

Wilson calls the young woman's phone, alerting her that the elderly woman would be okay, and thanking her for standing by her side. Wilson asks the young woman if he can see her, while the flight attendant also lets House know she frequently visits New York.

Chase tells Cameron that he wants more than just a "Friends with Benefits" relationship, but she tells Chase she's not going to have sex with him any more.

Two different ones for this episode. Methyl bromide poisoning scores a 10/10 as it is very rare because of the precautions taken with the substance to prevent accidental poisoning.

The decompression sickness scores a 1/10 in this case, at least after the receipt was found, as it is very common among scuba divers and those who work in compressed air environments, such as tunnel diggers.