Sửa đổi
All In 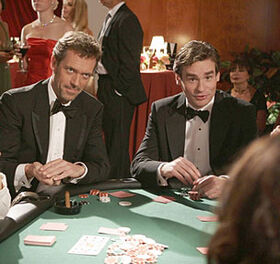 All In is a season 2 episode of House which first aired on April 11, 2006. a young boy has the same symptoms as one of House's old patients who ended up dying, will they be able to find out what killed her in time to save him. Meanwhile, House tries to keep Cuddy away from him by helping Wilson during poker night.

In a field trip, a young boy named Ian has to pee and asks his teacher where the bathroom is. She sends Miachel to go with him and suddenly collapses. Ian asks if the baby is coming, when the teacher sees blood on Ian's pants.

Meanwhile, at charity Casino Night at Princeton-Plainsboro, House, Wilson, and Cuddy are engaged in a game of poker when Cuddy receives the news about her new patient. She dismisses it as dehydration and gastroenteritis, but House, recognizing the symptoms, decides to drop out of the game and take the case behind her back.

After testing Ian's coordination and brain function, House discovers Ian has Ataxia and realizes Ian has the same disease as a former patient from 12 years ago, 73-year old Esther Doyle, who died under House's care and was never correctly diagnosed. House then drags Cameron, Foreman, and Chase out of the party to perform a differential diagnosis. Drawing up a list of all of Esther's symptoms, House is able to predict what will happen to Ian next, as well as how long it will take him to get there.

House first suspects it is Erdheim-Chester disease and orders a colonoscopy, but tests are negative. House, knowing the next symptom that will develop is kidney damage, orders a kidney biopsy. However, they are too late: bloody urine proves kidneys are already far too damaged to be saved. The team is forced to do another differential diagnosis. However many of the diseases proposed, House already tested for 12 years ago.

Next the team postulates it is lymphoma and tries more tests. To keep Cuddy busy and off the case, House calls Wilson and has him stall her in the poker game. However, tests are negative for lymphoma. Unable to think up what disease afflicts the two people, House orders immediate treatment to protect Ian's liver, which was the next symptom Esther developed. His plan succeeds and Ian does not develop liver damage, but instead skips the next two symptoms and develops respiratory failure.

Thinking it could be cancer, House includes Wilson in the differential. Wilson suggests Kawasaki's disease, but before the team begins tests, they discover a mass in his heart. Postulating that Ian, being younger than Esther, has a stronger immune system and can last longer while under assault from this unknown disease, House performs a heart biopsy on Ian.

The biopsy induces cardiac arrest in Ian, prompting an enraged Cuddy to pull House off the case and ban him and his team from performing any more tests on Ian. However, House refuses to give up, stating that they still have the mass obtained from the biopsy and can perform the tests on that.

The team suggests seven likely diseases, but only has enough tumor mass to perform three tests. First the team tests for Histiocytosis, but it is negative. Next they test for Tuberous sclerosis but that is negative also. Desperate and with only one remaining test, House wanders the hospital trying to think of his next move, when he hears from Wilson that he won the poker tournament. Wilson won only because he had kept his hole cards, two aces, hidden the entire hand, prompting House to guess that the disease also kept itself secret until the end by not reaching the Gastrointestinal tract first.

House then orders his team to perform the final test on the first disease suggested: Erdheim-Chester disease. Ian is saved, House finally discovers what killed Esther, and everyone is happy again. The episode ends with House and Wilson playing poker and joking as they did in the beginning of the episode.

In this episode, when House pulls Est(h)er Doyle's file, it is labeled Ester Doyle. However, when House writes her name on the white board, he includes an "h" making her Esther.

House plays the piano in this episode; "Hymn to Freedom" by Oscar Peterson.

House states that 42 is his lucky number. This refers to "The Answer to the Ultimate Question of Life, the Universe, and Everything" from The Hitchhikers Guide to the Galaxy, by Douglas Adams.

Erdheim-Chester is common disease, but Houses disease appeared only in House episode.