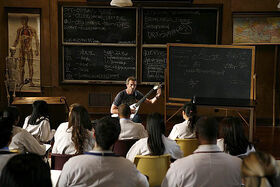 Alone, the premiere episode of House season four aired on September 25, 2007. With House's team all having either resigned or been fired, House tries to convince everyone that he doesn't need a team to do his job.

A woman thinks she is hallucinating because the building she is in seems to be shaking. She complains of dizziness to her boyfriend Ben, and all of a sudden, the building collapses.

Cuddy comes to House with the case. A gas main exploded and the patient was buried under rubble for six hours. However, she's running a high fever. They start arguing about House hiring a new team, but he stands there playing his guitar until Cuddy pulls out the amp. He agrees to take the case if Cuddy agrees to give him a week off if he solves the case within a day. Wilson finds out and tells Cuddy it's a bad idea.

House is writing on his whiteboard and bouncing ideas of the hospital's janitor. The janitor is guessing mechanical problems, which House translates into possible diagnoses and then rejects them. The janitor then guesses lupus. House resigns himself to speaking to the family. The janitor is still there taking notes for House. When the patient's boyfriend expresses worry, the janitor comforts him. When House suggests an environmental scan of the house, the janitor refuses and holds out for $50. House won't fork it over.

House recruits Wilson to break into the patient's home on the pretext he's taking him to lunch. House is clearly in pain trying to search the home, so Wilson helps out. While House is resting on the patient's bed, he finds the patient's diary. It shows her mood has improved. House thinks the patient might be suffering from a mix of antidepressants and demerol.

The boyfriend denies that the patient, Megan, is on anti-depressants while the janitor tries to get them to sign a consent for dialysis. The patient's family finally realizes the "assistant" is a janitor. House is trying to convince the family, particularly the mother who is her proxy. The mother agrees to treatment.

When House returns to his office, he finds a ransom note for his guitar. Wilson calls with a ransom demand, but House barges into his office. Wilson pretends not to know, but his newspaper is the obvious source of the note. Wilson says the ransom is to start interviewing fellows.

The patient's fever goes down and she regains consciousness but can't talk. All of a sudden, her heart starts racing and she goes into cardiac arrest.

The patient is still suffering from a tachycardia. House says he won the bet he had with Cuddy because he explained the fever and was right about the anti-depressants. He starts bouncing ideas off Cuddy. He finally gives up and asks Wilson for the resumes and a guitar. Wilson gives him the resumes and suggests the guitar will be returned after the interviews.

House goes back to working with Cuddy. He thinks the heart problem is the result of the trauma. House explains how it could have happened two days after the collapse. However, House tests the heart and it's fine. Not only that, the fever returns. House thinks it might be the DTs - alcohol withdrawal. The mother and boyfriend can't believe she was a secret drunk. The mother agrees to give her intravenous alcohol.

House starts arranging interviews, but the candidates are not very promising. House pages Wilson in the middle of the night to get him out of his house so he can search it for his guitar. House threatens to erase "El Fuego del Amor" (The fire of love in English), a telenovela that Wilson is recording on his TiVO as he says he is learning Spanish.

The patient's fever drops and her heart starts working again. It appears House was right about being an alcoholic. However, they notice the patients lip's are moving and Cuddy believes she is screaming.

Cuddy tells House the patient now has pancreatitis. House blames it on the alcohol. Cuddy doesn't argue and becomes unresponsive. She says she's not interested in what House has to say and that House needs a team to bounce ideas off of.

House is in his office when Cuddy comes in to seek his help again. Cuddy wonders why the patient is lying and the boyfriend didn't know about the depression or alcoholism.

However, House is distracted. He goes to Wilson's office with pieces of his guitar he found in his office. Wilson threatens further harm.

House performs an MRI on the patient. Wilson comes in and wonders why House doesn't want another team. House wants to focus on his MRI. Wilson tells him to get over the hurt he is feeling from the loss of his team.

Meanwhile, the patient is bleeding internally. They start surgery to stop it. Cuddy tells House the pancreatitis was the result of the internal bleeding, not the alcohol. Cuddy thinks House has been wrong every step of the way even though the treatments have worked. However, House notices that the patient has an enlarged uterus - she's been recently pregnant and has had an abortion. She is bleeding from use of the pill - a blood thinner.

House goes to look for the mother, but the boyfriend confronts him. He doesn't believe House because they've been trying to have kids, but agrees to the treatment.

House goes to see a cancer patient in order to trick Wilson into thinking he is missing by moving him to another room.

However, the treatment with tamoxifin for the thinned blood has an adverse result on the patient. House still refuses to admit he was wrong even though the patient is crashing. Cuddy is wondering how one patient has three different disorders.

House goes to the ER to look for doctors who will help out. A young woman doctor tells him the doctors have been given a memo not to help him. However, she later meets House in the hall to suggest diagnoses. House thinks she is looking for a job. When House asks why both her diagnoses can't be right, she answers because then the patient would have no hope. House tells her to send him her resume and put it on top of the pile "that I'm never gonna look at".

House goes to talk to Ben, who is comforting another man whose girlfriend, also caught in the collapse, has died. He thinks the female doctor was right, but all of a sudden notices a lump on her arm. He orders a biopsy.

House issues his own memo telling everyone to ignore Cuddy's memo. A nurse finds granulomas, indicating an allergic reaction, but the patient isn't allergic to the only thing that she might be allergic to. The mother is furious.

Wilson finds that his patient is missing and realizes House did it. Wilson confronts him. When Wilson says that giving his patient the wrong meds would be a disaster, House gets an idea. House finally realizes they haven't been treating the patient they thought they were treating. It wasn't Megan but one of her friends. The boyfriend claims it's her, but the symptoms fit the other patient's chart - depression, alcoholism, abortion and allergy to the drug they've been giving her. When the patient says her name, Liz (her full name is Liz Masters), and not Megan, the family realizes House is right. The patient is reunited with her boyfriend, who thought she was dead.

House tells Cuddy he did it all by himself. Cuddy tells him that his old team would have solved it earlier - Cameron would never have believed the boyfriend didn't know these things, Foreman would not have thought it was multiple diseases and Chase would have backed him up. She orders him to hire a new team.

House gets his guitar back. He's talking about how smart he is, but how he sometimes needs help. He tells the interviewee that they can look forward to a grueling interview. The camera pulls back to show a room full of almost thirty doctors.

Although the diseases in the episode are rather common, hospital mixups of this nature are rare. There is really only one other case of a misidentified patient after a disaster, and in that case the care was entirely appropriate in any event. More common is patient mix-ups of well identified patients, leading to mistaken surgical procedures. The situation is improving as all members of the surgical team are given authority and responsibility for checking the identity of each patient.