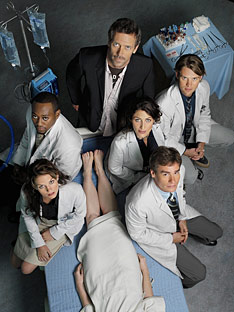 This article is about the episode. For the procedure see Autopsy (procedure)

Autopsy is a second season episode of House which first aired on September 20, 2005. A nine year old with terminal cancer who is hallucinating comes to the hospital. Meanwhile, House has a cold and he test drives a motorcycle.

A 9 year old terminal cancer patient has a seizure and hallucinations while getting ready for the day.

House comes in with a bad cold and is ready to leave, but Wilson intercepts him about the patient. House in intrigued about the hallucinations when there is no cancer in her brain and the cancer is in remission. House agrees to take the case.

The team is reviewing the patient's medical history, which contains a long line of treatment. They can't come up with a reason for the hallucinations. House orders a tox screen and an MRI. He tells Cameron not to get attached to the patient.

Chase takes the patient to the MRI, who is very familiar with all the technology. However, the MRI and tox screen are clear. House excuses himself and orders them to test her blood gases. Chase gets ready to perform an angiogram, when the patient asks him to kiss her because she hasn't been kissed. Chase does so.

House comes in the next morning, not having slept. All the new tests are negative. Foreman suggests it might be syphilis from involuntary sex. Chase tells them that she hasn't even been kissed and that she asked him to kiss her. House thinks that she is being manipulative and that she did get Chase to kiss her. However, the patient denies it and Cameron's examination shows no sign of sex.

House interrupts Wilson to tell him that they have no idea what is wrong. House is still convinced there is something wrong, and he thinks it might be a heart tumor because of the low oxygen saturation. However, that would mean she has two different cancers - a statistical unlikelihood. Wilson is skeptical and won't let House do exploratory surgery.

House meets his team in the locker room so they can listen to the patient's heart to see if there are signs of a tumor. Cameron hears an extra flap in her mitral valve. He orders surgery to look at it.

Wilson and House discuss the patient's bravery. Wilson is impressed, but House isn't.

They find a tumor in her lung and heart, growing along the heart wall. They start to repair it. However, they may have to remove too much of the heart to repair it, and the tumor may have metastasized. During the surgery, the patient's eye starts bleeding.

The heart tumor is benign, and the eye bleeding obviously isn't related to it, and neither are the hallucinations. House thinks it might be a blood clot in her brain, thrown off by the heart tumor. They start looking for it. However, the angiogram is clean - there is a clot but they can't find it. They can't do exploratory surgery on the brain, and they know the clot will cause death at any time.

Wilson goes to tell the patient she will die. Her mother is more upset than she is. House wonders if the patient's bravery shows some form of brain damage which may be affecting her ability to feel fear.

House: Is it legal to perform an autopsy on a living person? Cuddy: Are you high?

House asks Cuddy if he can induce a hypothermic cardiac arrest, drain half the patient's blood and re-insert the blood to look for the clot with a portable MRI. Despite the risks, Cuddy agrees. Wilson goes to get consent from the mother. House learns that Wilson hasn't told the patient the risks, and surmises that perhaps the patient's bravery is from not knowing what is going on. House goes to talk to her about the risks of the procedure and how long she has to live even if they are successful. The patient doesn't want to die despite the fact that the treatment for her cancer will be painful because her mother needs her and she loves her.

A large surgical team tests the procedure on a corpse several times. They need to complete the procedure within one minute to get useful results. They finally find a solution to keep the blood lines from being moved - bolting them to the table. They start the procedure on the patient. They cool her body temperature down to 21C (70F) Towards the end of the sixty seconds, Foreman spots a slowdown in blood flow in the hippocampus. They start warming her up again. They re-start her heart and start surgery. They find the clot where Foreman saw it. The patient recovers, and is still brave. Wilson points out that the bravery obviously wasn't a symptom as the clot wasn't in her amygdyla. House still isn't impressed. Wilson points out that the patient enjoys life more than House does, and could actually outlive him. The patient leaves the hospital after giving House a hug and then invites him for a walk.

The patient shows blood in his groin. He tried to circumcize himself when his girlfriend reacted poorly to his uncircumcised penis. House sends him to a surgeon.