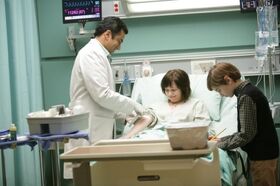 Big Baby is a fifth season episode of House which is scheduled to air on January 26, 2009.

When Cuddy decides to spend more time caring her baby, she hands some of her day-to-day responsibilities to Cameron. One of them is supervising House, whose patient is a very nice special-education teacher who collapsed in class. House doesn't think that her niceness is a good thing. Meanwhile, Foreman must make a critical decision regarding Thirteen's participation in the Huntington's drug trial.

A teacher suddenly starts bleeding from her mouth and collapses on the floor.

Cameron brings the teacher's file to House and simultaneously tells him that she's now Cuddy's deputy when Cuddy is not there.

The patient is a 29 year old special education teacher. Foreman is bemused that Cameron now has authority over House. When Foreman and Thirteen start disagreeing over the diagnosis, he soon guesses that they are having a relationship. They confirm it. House orders a bleeding time test.

Kutner and Thirteen do the test and hear about the patient's work. They tell her to answer House's questions with simple yes or no responses.

Wilson is visiting Cuddy and the baby. Cuddy is worried she's not attaching emotionally to the baby. However, she assures Wilson she is doing everything the baby needs.

The patient's platelets are misshapen, which explains why the blood isn't clotting properly. House wants to do total body irradiation, but Kutner tells him that he's being premature. House goes to Cameron to get permission. Surprisingly, Cameron agrees. House then requests oral sex. He goes back to the team and tells them he's not going to do the irradiation - it was a test of Cameron. However, now if he doesn't do it, he looks manipulative. House orders a double dose of methytrexate and the addition of steroids.

Foreman talks to Chase about Thirteen being on the placebo. He wants to put her on the real drug. Chase tells him he's being an idiot.

Taub and Thirteen do a fake radiological procedure on the patient. However, when the patient gets up for a bathroom break, she collapses and goes into cardiac arrest. They manage to get her heart beating again.

They can't find any problem with her heart. House wants to know why she wanted to get up to urinate during a procedure. They think it might be agglutination from exposure to low temperatures. He orders an ice bath.

Cuddy confronts Cameron about approving the irradiation. Cameron agreed because House was bluffing and it was the only way to keep him under control. House comes in and lets Cuddy know that Wilson told him about her doubts about the baby. House reports to the team that Cameron only approved the cold water bath after they do a blood test to confirm.

Kutner goes to draw blood and finds one of the patient's autistic students and his mother there. Kutner lets them stay if they are discreet.

The blood test is positive and they plan the ice bath.

Foreman goes to see Cameron about Thirteen. The minute he walks in she tells him not to be an idiot.

Cameron tells House to be present during the procedure. The patient is suffering during the bath, but she keeps talking about her job and how she changed her career plans after visiting a special ed class. However, the patient breezes through the ice bath test, but House thinks she has brain damage.

House points to the patient's inability to remember to urinate before a procedure and mixing up numbers is a sign of a specific type of brain damage related to multiple sclerosis. Kutner wants to to an ERCP before trying a brain biopsy. Kutner and House go to Cameron to argue about it. She tells House to do an MRI to confirm before doing a brain biopsy. House is still incensed and tries to force Cameron to make a definitive decision, but she insists on the MRI.

Cuddy goes to Wilson about House saying she should give the baby back. She doesn't really want to go home with the baby.

The MRI is clean. House orders the ERCP to check the patient's pancreas.

The patient's blood oxygen level starts to drop as her lungs deteriorate, showing that House was probably right about multiple sclerosis.

However, House agrees that the lack of indication on the MRI points to something other than multiple sclerosis. He wants to remove the patient's skull. Kutner objects and goes to do an endoscopic ultrasound. House tries to get permission from Cameron, but she wants some indication that he's right.

Foreman and Thirteen do an environmental scan of the classroom. Thirteen says she wants to have children.

Wilson brings a gift to Cuddy - a picture of her baby as she will appear at age 18. He tells her that althought it may seem pointless now, there are lots of other things a parent will do. When Cuddy offers to pay for the picture, Wilson admits it's the one that came with the frame.

House tries to fake a viral infection to get Cameron to approve the procedure, but she sees through it. Kutner couldn't find anything wrong with the pancreas. Cameron finally agrees to let House look inside the patient's brain. Kutner can't believe Cameron said yes, and he still has theories.

They start the procedure with the patient being conscious throughout. Cuddy calls to try to stop the procedure, but Cameron is assisting. Cuddy's baby starts crying and the patient starts getting annoyed. The patient's blood pressure starts to drop. House wants to know why the baby's crying is the only thing that annoys the patient. Cuddy pleads with the baby to stop crying and she quickly does. The patient calms down too.

Kutner wants to remove the patient's spleen, but they can't put her under anesthesia until the previous anesthetic clears. House wonders why she was so annoyed about the crying baby.

Cuddy comes in to tell House she connected with the baby. She hands Rachel over to him to hold and Rachel spits on him. House talks about the evolutionary imperatives for babies and suddenly thinks of something. House goes in to see the patient and tells her she has a patent ductus arteriosus, a congenital heart defect which makes her calmer when her blood pressure rises and upset when her blood pressure drops.

Cameron goes to Cuddy to ask to be relieved of her supervisory duties over House.

The patient's student visits and spills stuff on her, but she doesn't get upset.

Cuddy deals with her life as a busy parent, leaving the baby even when she's crying.