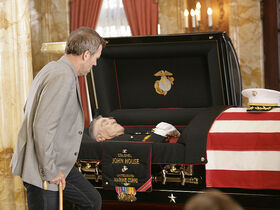 Birthmarks is a fifth season episode of House which first aired on October 14, 2008. House must come to terms with the death of his father, but on the way to the funeral he must also deal with the case of an adopted Chinese woman who collapsed while seeking her birth parents. Wilson drives him to the funeral, but House is soon up to his old behavior. Will it result in Wilson having to face an incident from his past?

A woman visits China to visit her birth parents, but they reject her. As she is making a wish by lifting a Buddha statue, she suddenly collapses with abdominal pain.

House comes into the office and announces that his father has died. He is treating the Chinese woman, and wants to continue the differential. Taub tells him to call his mom, and House realizes that Taub told his wife that he cheated on her. House says he's not upset about his father's death.

House goes to see the patient. Her adoptive parents, who are Caucasian, come in having done an environmental scan. House finds some licorice root in her belongings, used to treat SARS in China. House figures she has it and starts her on interferon.

Cuddy comes in to give House her sympathy about his father and to give him a shot of immunoglobulin to prevent him contracting SARS. She tells him that his father's funeral is the next day and his mother has asked him to deliver a eulogy. Cuddy tells him either to call his mother to say he can't come or start writing the eulogy.

Kutner goes to the patient to get a list of her contacts, who might also be sick.

Suddenly, House collapses in his office.

The patient develops tachycardia and Kutner finds her liver is failing. The SARS diagnosis is obviously wrong.

House wakes up to find himself in a car with Wilson driving. House realizes the immunoglobulin shot was a fake. He smiles when Wilson says he's not doing this because he cares about him. He also realizes that his mother called Wilson and not Cuddy. He also finds his Vicodin is missing.

The team calls House to tell him about the liver. Foreman orders the team to draw blood to test for genetic liver diseases.

Kutner goes to the patient, but she's missing.

House gets a rest stop, but Wilson won't give him his cane so he can slip away. Wilson is insisting that he go to the funeral and be nice. House negotiates for the return of his cane and agrees to go the funeral. He uses his cane to knock the car keys out of Wilson's hand into a sewer.

Kutner finds the patient smoking in the courtyard. He decides to draw her blood there. The patient is telling Kutner about being a Chinese person with Caucasian parents. Kutner tells her he was adopted by Caucasians, too. The patient starts bleeding from the spot where blood was drawn and Kutner rushes her inside.

Wilson tries to recover the keys with a flashlight and coat hanger, but when Wilson hands him the flashlight House drops it into the sewer. Wilson has another flashlight.

Cameron is trying to decide what to give House as a sympathy gift. Kutner comes in to tell Foreman about the patient. Foreman orders a CT Scan. Chase figures House is a mess despite what he says.

House tells Wilson he doesn't think that John House is his biological father. He has a birthmark that matches a family friend, their toe length is reversed (big and second toe) and his father was away when he was supposed to have been conceived. Wilson reminds him that John could have taken a plane to see Blythe and conceived him then. House sees a cop and presses his cane on the accelerator.

The team is doing the CT. Kutner is telling Taub that the patient was adopted before her adoptive parents had three children on their own. They find a cyst on the pancreas.

Wilson is trying to talk his way out of a ticket. House is talking to his team while Wilson gets arrested. The cyst is large. House makes a "steamroller" metaphor, but the officer takes House's phone before he can finish explaining his thought. The officer tells Wilson there is a warrant for his arrest in Louisiana.

The team, being cut off from House, starts a differential about the cyst. Foreman figures they should focus on its size and location. Thirteen wants to concentrate on House's "steamroller" metaphor.

House is trying to get his phone back. He is also trying to convince Wilson he took care of the Louisiana matter. Wilson was charged with vandalism, destruction of property and assault in a bar he visited while in Louisiana for a medical convention. However, the officer finds out House is trying to delay getting to his father's funeral. The officer says he's not allowed to miss it if his mother is still alive.

Chase, Cameron and Foreman are talking about what House meant and both he and Kutner figured out that House thought the patient had gallstones.

Wilson is explaining to the officer what the warrant is about. It is revealed that House and Wilson met when House bailed him out after he was arrested. Wilson was walking around the convention with an envelope from his first wife's divorce attorneys, and House was interested enough to follow him. The officer lets them go when he finds out that Lousiana doesn't want to pay to get him back. The officer tells House to go pay his respects to his father.

Chase plans a cholecystectomy. However, he notices her urine has turned brown - it's not gallstones and her kidneys are failing.

House calls his team. He tells them the cyst is causing all the patient's symptoms. Thirteen suggest injecting bubbles into the cyst to see where they travel.

Wilson and House arrive at the funeral home.

Kutner realizes the patient is suffering from the DTs - alcohol withdrawal.

House's mother greets her son warmly. House is astounded that she held up the funeral until he arrived since his father was a very punctual man. She tells him to do the eulogy even though he didn't like his father. She reminds him the war is over.

Kutner is telling the patient and her parents that the patient has to be paralyzed to do a procedure, and that she will be going through withdrawal.

House still doesn't want to do the eulogy. House reveals he already confronted his father about his paternity, and that his father didn't talk to him all summer, passing him notes underneath his bedroom door if he had something to say to his son. House's mother introduces him to speak. House starts his eulogy and starts ripping into his father about how he treated people he had control over badly. He also noted his father cared about his job more than his relationships. He starts to break down, goes to his father's casket and kisses him on the forehead. However, Wilson realizes he's getting a DNA sample. He orders him to put it back, but House won't.

Wilson confronts House about his behavior, but he confronts Wilson about liking House's behavior and that he's scared to lose House. He demands that Wilson admit it, but instead, Wilson hurls a liquor bottle through a stained glass window.

Wilson and House go out for a meal. They talk about the convention and how House saw Wilson carrying around his unopened divorce papers all weekend. House calls the team, who tells him the ultrasound scan was grainy but there is a mass in the left atrium of the heart. House thinks the graininess is the result of an iron overload, which would also explain the other symptoms. House then calls the translator who was working for the patient in China to try to confirm that the birth parents also have haemochromatosis. However, the translator doesn't think they were the birth parent's despite the patient's belief that they were - they acted more confused than anything else. House wonders why the mother was frightened. Wilson suddenly realizes something - the patient is too young to be a girl born in China. She was born after China's one-child law came into effect and girls were routinely killed. He thinks the birth parents freaked because the father was supposed to have killed her and the mother thought she was dead. They start thinking about toxins.

House returns. The team hasn't done an MRI yet because she keeps vomitting. He tells them about the poison theory. House suddenly realizes they will kill her if they give her an MRI. They find pins in her head that were placed there to try to kill her. When she lifted the Buddha, it was kept in place by a magnet which shifted a pin and caused her symptoms. Kutner explains to the adoptive parents that a pin was in her addiction center, which caused her destructive behavior.

Wilson and House meet and House shows Wilson the results of the DNA test - he was right. He realizes his mother didn't like his father much either. Wilson tells House he's coming back to Princeton-Plainsboro Teaching Hospital. He admits that he has fun with House and that's why he hangs around him. The realization that his dad is dead sinks into House.