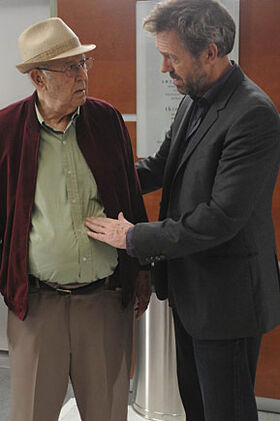 Both Sides Now is the fifth season finale of House which aired on May 11, 2009.

An obnoxious patron at a restaurant gets hit by dinner rolls each time he complains. Dining next to him is a couple named Scott and Annie. Scott pushes their basket of rolls away and holds down his left wrist. The patron assumes it was Scott who threw the rolls at him, so he confronts him. Scott apologizes and offers his right hand to shake hands, but his left hand pours a glass of water on the guy's pants. As the man grabs Scott, a tear of blood runs from Scott's eye and down his cheek.

House wakes up in bed, unusually happy. Gazing in the bathroom mirror, he sees a lipstick imprint on his face. There is a tube of lipstick on the counter.

In the ER, Taub and Cameron review Scott's file. The patient had his corpus callosum cut to correct seizures, but he has had some difficulty adjusting to a split brain. Taub and Cameron visit Scott, who explains how his left hand sabotages him. Taub mentions the wedding to Chase, and Cameron says that there has been a "glitch in the plans."

House arrives at the office in a good mood. Taub tells him that the patient has alien hand syndrome. The right hemisphere of the brain, which controls the left side, is misbehaving. They discuss the functions of the right brain, which is more creative. Cuddy enters and needs to talk to House alone. They go to his office and she reminds him that she his boss. Cuddy says that he can stay only if he behaves. House responds by looking at her lipstick in his hand.

House goes to Wilson to report that he slept with Cuddy and that she helped him detox. All Wilson can say is "Wow!" twice. However, House tells Wilson she is backing out. He urges House to talk to her.

Thirteen and Taub search through the patient's tiny bathroom and they find fungus. She lets slip that sperm is what is causing the glitch between Chase and Cameron. Later, Taub approaches Chase in the cafeteria and asks about Cameron saving her dead husband's sperm. Evidently, the word has spread. Chase thinks Cameron isn't ready to commit to him.

House takes infra-red photos of Cuddy when she arrives in her office.

Meanwhile, Annie brings Scott his personal items. His left hand grabs a bottle of deodorant and throws it against the wall. Thirteen enters with anti-fungal medicine for Scott to take orally. Annie leans in to kiss him goodbye and his left hand smacks her. She hurries out, and as he goes after her, he falls to the floor. He can't walk.

House suggests that a meningioma could be growing a connection between Scott's two brain sides. They can test for that.

House shows Wilson two photos of Cuddy to prove that she is heated around him -- it must be love. House needs to know whether Cuddy was lying to him last night or today. House wants Wilson to talk to Cuddy about it. Wilson advises him to act like an adult if Cuddy matters to him at all.

Scott is in an observation lab in front of a large computer screen with a plus sign in the middle. Foreman tells him to focus on the plus sign. Any image on the far right will be seen by the left brain, and reverse for the right brain. Scott reads off the words on the far right. He misses the word that appears on the left. Although he did not see the word 'candle,' he is able to draw a candle when asked to draw a picture of what he saw. There is no communication between the hemispheres. They flash 'stand up' on the left screen and he stands up, making an excuse for doing so - that he is cold. As House and Taub argue about the need for a right hemisphere, House notices the patient is really cold. House smells ammonia on Scott's breath, which means his liver is failing.

House enters Cuddy's office where she and Wilson are working, and he asks for approval of a liver biopsy to test for sarcoidosis. She agrees immediately because it's a safe test and accuses House of wasting her time. House puts his coffee cup on her desk. After bickering with Cuddy about clinic hours, he picks up her cup instead and walks out.

Taub and Thirteen prep for a liver biopsy to check Scott for sarcoidosis. He apologizes for his sweat and body odor, and his left hand pushes the ultrasound wand away. Scott asks for music.

Wilson confronts House about using his relationship with Cuddy as a substitute high for vicodin. House tells him that he discovered oxytocin on Cuddy's coffee cup, a hormone used in emotionally bonding. He plans to irritate Cuddy to the point where she will reveal her true feelings, or kill him in the attempt. An old man is waiting in the doorway to House's office. Cuddy sent him. The man is from the clinic and tells House that he squawks like a parrot and his wife can't stand it. However, the man can't duplicate the noise exactly.

Scott's two hands are tested as he plays air guitar to the song "China Grove," by the Dooby Brothers. Thirteen notices splinter hemorrhages under his fingernails. Suddenly, Scott vomits up blood. In the team meeting, Foreman suggests a clotting issue. Thirteen says that they already put him on heparin and his heart echo proved fine. The patient also tested negative for Factor V Leiden, proteins C and S. House comes up with pancreatic cancer and orders a scan of Scott's pancreas.

Cuddy is meeting with wealthy philanthropists when the old man, sent by House, brings in a bag containing his stool sample. Meanwhile, Scott is packing up to leave the hospital. Annie broke up with him after he hit her. Taub and Thirteen try to convince him that he needs to stay. Scott gets angry and throws the deodorant against the wall again. He left hand unbuttons his clothes, because his right brain seems to know that he needs to stay.

Cameron talks to House about her dilemma. He thinks she should get rid of her dead husband's sperm. This frightens Cameron because of her doubts. Taub comes to have House check on Scott. However, House stops to get Wilson. He wants Wilson to try to talk to the patient's two fighting brains like a relationship counselor to get the two hemispheres to work together.

In the control room at Scott's MRI, Wilson talks to the patient over the microphone. Taub says that the scan is clean; there is no pancreatic cancer. Wilson suggests stating out loud what he plans to do.

Back in the office, the old man calls House on his cell phone to do the squawk. Cuddy gave him House's private cell phone number. House hangs up to get back to the diagnostic. Taub suggests lymphoma but House insists on the pancreas but it might be too small to spot. He wants to try a new procedure that paints infrared onto cancer cells. Foreman points out that the procedure could make the clots worse. Thirteen warns that Scott's brain MRI showed narrowing in the blood vessels and shaking a clot loose could kill him. On the other hand, they note that killing one hemisphere may improve his condition.

Scott is conflicted with himself over doing the procedure. Chase and Foreman perform the surgery on Scott as Cameron comes in to talk to Chase. She says that she wants to be with Chase, and she will destroy the old sperm. However, the procedure finds no cancer.

Wilson catches House in the lobby. He wants to know if House really wants Cuddy, or is this just another challenge? House accuses Wilson of being afraid that House won't need him anymore. Wilson tells him if he's serious he better do something or one of them will get hurt. Below them from the balcony, a male stripper follows Cuddy as she leads him out the hospital door. Yet House is displeased because Cuddy isn't angry. Suddenly he realizes something.

As Scott's surgery continues, his blood pressure falls. House walks into the gallery and tells Foreman that the clots are not from cancer. They are from the heart. If they are caused by an intermittent arrhythmia, then they missed it. He wants them to do a transesophageal echo. They find that the left atrial appendage is damaged.

The team throws out various causes of the blood clots. Thirteen suggests Cushing's, and House tells her to run a dexamethasone suppression test. After the team leaves, House examines the coffee cup that he stole from Cuddy.

Taub and Thirteen are tending to Scott when Annie walks in the room. She thinks maybe the deodorant she had brought to him caused his anger, and perhaps it has meaning. Scott did throw it out again with his left hand when he was packing up. Scott explains that he has to use it often because it is an extra strength formula. Taub and Thirteen will look into it. Scott moves his left hand up to Annie's face and touches it lovingly.

House brings the coffee cup to Wilson, wondering why there is no lipstick on it when clearly Cuddy was wearing it. Wilson says this is not a medical case to analyze. If he can make Cuddy really angry, then it will help because they will open up. He accuses House of not trying hard enough.

Meanwhile, Chase asks Cameron if she truly wants to destroy the sperm of her dead husband. They realize that she does not have doubts about Chase. She just doesn't want to lose the last remainder of someone she loved. He tells her she doesn't have to get rid of it.

From the lobby balcony, House announces to the crowd in the hospital that he and Cuddy had sex. Cuddy is finally angry.

Cuddy finds House in the hallway. He suggests they move in together. She fires him. This isn't what House expected. The old man patient, waiting in House's office, tells him that he thinks Cuddy likes House. House snaps at him that he has acid reflux and writes him a prescription. However, he realizes that the old man's belt makes his belly sore. He has a tumor, and this is why House thought of pancreatic cancer for Scott. Taub reports to House that Scott's deodorant is high in propylene glycol, which caused the seizures and heart problems. House asks him to take the old man to radiology for a pancreatic scan.

House enters Cuddy's office as she is prepping for a presentation. He asks her about the other night, yet they are talking about two different things. Cuddy is angry that House had said for her to "Go suckle the little bastard child who makes you feel good about yourself." House's version had them coming together to detox him. In reality, she had just walked out of her office for the night. House is confused. None of what he remembers actually happened -- no detox, no sex with Cuddy. He shows her the tube of her lipstick, but when he uncoils his hand it is really a bottle of Vicodin. Concerned, Cuddy leans in to House. House thinks it is Amber and Kutner speaking to him. He admits that he is not OK. Cuddy brings House to Wilson's office.

Most of the team is in attendance at Chase and Cameron's wedding. Yet Wilson drives House to the Mayfield Psychiatric Hospital. House enters the hospital on his own.

The title for this episode might come from any assortment of these facts: