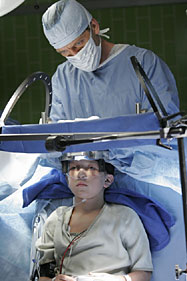 Cane & Able is a third season episode of House which first aired on September 12, 2006. The team treats a young boy who believes he has been abducted by aliens.

A seven year old boy is sent to bed, but he's expressing fear of someone coming to get him. His parents dismiss the idea. He turns on the TV without his parent's permission, and all of a sudden it goes out to his shock and dismay. The room starts to shake. A bright light is seen outside and the window flies open. When his parents go to his room to look for him, they find an undisturbed room, but no child. They eventually find him unconscious on the lawn in his pajamas, with a large blood stain on his posterior.

House is getting ready to go jogging, but all of a sudden returns to his room and grabs his thigh. He goes and gets some Vicodin and changes into his work clothes. He meets Wilson and Cuddy at the entrance and lies about his leg pain. Wilson and Cuddy are suspicious. Wilson blames it on the ketamine treatment failing, but Cuddy thinks his confidence is shot because he didn't know he cured the patient in the previous episode.

Chase performs a bleeding test on the patient. The patient is afraid the aliens will get him because there is a chip in his neck. He then describes a procedure the aliens perform on his chest. Chase pretends to remove the chip, but the patient realizes he just pinched his neck.

Chase tells the team about the level of detail of the hallucinations. The patient is clotting normally. House thinks Chase screwed up the bleeding test. He orders Foreman to re-do it. Foreman re-does the bleeding test and the patient now bleeds 25 minutes without stopping. Cameron wants to run tests on clotting factors.

Chase goes to see the patient, but he isn't in his room, his mother having fallen asleep. Chase reports to House, who jokes that they should check nearby solar systems. They find the patient in the stairwell, using a knife to get the chip out of his neck. While Chase is stopping the bleeding, he finds a piece of metal in the patient's neck.

The metal is removed. House jokes it is an unknown metal, but it turns out to be titanium, probably from the pin used in the patient's surgery from a broken bone. Chase wonders how it got into his neck. However, it is noted that although the patient was digging into his neck with a knife, the patient's blood clotted normally. They proceed with a clotting factor test of the blood. The parents think it might be psychological.

The patient thinks his parents think he is crazy. Chase reassures him. However, as he draws blood, the patient starts hallucinating that Chase is an alien and has a seizure. The patient's blood pressure shoots up. The blood test shows it is a bleeding disorder, but doesn't explain how the blood did clot on two occasions. Cameron thinks that the high blood pressure was assisting the clotting. However, the only explanation for the high blood pressure is a heart problem. Chase asks the parents if they think their son is crazy, and they believe he might be.

However, the review of the heart shows no problems. House views the heart images on a large high-def screen in the lecture hall. He notes that part of the heart isn't beating. House jumps to point to the spot, and winces in pain when he lands on his right leg.

They scan the DNA of the patient and the defective part of the heart. They are different. Chase suggest alien DNA. They discuss how his DNA might have been changed, but House dismisses them all. Cameron thinks House is in pain. Chase says it's not important how his DNA got changed, it just has to be removed. Cameron suggests tagging the DNA from the bad part of the heart with a protein that binds to it. House agrees.

They perform the test and find the marked DNA in his bone marrow, heart and eyes. Cameron realizes the patient's bad vision is also related to his disease. Cameron reveals to Foreman that House cured the previous patient.

They go to remove the foreign DNA with surgery. The patient recovers quickly and his vision improves, showing the surgery was a success. They plan to discharge him.

However, while the patient is sleeping, he once again starts hallucinating that the light is outside his window. He starts having a seizure.

They realize that there is still foreign material in the brain - the tag didn't penetrate the blood/brain barrier. However, the patient's brain appears to be clean. House wonders if the tag might not work in the brain. House goes off alone to think. He comes back and tells them to discharge the patient. House thinks it still might be a nightmare and there is nothing more they can do until the patient shows symptoms.

Cuddy confronts House about giving up on the patient. He reminds Cuddy that he failed on his last case. Cuddy tells him to keep working. House tells her that amputation might be the next step, and is astounded when she doesn't object. He asks her what she's done wrong. She admits that he was right about his last patient. He starts telling Cuddy's imaginary baby that her mommy's in trouble, when something comes to him.

House has hit on an idea - the patient was the result of in-vitro fertilization. In rare cases, they implant two embryos and one gets absorbed by the other - Chimerism. The absorbed twin's DNA is asserting itself and has to be removed.

House goes to tell the parents that the twin's DNA is expressing its own thoughts. House plans to stimulate a hallucination and cut out the portion of the brain where the neurons are active.

Chase explains the procedure to the patient and start stimulating the brain. The patient starts seeing the lights, but his blood pressure starts rising as they increase the voltage. They still can't see any detail. House finally threatens the patient with abduction and torture. The hallucinations become stronger and the affected neurons light up. House starts to remove them, and slowly the patient starts seeing only the doctors.

House goes to Wilson about Cuddy lying to him. He's realized Wilson put her up to it. House wants to know why he did it. Wilson was afraid he would think he was God and his wings would melt. House points out God doesn't limp.

House goes home and gets his cane out of his closet.

Cameron is working in the clinic when she meets the patient who was in a vegetative state in the previous episode. She is shocked when she finds out it was only Addison's Disease. The patient is looking for a "bucket full" of Viagra so that he can make love to his wife - frequently.

Cameron confronts Cuddy about not telling House. She tells Cuddy that House is not himself: he's depressed and he is in increasing pain. Cuddy promises to see what is causing the pain.

Cuddy goes to see House. She wants to do a PET scan of his brain to see if the pain is a problem. House keeps talking about her breasts, but she denies being pregnant.  Cameron again tells Cuddy and Wilson that House is in pain and she will tell him that he cured the patient unless they get him to agree to testing.

Wilson asks House to come running with him, and gives him a bottle of Vicodin to allow him to exercise. When House rejects it, Wilson accuses him of being afraid the treatment didn't work. He reminds House he isn't always right. House goes to work on a treadmill, but is in severe pain after a short time. He reaches for his Vicodin. He limps back onto the treadmill and continues to exercise.

Chimerism is exceedingly rare, far rarer than conjoined twins. There have only been 40 reported cases in human beings, although it is more common with in vitro fertilization than it is with fraternal twins.