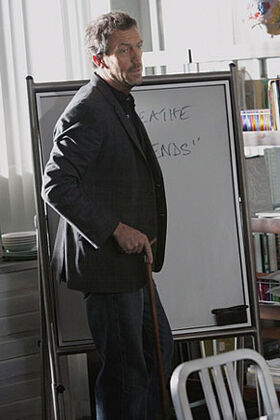 Clueless is a second season episode of House which first aired on March 28, 2006. A man who started having trouble breathing while role playing with his wife is quickly diagnosed with Lupus by the team, but House thinks that the wife may be poisoning him. Meanwhile, House and Wilson discuss the terms of their new living arrangement.

While doing a rape roleplay with his wife, a man starts choking and turning blue.

Meanwhile, House is awoken by Wilson blow-drying his hair. House confronts Wilson and asks him to move out.

The man is rushed to Princeton-Plainsboro where he quickly recovers from the swelling that was blocking his airway, and is referred to Dr. House where Cameron examines him after the other doctors are stumped as to the cause. The couple admit they were engaged in sex play at the time.

Foreman thinks it might be trauma, but there is no sign of it. Cameron says the patient and his wife are very open about their lives, but House is doubtful and automatically assumes they are really unhappy - he bets $100 and Cameron takes the bet. They continue the differential. House tells them to make sure that his lungs are all right.

Cameron tests the patient's lungs and talks to the wife about their sex life. The wife puts down failed relationships to people who cover who they are during dating. The tests show insterstial pulmonary fibrosis, but the team can't find the cause. House adopts a waiting attitude and is right - the patient starts getting an unbearable itch.

House continues a new differential for the lung scarring and the rash while he heads into the men's room. Foreman and Chase follow. Foreman suggests Lupus, and Chase suggests a food allergy. Cameron is forced to join the others in the men's room. House believes heavy metal poisoning is the only thing that could cause both symptoms. However, the source of exposure is still a mystery. House orders a medical history, an environmental scan of the home, and blood tests for lead and arsenic.

House comes home to Wilson eating a meal. Wilson has found an apartment he can move into the following Monday. They discuss their respective eating habits. They start talking about exposure sources for lead, ruling out the possibility that he was exposed to lead glazed ceramics while on vacation.

Foreman and Cameron go to the patient's house and start testing and asking the wife questions. All Foreman can find is that there are ants in the house. House wants to know what type of ant they are, and rules them out as a source. There is no other source of heavy metals. House is still convinced that it is heavy metals and tells the team to start treating him for lead poisoning.

Suddenly, the patient's feet start hurting severely during the allergy tests. Foreman suggests Lupus again, but House brushes it off. Soon after, the patient is not breathing again. The team has to perform a tracheotomy.

The patient's urine tests show elevated proteins which again suggests Lupus. Foreman insists on starting the treatment and then testing to confirm the disease. House still thinks it is heavy metal poisoning. The patient tries to console his wife.

Wilson confronts House about eating his lunch. While discussing the clinic patient, House starts to suspect the wife is poisoning the patient as the patient is getting worse. House thinks it is a rare heavy metal - one that they don't usually test for. House tells Cameron to search the wife, but Cameron refuses and House goes to do it himself. The wife agrees to the search, except for her vagina.

House goes to Cuddy and argues with Cameron about whether the wife is guilty. Cuddy refuses permission to do a body search of the wife.

House talks to Wilson about his theory. Wilson talks to House about his wife, and how she fired the maid. Wilson offers to pay to let the maid clean House's place as he feels bad that his wife fired her. The husband has a cardiac arrest and Wilson doubts House's theory on the basis that the wife's concern looked real.

The team starts another differential diagnosis. House thinks it might be a viral infection. There is no fever because the patient's immune system is suppressed. He orders interferon. The wife resists, but given the patient's organ failures, they don't have any other possible treatment.

The patient admits that he cheated - he sat behind his wife in the 9th grade and copied her test. She admits she let him cheat.

The interferon doesn't help. While with the clinic patient, the clinic patient's wife removes her gold ring. House tells Cameron not to let the wife use the bathroom. He rushes home to get his boyhood chemistry set. The wife finally insists on going, just as House returns. House finds her in the ladies' room. He tells the wife about how he hunted for treasure in Egypt as a boy, and stannous chloride turns gold bright purple. He looks at her fingertips, which shows she has been using gold sodium diamylate, an arthritis remedy available where she traveled in Mexico, to poison her husband. Chase comes in to say that the husband's blood test for gold was off the chart.

The patient is giving chelation therapy. He still needs a lung transplant. Cameron thinks House is gloating about being right, but he denies it. He still takes Cameron's $100.

Foreman is given the task of telling the patient about how he got sick. House gets a message that Wilson's new landlord needs a better offer, but erases it.

A patient has trouble urinating. He is diagnosed by House with herpes. He tells House the only person he has had sex with is his wife, and House puts the patient and his wife on a prescription. House guesses the wife is cheating with the daughter's karate instructor.

The wife comes in and denies the affair or giving her husband herpes. House wonders if the husband was looking for an opportunity to blame the wife for giving him herpes after he caught it from another woman.

House meets the husband and wife and as they blame each other, House suggests one of them might have gotten it from a toilet seat. The wife rejects the suggestion, but the husband agrees it might be a possibility. House believes the husband's belief it based on trying to get an out while the wife's refusal to believe it is based on her innocence.

Heavy metal poisoning is very common, but gold poisoning is very rare. Even people who work around gold (such as miners and jewellers) are unlikely to contract it. The body actually has a fair tolerance for gold (small amounts of gold leaf are often added to expensive high end deserts as a garnish). A lethal dose is around 50 to 500 mg/kg, meaning a person weighing 60 kg can be killed with 3000 mg of gold[1]