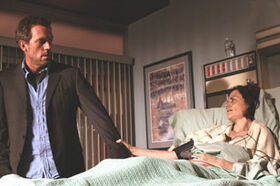 Control is a first season episode of House which first aired on March 15, 2005. It introduces one of House's nemeses, Edward Vogler.

During a presentation, a powerful 32 year old woman CEO starts suffering headaches and leg pain. She cuts the meeting short because she can no longer move her leg and messages her assistant.

House explains the case to the team. The patient has intense pain in her leg, which prevents her from moving it. Cameron immediately thinks leg infarction, the exact condition House suffered from. When Cameron starts being assertive, House realizes she has been reading negotiating books. House orders blood thinners.

Cuddy is busy introducing Edward Vogler to the rest of the board of directors. He has donated $100 million to the hospital on the condition he have a say in how it is spent. Vogler tells the story about how he became a billionaire and his relationship with his father and how his father became incapacitated with Alzheimer's disease.

Chase asks the patient for her cell phone so he can x-ray her leg. He starts flirting with a resident.

Vogler sees House playing with a yo-yo. He starts asking about him and how he dresses. Cuddy assures Vogler that House is a good doctor. Cuddy goes to House to tell him to wear a lab coat. House accuses Vogler of using the hospital's patients to run clinical trials. Cuddy defends the practice but House points out that it is incompatible with the hospital's purpose. Cuddy notes that House has ethical lapses all the time.

Foreman tells the patient they found nothing wrong, and it was most likely a clot that resolved itself. However, the patient starts having terrible pain.

The team starts discussing Vogler. They then get back to the patient. The muscle biopsy was negative. Cameron goes back to using her new-found negotiating skills.

Wilson suggests bone cancer and discusses Vogler's plans to do clinical trials. House thinks Vogler bought the hospital to get laid. House is not worried about Vogler (having survived three previous administration changes), and rejects Wilson's suggestion to put on a lab coat.

Wilson meets with the patient, who is meeting with her assistant. She knows he's an oncologist. Wilson thinks it might be colon cancer and suggests a colonoscopy and tells her it can be treated. However, the patient's mother died of the disease. She refuses the test. Wilson suggests they do a CT Scan instead - more expensive, but less invasive.

Wilson and House discuss the patient's reluctance to have intimate tests. House reviews the patient's angiogram, which was clean, but shows she literally has two left feet. House finds out Chase didn't do the angiogram himself and enraged by the screw-up, orders it to be repeated, this time by Foreman. Despite her vitals being strong, she starts having trouble breathing. She goes into respiratory arrest. The patient had pulmonary edema. However, the second angiogram also comes up normal.

House starts listing psychological symptoms on the board - withholding pain, control, and shame. He examines the patient and finds fine cuts on her body. He realizes that she needs a heart transplant. He goes to Wilson to tell him, but can't tell Wilson why she needs a new heart because he is on the transplant committee. The team comes to tell House, who already knows, that the tests show she needs a transplant.

House goes to the patient about the transplant, and confronts her about cutting herself. He realizes she is a bulimic, but she hides it with Ipecac, a drug that causes muscle damage, including the pain in her leg and the damage to her heart. She admits to taking it three times a week. House tells her that he is ethically obliged to tell the committee about her bulemia, but is willing to lie about it even though this would risk his medical license. He wants to know if she wants to live, because he's not sure. The patient tells him she doesn't want to die.

House goes to the committee and tells them that she has severe congestive heart failure. House says he put her on the transplant list because he had a hunch before the tests were in. Vogler sits in on the meeting. House denies there are any reasons to deny her a transplant. Cuddy warns him about misleading the committee. House still denies that the patient should be disqualified from getting a new heart.

Wilson asks House if he lied. House asks Wilson why he voted for the transplant if he thought House was lying. The transplant goes forward.

The team discuss what House will do to Chase for screwing up the angiogram. He wonders why House knew the patient needed a transplant, and why he isn't gloating about beating them to the punch again. Chase starts looking through the patient's belongings and finds the Ipecac.

House tells Cameron he wants Chase scared about being fired, but isn't going to fire him. Cameron keeps up with the negotiating skills until House tells her that people like her and don't dismiss her just because of her sex and looks. She asks House if he likes her, and he denies it.

The transplant is successful. House brings a sandwich to the patient. She asks why he fought for her. House just says that she's his patient, and not to screw it up.

Vogler comes to see House, who is listening to, and enjoying, "Baba O'Riley" by "The Who". Vogler turns off the music. He tells House that Chase found the Ipecac, and House acts shocked. House points out that they are not going to like each other, but although Vogler has money, House has tenure and Cuddy and Wilson to support him. He then starts playing "Hava Nagila", cutting it off when he realizes it's not dramatic enough. Vogler intimates that he can get rid of Cuddy or Wilson from the board.

House is treating a young boy, and finds out that his father had been rendered mute after knee surgery. House tests the father by scaring him, but the father stays silent.

House tells the father his son only has strep throat. He injects the father in the throat.

The father returns and House explains that his vocal cords were damaged when he was intubated during surgery - a rare complication. He gave him botox, which loosened the vocal cords. He realizes the patient is scared that he is going to lose his settlement funds. The patient admits by blinking twice that he can talk.