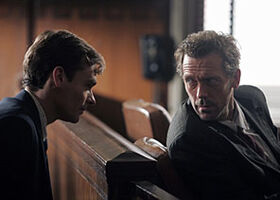 DNR is a first season episode of House which first aired on February 1, 2005. A famous musician with ALS loses all hope when he realizes he can no longer play his trumpet. However, House doubts the ALS diagnosis is correct and encourages Foreman to pursue an aggressive course of treatment. When House defies the patient’s “Do Not Resuscitate” order and is kept away from the patient, he still won’t let the matter drop.

While at a rare session, a legendary jazz musician with amyotrophic lateral sclerosis (Lou Gehrig's Disease) starts to have trouble breathing.

Foreman takes charge of the team, but House isn't taking him seriously. House asks about the paralysis, but Foreman points to the ALS diagnosis. However, House points out there is no definitive diagnostic test for it, and it is incurable. House starts a differential anyway, but Foreman shoots down the proposal because no other possible cause fits. House points out it's a death sentence, but Foreman says that doesn't make it wrong.

Foreman goes to see the patient, and tells him the pneumonia is probably related to the ALS. The patient learns House is on his case, and the patient asks Foreman for House’s opinion. Foreman disagrees with House, so the patient doesn’t consent to an MRI. The patient also asks for a do not resuscitate order, or DNR. Foreman can't dissuade him.

Foreman tells House about the DNR. Foreman is treating the pneumonia with steroids, but House wants him to treat for other conditions. Foreman starts him on House's suggested treatment, but doesn't tell House or the patient.

The patient goes into respiratory arrest as the result of House's suggested treatment. House comes in and finds the team obeying the DNR order. House starts resuscitating him anyway. At that moment, the patient's agent comes in and asks what is going on.

The patient is put on a respirator. Foreman challenges House over his efforts to save the patient. House says the only reason the patient signed the DNR was because he thought he had ALS; if he doesn't, he wouldn't want to die. Foreman storms out. House starts a differential with Chase and Cameron. However, at that moment, House is served with a restraining order. House orders tests on the remaining blood, and asks Chase to do a lung biopsy and move the patient nearer the clinic so the restraining order won't let him work there.

Cuddy asks House if he needs a lawyer. She's upset, but she has set aside money for legal expenses and she's under budget and she sees no point arguing with House. However, she informs House that Marty Hamilton is flying in to take charge of the case.

House goes to court over the restraining order. House's lawyer argues that they can't kill the patient because an assault complaint has been laid against him and he needs the patient alive to testify. House tells Wilson he's only going through the process to buy time to diagnose the patient. House impresses the judge by pointing out clubbing in his fingers which indicates a heart condition and tells the judge to seek treatment. The judge turns out to have a family history of the disease, and rules in House's favor - the patient can‘t be taken off life support until Dr. House‘s battery trial. However, House admits to Wilson he was only guessing about the heart disease and saw no clubbing.

House goes back to Chase and Cameron to ask them to treat the patient. House does it himself in defiance of the court order. He runs into the patient's regular doctor. He tells the other doctor he's treating the patient for Wegener's disease. Foreman has a reunion with Dr. Hamilton. House points out they can't kill the patient, but Hamilton tells him they have dropped the charges.

They disconnect the patient from the respirator, but he starts breathing on his own. This proves it isn't Wegener's. House admits he was wrong - again.

The patient is stable, but one of his arms is now paralyzed. The progression of paralysis once again confirms ALS. Cameron suggests a stroke. House notes that the restraining order is no longer in place and goes to see the patient. He asks the patient to let him complete a diagnosis. The patient agrees to indulge House's obsession, but since he can't play music any more, he feels he has no reason to live. The patient points out that diagnosis is to House what music is to him. At that point, House takes him to get an MRI.

Foreman is talking to Dr. Hamilton. He's asked if he enjoys working with House and if he's in a serious relationship. He offers Foreman a partnership at three times his current salary.

Foreman points out to his colleagues that he has a contract, but they tell him House wouldn't care if he left. At that moment, Chase finds evidence of a stroke, explaining the paralysis in the arm, but not the legs. They want to treat the patient with blood thinners, despite the risk of bleeding in his lungs, but the patient refuses. Foreman suggests directly removing the clot and the patient agrees because it won‘t affect his lungs. They do the procedure to remove the clot successfully.

Foreman goes to House about the difference between House and Dr. Hamilton. House isn't impressed with Hamilton’s faked humility, but Foreman points out House has been wrong on every step of this case.

The patient's arm function improves. Dr. Hamilton congratulates House, but at that moment the patient reports feeling in his leg.

House is glad the patient is getting better, but they have no idea why. Dr. Hamilton figures it is the previous treatment, but Foreman is sceptical. One treatment is definitely working, but they can't figure out which one. They have to try each medication one at a time, so they have to convince the patient's doctor to discontinue his ongoing treatment. However, Dr. Hamilton wants to know what medications House has been using. The patient has started getting worse. House orders another MRI and steroids.

Cameron points out that House would have to either let Foreman out of his contract to work for Dr. Hamilton or admit he needs him. Meanwhile, House is talking to Foreman about the job offer, telling him that if he thinks Dr. Hamilton is a better doctor, he should go and work for him.

The new MRI shows a malformed blood vessel compressing the spine, but previous radiology showed nothing. It turns out the abnormality's inflammation hid it from x-rays until they got the swelling down with the steroids. If they remove it, he will recover the use of his legs.

The patient is given surgery and regains the feeling in his legs. After physiotherapy, he is walking again and ready to leave the hospital. The patient thanks House, but guesses House's personality was still bad before House's leg got bad. The patient gives House his instrument on the condition he never play it. He then asks how many pills House takes. When House says he's in pain, the patient reminds him they all are.

House sees Foreman, and addresses him by his first name for the first time in an attempt to be more friendly.

A middle-age man comes in for Viagra. House figures out the patient has diabetes and that he has not been managing his condition. He tells him his impotence will go away if he manages his blood sugar. However, he gives him Viagra anyway.

Arteriovenous malformations aren’t rare, can cause paralysis to the effected area, and are often caused by scarring. It was even part of the differential diagnosis by both Dr. Hamilton and Dr. House.

Brandy Norwood appears as herself at the start of this episode. Brandy is an actress and R&B singer who has been in show business since she was 14, releasing her first album when she was 15. She has won over 100 awards as a recording artist.

Wilson uses the term “Rubik’s complex” to describe House’s obsession with solving riddles. The term refers to the Rubik’s Cube, one of the most popular puzzles of all time that was first invented in 1974 and is still one of the best selling games on the market.