Tạo lập Wiki
Damned If You Do 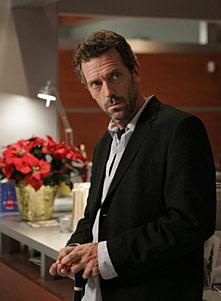 Damned If You Do is a first season episode of House which first aired on December 14, 2004.

House is hanging out with Wilson in the clinic trying to catch up on his charts when Cuddy insists that he see a patient. He walks in on three nuns, one of whom is suffering the symptoms of an allergic reaction on her hands which the other sisters think is stigmata. House thinks it's probably a reaction to dish soap and gives her an antihistamine, but after he leaves, the patient has an asthma attack. House administers adrenaline, which stops the asthma but the patient's heart starts racing and she goes into cardiac arrest.

Cuddy and House start arguing about whether House gave her too much adrenaline, but he denies it. Cuddy allows House to look for an underlying cause for the heart attack, otherwise she will have to report the matter to the hospital's attorneys for a malpractice case.

The team starts a differential. House thinks it is Churg-Strauss syndrome, a potentially fatal condition which would explain her symptoms. Chase doesn't like nuns and is rude to the patient.

Foreman is convinced that House screwed up and gave the patient too much adrenaline. However, House is convinced he gave her the right dose.

The team does an MRI, but they can't find any heart problems. The patient starts having religious visions, then has a seizure.

The tests show the patient is immunocompromised. Cuddy believes that it was the prednisone that House gave her, but Cameron points out that she only got two pills. They still think it might be an immune disorder - mixed connective tissue disease, so House orders the Prednisone discontinued, and that they put her in a hyperbaric chamber. Foreman points out that it could cause oxygen toxicity and they are not sure it is an immune disorder. Foreman goes to Cuddy about House's decision.

Another nun catches House in the chapel watching TV. She tells House that the patient is a hypochondriac. The patient is often let off work detail for her imagined illnesses. They sit there psychoanalyzing each other.

House and Cuddy are still arguing about whether he was at fault and Cuddy finally pulls House of the case on the grounds it will keep him from killing the patient.

Cuddy decides to treat the symptoms because there isn't an underlying cause - she blames House's care. Foreman defends his decision to go to Cuddy, but the rest of the team doesn't care.

House starts showing signs of doubt about the adrenaline syringe. House decides to go through the clinic records to see if there was another syringe with more than the recommended dose of adrenaline. Wilson points out that House can't trust his own records.

House comes back to Cuddy and tells her he's going to stop her from killing the patient. He tells her that the patient drank tea that made her ultrasensitive to adrenaline, which caused her to go into cardiac arrest. Cuddy and the rest of the team realize that House didn't make a mistake after all, and the other symptoms can be explained by an allergy. He gets the case back and they start talking about what she might be allergic to.

They put the patient in a clean room. Chase tells the patient that he went to seminary school, but his faith wavered. Incredibly, the patient goes into anaphylactic shock in the clean room. They eliminate anything else that was in the room.

The patient wants to return to her monastery. She says she's convinced the illness is a test of her faith. House thinks that she's running away from her problems like she always has. They have a philosophical discussion. She tells House she was on several types of contraception when she was 15, but still got pregnant. When she got pregnant, she blamed God, but then realized that she couldn't blame God. House finally realizes the source of the allergy might be inside her. The team do scans and find a copper cross IUD. She remembers she got a rash from washing copper cookware. They schedule surgery to remove the IUD.

The patient recovers quickly after surgery, and House points out that he gave her the right dose of adrenaline. Wilson points out the hyperbaric chamber would eventually have killed her. Cuddy comes around to wish them a Merry Christmas.

House meets with a patient who is suffering from bowel inflammation. House prescribes cigarettes twice a day.