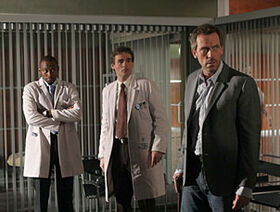 Deception is a second season episode of House which first aired on December 13, 2007. When an off-track gambler comes to the hospital, the team quickly diagnoses her with Munchausen's sydrome, but House thinks that there may be more fact than fiction to the woman's story. Meanwhile, House takes advantage of being supervised by Foreman.

A woman has a grand mal seizure next to House while he is at the Off-Track Betting house. The patient also shows severe bruising. He tells bystanders to call an ambulance to take her to Princeton-Plainsboro and that her doctor's name is House.

The team starts a differential, but the patient has no fever. House suggests Cushing's syndrome. Foreman starts ordering people around, including ordering House to get the patient's medical history. House runs to Cuddy who supports Foreman, who she put in charge the previous week. However, she then tells Foreman that if there's a screwup, it's his problem. He can't blame it on House.

House goes to the patient to take her history. He notes that the bruises are not tender. She denies taking medication. She also knows about Cushing's Syndrome, which she had the previous year, at which time they removed her pituitary gland.

Foreman orders House to do a lumbar puncture. During the procedure, the patient's blood pressure spikes. This would seem to confirm Cushing's, and House thinks it is a very small tumor. Foreman agrees to let House scan the patient.

Cameron is wondering why Foreman was put in charge instead of her. Chase thinks it is because she can't say no to House, and Foreman can.

Meanwhile, House is making Foreman's life miserable by doing unnecessary tests that Foreman has to review and noting that he can't sign off on dictation any more. Meanwhile, the scan on the patient confirms House's diagnosis.

Cameron tells the patient she has a mass in her pancreas that is likely cancer and that the survival rate is very low. The patient agrees to a biopsy.

Cameron talks to Wilson about the patient's reaction, which she found strangely detached.

The biopsy is negative for cancer. Cameron notes the patient has been hospitalized four times in four months and suspects the patient has Munchausen syndrome and she injected herself to cause her symptoms.

House and Cameron head to the patient's home. They find evidence of multiple doctor's appointments. House doesn't think it's Munchausen's. They argue with Foreman about the possible diagnosis. Foreman goes with House and allows him to do a brain procedure. House thinks it's only because Foreman is playing it safe, not because he believes House.

Cameron confronts the patient about the Munchausen's while she gets the consent signed.

Foreman confronts Cuddy about her decision, which he feels she only made to make House miserable. However, Cuddy is pleased that Foreman is doing all the paperwork and indicates that she might make it permanent.

The test results come back and don't make sense - the patient's urine is orange. Cameron admits that she left a bottle of pills in the patient's room to see if she would take them. It's obvious the patient did so in order to create symptoms to be treated - it is Munchausen's.

The patient denies having Munchausen's, but Cameron gives her a psychology referral and discharges her.

House notes that although the patient has Munchausen's, she always shows low HCT indicating aplastic anemia. He thinks it is anemia and asks to perform a bone marrow biopsy. He also sends some of her blood for testing, but there is not enough to get a definitive result.

Foreman goes to Wilson about House. He wonders if House would ever take him seriously as a boss. Wilson tells Foreman there is no way Cuddy will ever make him House's boss.

House can't convince Foreman to order the biopsy. Chase agrees to help House even though he agrees with Foreman. However, Cuddy waylays House and Chase by discharging the patient. House catches up with her and tells her he will help her with her aplastic anemia if she admits to having Munchausen's. She finally admits that she has been faking her illnesses. House gives her insulin and colchicine to make her pass out and give her the same symptoms as the anemia. He leaves her on a bench to be found by another passer-by as it would look suspicious if he brought her back in.

Naturally, the patient's white count is down when they examine her. Foreman agrees House was right and advises the patient of the diagnosis. The prognosis is either a bone marrow transplant or lifelong blood transfusions. She agrees to the transplant.

However, just as they go to kill her existing bone marrow, House realizes he was wrong. She has an infection because her self-induced Cushing's suppressed her immune system. However, this diagnosis doesn't explain the low white count. House suggest she took colchicine herself, but Foreman believes it was House who injected her. They explain to the patient that a bacteria, Clostridium perfringens, has taken advantage of her compromised immune system.

Cuddy tells Foreman he blew the diagnosis and, although House got lucky, that House gets lucky a lot. Foreman states that House doesn't just break bad rules, he ignores the rules. If all the doctors did that, the mortality rate would skyrocket.

House even suggests that Foreman be his boss to Wilson, but Wilson is of the opinion that House couldn't stand it.

At the end, we see the patient at another doctor, and House back at Off-Track Betting.

A patient comes to the clinic complaining that her contraceptive jelly is causing a rash. House sees that she is using fruit jelly. He prescribes antibiotics for the infection caused by the jelly and that "from an evolutionary standpoint", she never have sex again.