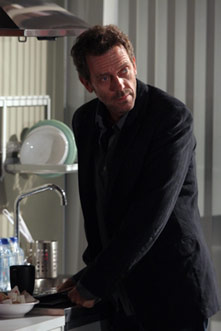 Detox is a first season episode of House which first aired on February 15, 2005.

A teenage girl convinces her boyfriend to let her take his father's expensive new sports car for a ride. However, during the ride, he starts coughing uncontrollably and coughing up blood. She narrowly avoids one accident, but they get into another.

House is waiting for his Vicodin at the pharmacy, but it is up in research. Cameron tells House about the boy - he is still bleeding three weeks after the accident, and he was bleeding before the accident. House figures it is inherited anemia. At that point, Cuddy comes by and looks at the file. She starts eliminating diagnoses. House gets interested and takes the case.

House gets the team together. The patient will be dead in days if they can't figure out what is wrong. House rules out an environmental cause because he isn't getting better in the hospital. However, they can't narrow it down and House orders a bunch of tests based on his team's suggestions.

House goes back to the pharmacy and gets his Vicodin. Cuddy sees him gulp down the pills and tells him there are other ways of managing pain. She thinks he is doing it to get high. She bets him a month of clinic duty that he can't give up Vicodin for a week. House agrees.

Cameron gets a medical history from the patient's father regarding his drug use. The patient denies doing drugs, but they test his hair. However, he's negative for drugs. The father denies anything in his history could have caused a problem. Cameron suggests Lupus. Cameron starts talking about cancer. They do a biopsy on the patient, which shows it isn't cancer. All the tests show negative. However, the patient is getting worse - he starts to lose his vision.

Foreman examines his left eye - he has a clot in his retina. They can't treat him with blood thinners or do surgery or he will bleed to death. House asks how a bleeding patient can start having a blood clot. Wilson comes in to keep House company during his Vicodin free week. House says he isn't going through withdrawal. The patient can't have an infection or cancer, which usually cause clots. House is distracted by a beautiful woman doing stretches outside his office. He orders his team to test for infections. However, the beautiful woman is just there to give him a therapeutic massage. House starts feeling better immediately.

The patient isn't eating because he doesn't like the hospital food. He figures the blindness will be permanent because they aren't treating it. The antibiotics aren't working, so House increases the dose. Chase suggests removing vitreous humor from the patient's eye to allow the clot to break up on it's own. The procedure goes well and the patient's vision returns.

The patient's girlfriend visits, and the patient starts vomitting. They take him to the ICU because his liver is shutting down. House snaps at the patient's father. The team thinks it is because of his pain.

His team discuss whether House should be working without his painkillers. House comes in to discuss the liver damage. Cameron points out it can't be anemia. House suggests hepatitis E. He orders a drug that will make him a little worse if he does have it so they can diagnose it. If he doesn't have hepatitis, he probably has Lupus, but if they treat him for Lupus if it is hepatitis, they will kill the patient. The team discusses what to do because they think House's orders are screwed up. However, Chase backs House up.

House is suffering from the lack of Vicodin. He deliberately breaks his hand to get his endorphines working.

The father won't consent to House's course of treatment. Cameron admits that she doesn't think it will work.

Wilson treats House, who lies about how he broke his hand, and Wilson catches him in the lie. Wilson figures House did it to overcome the lack of painkillers. Cuddy comes in to confront House about having Cameron recommend the hepatitis treatment when she didn't believe in it, and he has refused to treat the patient for Lupus. However, the father suddenly agrees to House's course of treatment.

However, before they can start the treatment, the patient starts hallucinating and starts bleeding again. The patient then goes into shock.

House starts vomiting on himself. Foreman asks what happened to House's hand. Foreman thinks it is withdrawal, House thinks it is pain. He gives House Vicodin to cover his own ass because he figures House can't function without them, and he will kill the patient.

They tell the father that it is Lupus and it is too late to treat him. The father is angry when they tell him that he needs a new liver. However, they will have trouble finding a transplant as the father isn't compatible.

The patient said "Jules" during his hallucination, which turns out to be the family's dead cat. House wants to know how the cat died. The girlfriend says the cat was 15 so it was old age. House says the patient doesn't have Lupus. House has Foreman and Chase exhume the dead cat. House starts an autopsy on the corpse.

House tells the team not to do the transplant. The patient has been losing weight and the napthalene has been stored in the patient's fat cells. When the patient lost weight from not eating hospital food, the napthalene was released. The father finds House and strikes him. House tells the father the cat has the same symptoms as his son. He also tells him that the new liver would suffer the same fate as the old one. They start feeding the patient to keep him from burning fat and go look for the termites. Foreman and Chase find a large nest in the patient's room.

The patient recovers. House goes a week without Vicodin, but realizes he is a drug addict and will be going back on the drug. He doesn't think the drug is hurting him; they allow him to do his job and take away his pain. Wilson thinks the opposite.

Wilson and Cuddy discuss the result of House's week off Vicodin. Although Cuddy made the bet, it turns out it was Wilson's idea to make the bet.