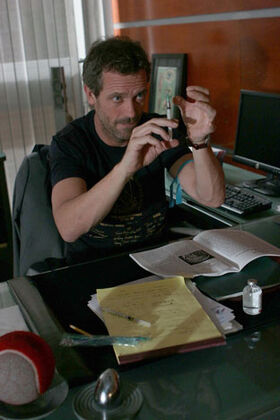 Distractions is a second-season episode of House, first aired February 14, 2006 in the United States. This episode was in the middle of season 2. A severe burn victim becomes Houses patient and they can not run most of there normal tests due to his condition. Meanwhile, House exacts revenge on a doctor that he went to medical school with by proving that his new migraine prevention medication doesn't work by giving himself a migraine.

The show opens with a pair of ATV motorists: the teenage Adam, learning from his father. Adam wants to drive the ATV, but his father refuses, recalling the paperwork they signed promising that Adam would not drive the vehicle. Dad eventually gives in and lets Adam drive the ATV up to 15mph. However, Adam appears to jam the throttle, accelerating to high speeds and eventually hitting a pile of large pipes. The ATV explodes and Adam catches on fire.

Adam is rushed to ER as House reads a Hindi medical article. Foreman brings House the report and notes that Adam's potassium is low, when it should be high. Foreman suggests that it might be amphetamines and House recommends an EKG. However, there is no skin to attach the EKG, so House recommends finding an old galvanometer. House peers through the window and sees Adam 40% covered in severe burns. House believes he has a good chance of survival unless his heart shuts down.

A nurse enters Cuddy's office and tells her an audio-visual setup is needed for a lecture from a doctor Cuddy has never heard of. Cuddy confronts House as he stands next to a man two years comatose, who he has apparently given a migraine. Cuddy is dumbfounded.

Cameron explains to the fearful father and mother that the reason Adam's heart is failing is because he may be on amphetamines. Foreman and Chase prepare to use the old-fashioned galvanometer instead. However, Adam suddenly begins to have a seizure, knocking over the machinery.

House and his assistants brainstorm on several diagnoses, including multiple sclerosis, adrenoleukodystrophy, and others. Transcranial sonography is eventually suggested by House to get a better idea of what's going on in Adam's brain as an MRI and CT Scan are out of the question because Adam can't be moved.

Meanwhile, Cuddy somewhat clumsily introduces a Dr. Weber for a lecture on headaches. Wilson notices House in the audience, disguised in a green coat, sunglasses, and a fishing hat. Wilson deduces that Dr. Weber was the Doctor that got House kicked out of Johns Hopkins for cheating.

In the operating room, Cameron explains that the eyes can be stimulated with imagery which can then be tracked with a sonogram as Chase and Foreman do so. Back at the lecture, Wilson and House are arguing when Foreman walks in and tells House that Adam has a cranial bleed. House finally interrupts Dr. Weber and has a long argument with him regarding the effectiveness of his migraine medication.

Cameron notices that Adam is awake and calls for an anesthesiologist. House injects himself with Webber's migraine medicine in order to prove him wrong once and for all, by also injecting himself with nitroglycerin, a migraine inducing drug. Cameron walks into House's office and informs him that Adam wasn't in pain, he actually had an orgasm while in the hyperbaric chamber while unconscious. House is about to reply but is suddenly overcome with a migraine headache, giving him both satisfaction about his correct conclusions and great pain at the same time.

Foreman gives House medicine for his migraine and prompts differential diagnosis on having an orgasm. Cameron notes how stressed Adam's brain must be from all the medication. Foreman and Chase begin applying maggots to Adam's burned chest to clean out dead skin and bacteria. Wilson confronts House about taking nitroglycerin to induce a migraine and it being a lose/lose situation. Wilson also deliberately screams and makes noise to put House into more agony.

The next morning, Cameron finds House sleeping on the floor under a table in his office, and gingerly wakes him up to tell him that the maggots didn't fix the problem although they helped the burn. House commands a spinal puncture at C2 and C3 (technically a cervical puncture, not a lumbar puncture) which has a large risk of paralysis but a lesser chance of infection. Consent is granted and Foreman preps for the puncture. During the procedure, however, Adam's blood pressure spikes and has a high risk of stroke. Foreman finishes the procedure just in time.

The tap was negative for MS and infection, but House enters the ward commanding for Adam to be woken up so he can speak with him. Adam is woken and is in extreme pain, only stopping yelling just long enough to tell House that he urinated in his pants just prior to the accident.

Afterwords, House claims he has to go to his office to "take an aspirin". We see House shower and begin to hallucinate. Cameron walks in and House claims to be "seeing music". Cameron examines him and immediately determines that House has taken something to get him high.

House re-enters the office cheerfully, claiming Adam has depression and is on anti-depressant medication, giving him serotonin storm. He speaks to the parents, who basically bet Adam's life on the fact that he's not depressed. House is about to wake Adam up again, but suddenly notices a small circular burn on his wrist and nicotine stains on his fingers. Although his parents are very open minded and supportive to the point of trying marijuana with him, they make it clear to House that they would "kill him" if they ever found out he was smoking. House explains that Adam has been smoking and is trying to quit, the "over the internet" anti-depressant drugs which are helping him do so are slowly killing him.

Cuddy bursts into House's office asking him if he took LSD. House "hypothetically" admits that he did, and that he also took anti-depressants to short-circuit it.  Weber soon storms in, complaining that House has ruined him and his clinical trials with his email to the pharmaceutical company saying the anti-migraine drug is a fraud.

Later, House invites a prostitute named Paula over to his house to "distract" him.