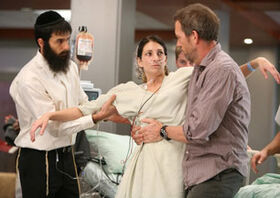 Don't Ever Change is a fourth season episode of House which first aired on February 5, 2008.

At a traditional Jewish wedding ceremony, the bride starts to feel ill, then realizes she is bleeding on her dress. She collapses.

Meanwhile, at Princeton-Plainsboro, House is challenging Wilson's decision to date Amber. House doesn't think Amber is needy enough for Wilson. Wilson bets $100 that he can make it last four months. Wilson thinks that Amber breaks his pattern of going for needy women.

The team presents the bride's case to House. Kutner already knew Amber was dating Wilson. The patient is suffering from low sodium and they discuss possible diagnoses. House thinks she may have tried to commit suicide by taking poison. However, House agrees to tests.

Foreman and Taub go to do an environmental scan and Taub says, although he's Jewish, he doesn't respect orthodox traditions like arranged weddings. However, Foreman discovers that the patient used to be a rock record producer. They talk to her and she admits using drugs and living a wild lifestyle before she converted to Hassidic Judaism.

The tests are negative. They start a new differential. House thinks her conversion to orthodoxy may be a symptom of an illness - porphyria. When they bring up Taub's choice to give up his plastic surgery practice to work as a fellow, Taub admits that people don't change on a whim.

They try to treat her for porphyria and have to admit they think its that disease because she's now religious. The husband objects and asks for a new doctor. Cuddy wants to treat her for another possible condition. She argues changing lifestyles is a good idea if you don't like your life.

Meanwhile, the patient has a respiratory arrest, showing Cuddy's possible diagnosis is wrong.

The patient stabilizes, but porphyria is eliminated as a diagnosis. The team thinks it is Wegner's disease, but House rejects it because he still thinks the conversion is a symptom. Thirteen fights him on the point. House orders a stress test.

House deliberately runs into Wilson and Amber at a restaurant. Amber calls House "Greg". House calls her "Cutthroat Bitch". She invites House to join them and goes to get a table. Wilson agrees that she's very forceful. Amber gets them all a table. House realizes that Wilson likes Amber because she's forceful. House then realizes to his horror that Wilson likes Amber because Amber is just like House.

They perform a stress test on the patient. The husband starts to worry that treatment will change her back to the person she was before she converted. Taub and the husband talk about how much you should love your spouse when you get to know them better. The patient's heart is fine, but her leg is in pain when she gets off the treadmill and she falls. They start looking for blood clots which could explain the leg pain.

They do a scan of the patient's brain function and Foreman and Thirteen discuss how the brain works. Foreman reveals that he believes Thirteen is bisexual and that's why she keeps things secret. The MRI shows no clots. House then orders them to put the patient in pain to determine if she is a masochist as it may be relevant. When they put her in pain, her pleasure centers light up. However, the patient says she was praying at the same time because she knew Foreman was going to do something bad. The patient's vital signs then crash, then stabilize. House orders them to put her on her feet, and she collapses again, but after she collapses she's fine again.

They start a new differential, but the team still thinks the conversion isn't a symptom. Kutner thinks it might be a heart arythmia and House agrees to the test.

Wilson admits to House that he likes Amber because she is like House, but House tries to deny it. He calls Amber a needy version of House, but Wilson admits that he was dating her long before House fired her. Wilson starts wondering what House is trying to avoid.

They start a scan of the heart. Kutner tells House about his love of Star Trek. The patient is under sedation and starts talking, telling them not to gossip. They can't find any arrhythmia. She tells them that Foreman thinks Thirteen is bisexual.

House asks Cuddy to sleep with Wilson to save him from Amber. She declines saying she has to sleep with people in accounting. House says Wilson't pattern is to save a woman before betraying them. Cuddy thinks Amber will take House's place, but tells him not to worry.

They test the patient's central nervous system by seeing if she sweats appropriately under stress. The husband doesn't want to be there because he might see her without her clothes on. All of a sudden, the patient has a seizure.

They realize the patient had hypothermia even though she was in a warm room. They realize that her body is doing the opposite of everything it's supposed to do. They think it might be Addison's disease.

Cuddy talks to Wilson about Amber. He say's he enjoys being with her. Cuddy tells him that Amber will always look out for herself before she looks out for him.

The cortisol makes the patient feel better. She tells her husband that he's much better looking that she was lead to believe. All of a sudden, the patient goes into shock. The patient is bleeding internally, but they can't find the source. Chase suggests exploratory surgery. He admits that this won't cure her if they find the bleed, but it will keep her alive. She won't have the surgery until after sunset and the beginning of the sabbath, so that she can enjoy at least one ritual meal with her husband. However, her rabbi, as well as her husband, want her to proceed right away.

Chase goes to speak to House about the patient, and he invites him to sit in on the differential. They discuss why the patient is refusing surgery. Chase suggests that they speed up the clocks in her room. They take her to surgery by darkening the hallways.

Amber comes to see House at his request. He offers her a job if she solves the patient's case as long as she dumps Wilson. She says she's with Wilson because he both loves and respects her, and tells House she doesn't want the fellowship. However, she guesses DIC, although House rules it out because the patient's platelet count is normal.

The team suggests more diagnoses, but House has a reason to reject them all. However, House gets an idea. Before they start the surgery, he makes her stand up again. While she's standing, he grabs her right side, and she feels better. He lets go, and she collapses again. She has a floating kidney - it's not properly attached to the rest of the body. It dropped a few centimeters every time she stood up. They always scanned her lying down.

House goes to Wilson and says he could do worse than a female version of House. Wilson asks if House believes people can change. House denies it, but Wilson believes that House might be self-sacrificing for Wilson's benefit, but he denies it.