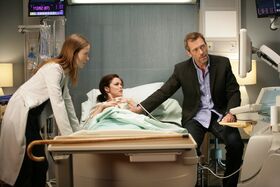 Dying Changes Everything is the premiere episode of the fifth season of House which, and aired on September 16, 2008.

In grief over Amber's death, Wilson contemplates resigning from the hospital. When House reacts by telling him to get over it, their friendship is strained to the point where Cuddy has to be called in to do the equivalent of couples counseling. However, when push comes to shove, it appears that House may have to choose between his friendship with Wilson, the life of his patient, or his job at Princeton-Plainsboro.

A boss and her assistant arrive at a meeting. The boss starts speaking to a meeting about the audience's lack of women in the executive office. All of a sudden, her assistant starts screaming that she's covered in ants.

Meanwhile, House is enjoying a video game (Ninja Gaiden II) in the coma patient's room. Cuddy comes in to say Wilson has returned after two months away. She pulls out his video game. House says he hasn't spoken to Wilson since Amber died. Foreman comes in with a new case - the assistant ripped off her clothes during the meeting. House thinks its a mental illness, but Foreman shows real symptoms. House is interested, but Cuddy wants to give the case to someone else, so he can deal with Wilson. House takes the case anyway.

He starts a differential with the team. They wonder why he isn't speaking to Wilson. They note the assistant travels a lot, so it might be malnutrition. When Thirteen suggests cancer, House discloses her Huntington's diagnosis. He sides with Taub that the patient has B-12 deficiency.

Thirteen denies to the team that she has Huntington's. She then goes to see the patient to tell her about the B-12 deficiency, then tells her to get back in bed because she needs rest. All of a sudden, the patient feels a sudden urge to go to the washroom, but Thirteen finds that she's bleeding.

House goes to see Wilson to talk about Thirteen. Wilson tells House he's resigning. House tells him that his reaction is typical of bereavement. When Thirteen comes in to talk to House, House sends her away. Wilson rejects House's advice and goes to wrap up his practice.

Taub is not as concerned about House's indifference with the case as Thirteen is and concentrates on why she is bleeding. However, he can't find a bleed anywhere in her digestive tract. However, Kutner finds that one of her routine tests shows she is pregnant, which explains her symptoms. However, when they do the ultrasound, they can't find a fetus.

They inform House of the inconsistency - positive pregnancy test and no pregnancy. Foreman wonders why he isn't more interested. House finally starts a differential. He tells them to keep going while he sees Wilson. He once again confronts him about leaving, but Wilson thinks he's being insensitive. The team comes in and finds out Wilson is leaving. House ignores his team and tells them that she must be pregnant.

House goes to do the ultrasound again himself. He finds she's 37, and then he finds the fetus has dropped too far - it's taking blood from her intestines to cause the bleed. He tells them to remove the fetus. Thirteen confronts him in the hall about trying to save the fetus, but he reminds her it's too dangerous. He then reminds her she can't let her Huntington's color her every diagnosis - people die. Thirteen goes to see the patient, who readily agrees to the abortion.

House goes to see Cameron about Wilson. She reminds him how grief is unique to everyone. He tells her that everyone suffers grief, but you have to get over it. Cameron tells House that when her husband died, she too moved and got a new job.

Chase operates to remove the fetus. The patient starts bleeding. Chase orders them to squeeze the spleen to start platelets flowing, and the crisis ends. He successfully removes the fetus.

The patient is not recovering well from surgery - she keeps blinking and her heart slows dangerously. The team realizes that the pregnancy may have been just a coincidence.

House goes to see Wilson again, threatening to stay home until he agrees to stay. House gets a page that the patient is in cardiac arrest, but he leaves the pager with Wilson and goes home. House's team wonders where he is.

They fit the patient with a pacemaker. Cuddy takes over the case and tells the team that she has confidence with him. Thirteen thinks they can do it themselves and suggests multiple sclerosis. Foreman orders interferon.

Cuddy goes to see House. He says he told Wilson he was sorry, but Wilson didn't believe it, probably because House didn't. She tells Cuddy to fire him if she doesn't like the fact he left the patient. When Cuddy confronts him, he slams the door in her face. She tells House that he's running away too.

The patient admits to Thirteen that her boss would get along just fine without her. All of a sudden the patient starts shivering and has a fever. That means it can't be multiple sclerosis.

Cuddy has House's cable cut off so House goes to confront her. She's cut of his TV entirely. Wilson arrives and Cuddy threatens him with not telling anyone else what his salary is, making a job search impossible.

The team is arguing while watching the surgery video, but Kutner spots something. He thinks it might be a ganglioma, a broken bundle of nerves.

Cuddy tells Wilson and House to talk it out, but they both refuse. When Cuddy confronts Wilson, he walks out, reminding them that no-one but him even liked Amber.

Chase doesn't want to do a second major surgery because he doesn't think she has a ganglioma and she won't survive a second general anasthetic. Thirteen says Chase would do it for House, he agrees he would, but still won't do it. Kutner comes up with another idea - coming in from the side - painful but no surgery risk. The patient wants to speak to House and reveals that she's been fired. However, she doesn't seem to care and Thirteen wonders why she agrees to be treated like a doormat. The patient says that's its better to be close to the birds than to wish you had wings.

They perform the procedure on the patient and find the suspected site for the biopsy. Foreman cuts off a piece.

Cameron finds Wilson to tell him he shouldn't go. She says she first refused to talk to him, but also agrees that House is right. She tells him the pain doesn't go away, but making a big change doesn't help either. She keeps thinking of her husband all the time. She tells him to do something, but not to leave.

The biopsy shows it might be amyloidosis. However, they still have to find the cause. Foreman asks Wilson to call House. He thinks it's impossible to rule out lymphoma. Foreman agrees to start chemotherapy. He then tells Wilson he thinks he should leave if he wants to because everyone else is just afraid to lose him and don't care what he wants.

The patient starts to feel better on chemotherapy. Thirteen apologizes for getting angry with the patient. The patient thinks Thirteen might actually excel, but she reveals that she has Huntington's and will start to deteriorate soon. The patient realizes she wants to make a difference. The patient tells Thirteen that she's applied for a new job.

House find a remote in the clinic. Cuddy wants to know why House is afraid of losing Wilson, but he ignores her. He thinks of something - she looks much older now, more like her age. He realizes her bruises are lesions - she has leprosy. The chemotherapy is killing some of the bacteria, but it will also wipe out her immune system. This type of leprosy makes her skin look younger, which is why she didn't look her age. The stress of the pregnancy caused the leprosy to be more active. The patient revealed her boss is hiring her back because her replacement couldn't handle it.

House tells Thirteen not to feel so bad about being wrong about lymphoma - at least she had a good theory and stuck to her convictions. He reminds her that dying changes everything, but almost dying doesn't.

House goes to apologize to Wilson and admits Amber is dead because of him. However, Wilson doesn't blame House for the death - he then admits that he's not leaving because of Amber. He's leaving because of House's manipulation and he's been enabling his behavior. He wishes House had been alone on the bus, and he learned from Amber he has to take care of himself. He didn't tell House before because he didn't want to hurt him, like he never wants to hurt him. He leaves saying they are no longer friends, and maybe they never were friends.