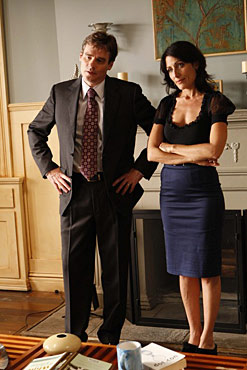 Epic Fail is a sixth season episode of House. House returns home to Princeton-Plainsboro where he continues to focus on his recovery by announcing he's going to quit. Soon he is tempted to start taking Vicodin again. He starts taking up a hobby, cooking, at the advice of Dr. Nolan, in order to keep himself busy. He tags along with Wilson to a cooking class.

Meanwhile, the team is unable to diagnose a loud-mouthed video game creator who posts each new symptom on the internet and opts for treatments suggested by the online community rather than by the doctors. Foreman angles for House’s job, but the pressure to solve the case creates tension in his relationship with Thirteen.

This episode marks the return of Lisa Cuddy, Eric Foreman, Allison Chase, Robert Chase, Thirteen and Chris Taub after they were all absent from the previous episode and only House and Wilson were seen. Andre Braugher returned as Dr. Nolan.

During a video game testing session, the head of the testing team stops responding. When his co-workers find him, he's complaining that his hands feel like they are on fire.

Thirteen meets the patient in the emergency room. She doesn't know what's wrong, so the patient asks about the famous diagnostician in the hospital.

However, House is in Cuddy's office with Eric Foreman. He wants to resign from the department and work on research to take the pressure off of him. He apologizes to Cuddy and Foreman for putting so much on them. Cuddy reluctantly agrees. When House leaves, Foreman pushes for his job. He points out that she must have kept the team on salary for a reason. She gives Foreman one shot.

Foreman meets with Thirteen and Chris Taub. They decide that it might be CPRS and Foreman orders a spinal stimulation. Thirteen and Taub go to see the patient, who thinks he has mercury poisioning from eating fish. He's also researching his case on the internet and asks for a blood test to rule out the diagnosis.

House goes to see Dr. Nolan. He's complaining that his leg pain is getting worse and that the ibuprofen he has been taking is barely affecting it. Dr. Nolan thinks he needs a hobby to keep his mind off of it.

Foreman comes to the patient telling him his mercury is elevated, but not enough for chelation therapy. The patient demands chelation anyway. Foreman refuses and threatens to drop the case. The patient agrees to the spinal stimulation.

Taub and Thirteen perform the test. The patient's chest starts to hurt, he has trouble breathing, his heart rate rises and his lungs fill with fluid.

The fluid shows that Vince has a thickened left ventricle. Although he didn't have CRPS, they were lucky enough that it showed another symptom. Foreman wants to ask the patient about drug use.

House goes along with Wilson to his cooking classes. House can't stop making jokes. When Wilson burns his meatballs on one side, House suggests using vinegar to slow down the process.

Foreman apologizes to the patient about the poor result from the spinal stimulation. The patient insults Foreman. The patient denies using drugs for the past 12 years, after his roommate suffered an overdose. Foreman orders an environmental scan of his office just to be sure. Thirteen tells Foreman to stop thinking like House and to be himself. He thanks her and asks her to dinner, but Thirteen is surprised that he's already made reservations.

Cuddy goes to visit House and finds her with Cecile. She speaks Mandarin with House so they can talk about Cuddy to keep her in the dark. Cuddy wants to know if House left his job because of her, but she denies it. When Cuddy hangs around, Cecile takes the opportunity, in English, to tell her to kiss him or leave.

Taub and Thirteen talk about having to work for Foreman. She's upset that Foreman told her to go to dinner rather than asking her. They relax by playing the videogame. Thirteen comes up with an idea.

They find that Vince studied birds to do the animation, and they ask him about psittacosis. However, the patient has developed a three hour erection so that rules out this diagnosis.

The patient needed a surgical shunt to relieve his erection. Foreman is upset Thirteen missed dinner. They discuss diagnoses and Foreman decides on thrombocytosis. Foreman and Thirteen discuss the missed dinner and wonder who is in the patient's room. Vince has called other doctors and posted his symptoms on the internet. Foreman tells them to leave because they don't have hospital privileges. One of the doctors stays around and thinks he needs an MRI for a brain tumor. Vince asks Thirteen who doesn't take side because she thought it was a tumor too. However, Vince figures out she agrees with the other doctors and insists on an MRI.

House has been up all night cooking and Wilson comes him and finds him. He keeps getting Wilson to taste. He then admits he couldn't sleep because of leg pain. However, House's cooking is excellent anyway.

Foreman and Thirteen argue about what she should have done when the patient asked for her opinion. Foreman does the MRI, it's clean, and he orders treatment for thrombocytosis.

Foreman talks to Chase about Thirteen. He suggests firing her.

Wilson finds House relaxing in front of the TV watching The Biggest Loser. He complains that his leg still hurts and he's afraid he will take drugs for it again.

House goes to see Dr. Nolan, who suggests trying something else. He thinks that he will eventually find something that will work.

Foreman brings Thirteen a donut as a peace offering. They apologize to each other. However, as they start making out, Foreman gets paged. The patient's lymph nodes are swollen, which rules out thrombocytosis. The patient has posted a reward for the cure.

House goes back home and finds his place empty. He finds an old bottle of Vicodin in a sneaker.

The steroids reduced his facial swelling, but the team is inundated with calls, faxes and e-mails from reward seekers. The team go through all the theories and eliminate them one by one. The patient wants to be tested for amyloidosis because that's what the majority wanted. Foreman agrees to the test if, once it's negative, he retracts the reward.

House realizes Wilson has come home early to check up on him. House has done the laundry and says he is fine.

The test for amyloidosis was positive and Taub starts him on the treatment. He comes in tells Foreman he's joining a plastic surgery practice. He started looking when he found out House wasn't coming back. Thirteen tells Foreman that they will get along fine without him. She tells him the case got solved, but he feels he might not be ready. She cheers him up by telling him about her and a cheerleader from Iowa.

Wilson has been surreptitiously testing House's urine, and finds House tried to substitute dog urine. He talks to Cuddy, tells her that House is not limping, and they think he's been using drugs.

Thirteen finds Vince in the hallway having hallucinations. Foreman manages to calm him down, but he starts hallucinating again. Foreman realizes he has a high fever and amyloidosis wouldn't cause that.

The anti-pyretics didn't work, and they put him in a cold bath to reduce his body temperature. They think it might be LCDD, which also causes protein to build up in his organs. The problem is there is no treatment and the only treatment is high dose chemotherapy, which is dangerous. The patient agrees to the treatment.

House denies using Vicodin. He offers up another urine sample for testing.

The next day, Foreman rushes in - he has a new diagnosis of Fabry disease. The patient's fingertips didn't swell up in the water. However, Thirteen is already on it - she's discontinued chemotherapy and started the proper treatment. He didn't have protein in his organs, but fat. It's a chronic but treatable condition. Foreman asks her how she did it, and she admits she went through the internet responses.

Cuddy appoints Foreman the new head of the diagnostics department. Thirteen comes to congratulate him. She realizes he's angry, but he admits he shouldn't be. He realizes Thirteen was just afraid to confront him openly. He is afraid it's going to affect her relationship. However, he doesn't want to break up with her and realizes he has to fire her.

House comes to Dr. Nolan and tells him he slipped, but not in the way he thought - it was House who posted Fabry disease - he shows the reward check to Dr. Nolan. However, it made his pain go away. He's afraid to go back because he might go back on drugs. However, Dr. Nolan realizes that he may have to go back. House agrees.

Fabry disease is very rare, with an occurance in the general population of about 1 in 120,000. That works out to about 250 cases in the entire United States. It is possible, but not likely, that House would see a case. Even specialists in genetic disease and neurology would be unlikely to see a case in their lifetime. However, its symptoms are very non-specific and many Fabry sufferers are not diagnosed until early adulthood even though the disease affects even young patients. Moreover, Fabry can be fatal if untreated and often kills without warning.

The title of this episode comes from the internet culture slang "epic fail", somewhat referencing the extensive featuring of internet/MMORPG culture in this episode.