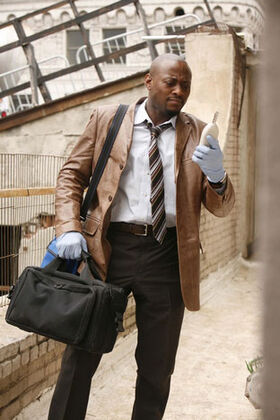 Euphoria (Part 1) is a 2nd season episode of House which first aired on May 2, 2006. A police officer whose behavior has changed gets sicker and sicker, when suddenly one of the team starts exhibiting the same symptoms.

Officer Joe Luria catches up to a a criminal identified only as "Babyshoes." However, after cornering him, the officer Luria starts acting very strangely; waving his gun around and laughing while attempting read Babyshoes his Miranda Rights. Babyshoes takes the opportunity to shoot Luria, but the bullet shatters on his bullet-proof vest, sending a shard into his skull, and earning him a trip to the ER. However, Luria keeps right on laughing.

As the doctors in the ER attempt to stop the bleeding, Luria's giddiness persists, causing House to take interest in the case. Foreman thinks it is drugs. The nature of the symptoms lead the team to consider carbon monoxide poisoning. Chase and Cameron are assigned to check the patient's blood gases and tend to the patient while House sets out to investigate Joe's police station. House sends Foreman to Luria's police car, personal car and apartment to see if he can find anything that would explain the symptoms.

Luria does test positive for carbon monoxide, so they give him oxygen and start a medical history. Luria starts losing motor function, another symptom that points to carbon monoxide poisoning.

Despite his assurances to the contrary, Luria's living conditions turn out to be a cesspool, with uneaten food, trash, dirty plumbing facilities, rust, and general disarray. Foreman checks for a gas leak, but finds nothing, until he notices a closed off shed on the roof. Inside is a hydroponic greenhouse Joe is using to grow large quantities of marijuana.

House's cursory investigation of the precinct reveals nothing, mainly because he is actually there trying to get several speeding tickets fixed on the pretext that he had a lot of emergencies. While Luria's partner deals with the tickets, House notices that Joe's desk is next to an air conditioner, and that the stagnant water in it hasn't been cleaned in some time.

Despite the illegal drugs found at Luria's apartment, House diagnoses Legionnaires' disease, the bacteria for which were growing in the cooled water in the AC unit. Foreman is skeptical, but House points out that Legionnaires' fits the symptoms better than marijuana use.

As Chase and Foreman check on the treatment, Luria starts feeling better. X-Rays confirm that Luria had Legionnaires', but that the treatment has cured it. Luria is worried that Foreman is going to tell someone about his marijuana. However, Foreman then realizes that Luria has gone blind even though he thinks he can still see.

Despite Luria's insistence that he's fine, the new symptom leads the team to believe there is damage to both occipital lobes of the brain. House thinks it must be a clot and orders a contrast MRI. However, an MRI is ruled out, due to the bullet fragments still lodged in Luria's head. House thinks an angiogram won't work because the skull will interfere with the imaging, but the team insists on doing one anyway.

Foreman shows hostility towards the patient based on the fact that he's a hypocrite for arresting people for the same drug he uses. Cameron thinks Foreman should be off the case because of this, but House disagrees because Foreman is the team's neurologist. The angiogram shows nothing they can use, just as House expected. House still wants to do an MRI, so he finds a suitable corpse, produces a .38 caliber pistol, and shoots the corpse in the head to Chase and Cameron's surprise, but seemingly to Foreman's amusement.

As the team goes to test the MRI on the corpse, House begins to suspect that Foreman's recent behavior may be a sign that he has caught the patient's disease. However, Foreman says he is fine. They test the corpse with bullet fragments in the MRI, despite Cuddy's objections, and immediately destroy the MRI machine, which now can't be used for two weeks.

The team is at a loss as how to proceed, so House tells the team to check the heart to see if they are throwing off clots. While Chase is testing him, Luria begins to bleed from his eyes, and Foreman breaks out into laughter, earning odd looks from Chase and Cameron. Foreman notes that either thinning or clotting his blood will kill the patient, and wonders out loud why he's the only one who thinks the situation is funny.

Both Luria and Foreman are put into an isolation room. Foreman still claims he isn't ill. House plans to use the portable MRI on Foreman and tells him to take his own temperature. Chase and Cameron find House taking his own blood for testing, and orders them both to do the same. House notices that Foreman's brain is softening, but can't find a reason. Cameron volunteers to go to Luria's apartment again, but House tells her to just check the samples Foreman brought back.

Chase goes in to draw Foreman's blood. He tells him about the lesion on his cortex, which controls emotions. Foreman asks more questions and thinks it might be a staph infection despite his lack of fever. He suggests antibiotics.

Cameron's tests show nothing, but House refuses permission to go back to Luria's department. They can't biopsy Luria's brain, but House suggests they can biopsy Foreman's brain instead. However, the team objects due to the risk of brain damage.

Luria regains consciousness and finds Foreman in the room with him. Luria has gone totally blind, and now realizes it. However, Luria's condition starts to worsens to include extreme pain, as the infection is spreading into the pain center of his brain. Morphine isn't helping. Luria asks Foreman if he believes in prayer; Foreman says "not really" and Luria says he doesn't either. He then asks if Foreman wants to try praying. Foreman agrees.

The brain biopsy doesn't show any sign of staph. House sends Cameron back to the lab, but once again refuses to let her go back to the apartment. He also orders Cameron to run some tests on Foreman. Wilson confronts House, noting that with Foreman, he's being more cautious than usual. House responds angrily to Wilson by saying that cancer doctors never catch their patient's illnesses.

Luria's pain is getting worse, and he is at the maximum dose of morphine. Foreman is angry that House won't let Cameron go to Luria's apartment. Enraged, he deliberately stabs Cameron with a needle to expose her to whatever he has, essentially to motivate her to go back to Luria's apartment.

Chase and House discuss possible diagnoses with Foreman. Meanwhile, Cameron has donned an isolation suit and returned to Luria's apartment. Foreman discovers that not even a direct shot of morphine into Luria's carotid artery will stop the pain. The infection has spread into the pain center of the brain. House orders Chase to induce a coma. House begins to figure out that Cameron's absence is due to the fact she's returned to Luria's apartment and goes to meet her there. House wonders why Cameron would risk her life for a guy who both stole an article and stabbed him with a needle. She says it was to save her own life, but House asks if that is the case why she bothered to wear an isolation suit. He wonders what Foreman would have to do to make her hate him. Cameron does get some other useful samples. House notices that there are three loaves of rye bread and sends Cameron back in because it's not consistent with Luria's habit of getting take-out to eat. The bread was used to feed pigeons, and Luria collected the droppings to fertilize his pot crop. It's a good chance that there is a parasite in the droppings, and Cameron takes a sample.

Foreman is hopeful - Luria's EEG has improved since he was in a coma. Chase tells Foreman that Cameron hasn't shown any symptoms of the disease.

Luria's fever goes down, and his white cell count starts to improve. However, he then has a heart attack. Cameron runs in to say that they didn't find the parasite they were looking for. Foreman tries to resuscitate Luria, but fails. Luria dies from multiple system failure. House tells Foreman to note the time of death.

This is the second time that both Hugh Laurie and Scott Michael Campbell have appeared on a show together. The two previously starred alongside each other in the 2004 movie, Flight of the Phoenix.