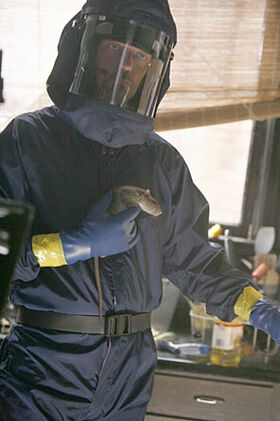 Euphoria Part 2 is a 2nd season episode of House which first aired on May 3rd, 2006. The rest of the team rushes to diagnose what is wrong with Foreman and realize that the disease is progressing faster in him than in the deceased patient.

House wants a bone saw to take a sample of the dead patient's brain, but Cuddy refuses on the grounds that if the dead patient is contagious, they could release something to the rest of the hospital. The CDC has been called in, but they won't be on the scene for three days. House points out that Foreman will be dead by then.

Instead, House asks Foreman to perform an ice pick biopsy on the dead patient - an old procedure that Foreman has only read about. However, when Foreman tries, he biopsies the mattress instead. House realizes that Foreman is blind and doesn't realize it - the same symptom that the dead patient had, only Foreman's symptoms have developed faster.

House rules out meningitis because they would all be sick. It can't be a toxic mold or Cameron would be sick too. House instructs the team to treat Foreman for everything. When the team points out that this could be toxic, he screams that the better idea would be to autopsy the dead patient, but he's not allowed to do so.

Foreman is given a range of medication, and can identify them by touch and realizes he is being treated for every possible diagnosis. Foreman takes the pills anyway. House goes back to the cop's apartment and calls Foreman on the phone to retrace his steps. He is exposing Steve McQueen to the same environment Foreman was in. Foreman calls his father to advise him of his condition.

Wilson finds House looking at a webcam of Steve McQueen in House's kitchen. Wilson is appalled that House is using their pet rat as a guinea pig, but House says he needs a healthy specimen. They wonder how they will know when Steve is showing symptoms of euphoria.

Cameron goes to treat Foreman, and she is not showing symptoms. Foreman has regained his sight. House tells Cameron to start withdrawing his meds one by one until they find out which one works. However, Chase comes in with bad news - the medication are already starting to affect Foreman's pancreas.

Foreman is nauseous from the medication. House tells Foreman he has no more than 14 hours to live, but only 4 if he keeps taking the meds. He agrees to go off the medication. At that moment, Foreman's father shows up. House rushes him away and takes Rodney Foreman to see Cuddy to see if he can convince her to do the autopsy on the dead patient. Cuddy falls back on public health protocols although she realizes Foreman may die. She says that doing the autopsy may put other people at risk of a contagious deadly infection. Surprisingly, Rodney agrees with Cuddy.

Rodney goes to see Eric. Eric is suffering from loss of motion control. Rodney asks if the disease is going to hurt. Eric lies that the other patient wasn't in much pain before he died.

Steve McQueen is not suffering symptoms either. The dead patient is in a locked room under guard to keep him away from House, who has been staking out the morgue to get an opportunity to do an autopsy.

Foreman's brother hasn't been told about the illness. Foreman would like to speak to his mother, but his father reminds him that his mother can't travel and that she wouldn't remember anyway - it would just make her upset for a few minutes because of her dementia. Rodney hopes that his son will go to heaven, but Foreman is not comforted by this fact. Foreman wonders what he should be afraid of if he isn't afraid of dying, and admits to his father that he no longer shares his faith. Rodney says he will pray for his son, and suggests Foreman do the same.

Chase reports that Foreman has gone blind again and that he is in severe pain. House thinks that the faster progression of the symptoms may point to the underlying cause. Finally, House realizes that the dead patient had Legionnaires' disease, and that this may have slowed the progress.

Cuddy goes to see Foreman. Foreman realizes that Cuddy couldn't change his mind because his father asks, but gets angry at her for making a decision that will kill him just to possibly avoid some jail time - he's not going to forgive her just because she came by to say she was sorry. At that moment, House comes along and exposes Foreman to Legionnaires' disease on the theory that it will slow the progression of whatever Foreman has. Foreman would prefer to be in an induced coma, but House exposes him anyway by shattering a glass vial of the disease in the isolation chamber.

Foreman starts suffering from Legionnaire's disease. He's being very curt to Cameron. However, his temperature is dropping. His pain isn't getting worse.

House asks Cameron what diseases affect humans but not rats. It's clear the disease isn't bloodborne, or Cameron would have it. He then asks what diseases he could have but test negative for. He points out that if the infection didn't get the immune system riled up, the immune response to Legionnaires' would kill the infection anyway. One infection that fits the bill would be listeria, and House starts treating Foreman for it. Foreman asks for a white matter brain biopsy, a deeper brain biopsy that has a very high risk of severe brain damage. However, House refuses to agree to it. Foreman doesn't want the listeria treatment because it will kill the Legionnaires' too and bring back the pain. House promises to do the biopsy if he has to and Foreman agrees to the listeria antibiotics.

House goes to see Rodney in the chapel. He tells him that Foreman will have to be put in a coma if he gets in too much pain and that Rodney will have to make some medical decisions for Eric. Rodney is aware how manipulative House is, but agrees to let House have a free hand because Foreman has also told him House is the best doctor he has ever worked with. Cameron goes to discuss putting Foreman into a coma, but he wants to appoint Cameron as his medical proxy because he's afraid that House will be able to manipulate his father. He apologizes for exposing Cameron. She agrees to be his proxy, but doesn't forgive him for exposing him and won't accept his apology until he gets better.

Foreman isn't improving, and Cameron suggests the deep brain biopsy, but House wants to wait. Chase goes to tell Rodney that Eric is being put in a coma and this will be his last chance to talk to him if he doesn't come out it. Rodney doesn't know what to do. Chase tells Rodney to tell Eric he loves him. Rodney goes to see Eric to tell him it's going to be alright and he doesn't want to miss him. Cameron tells Eric she accepts his apology. They put Eric into a coma.

Wilson comes in to tell House to do the biopsy. House thinks there is more time and the procedure is dangerous. However, Wilson says if it was some other patient, House would have done it already. Cameron comes in and demands the brain biopsy, waving her medical proxy. Cuddy backs Cameron and tells House that if he doesn't like it, he can get a lawyer. Cameron points out that they wouldn't have to do the biopsy if Cuddy would agree to the autopsy. House begs for an hour to go back to find a dead animal at the apartment. Cameron tells him he has until Foreman's oxygen saturation reaches 90. House heads off without an isolation suit, figuring either he or Cameron will come up with the right answer.

House finds a blind pigeon, but can't capture it. Meanwhile, Cameron prepares for the brain biopsy. However, House does notice a water leak. He finds an irrigation system working in the grow room that was only active when Foreman was there. House realizes that the water isn't coming from the regular water supply. He climbs on the roof and finds a cistern of rain water that contains Naegleria fowleri, a parasitic amoeba that feeds on brain cells and has resulted in primary amoebic meningoencephalitis. He calls Cameron with the news, but she already knows - she performed the brain biopsy.

They start treatment for the parasite. Cameron tells Rodney that although there will be no lasting damage from the parasite, the brain biopsy may have caused damage that they won't know about until Eric wakes from his coma.

Foreman comes out of his coma and is responsive to questions. He is not in pain, but doesn't feel numb. He is able to follow House's finger with his eyes and identify everyone at his bedside, including the "manipulative bastard". However, Foreman can't wiggle his toes on command, and his lobes appear to be crossed: when attempting to move his right arm, his left arm moves instead.