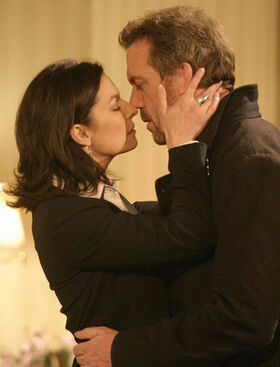 Failure to Communicate is a second season episode of House which first aired on January 10, 2006. A famous writer finds himself literally at a loss for word when he starts suffering from aphasia. Meanwhile, House and Stacy are stranded in Baltimore and they share a kiss.

A famous journalist collapses while giving a thank you speech to his co-workers. When he regains consciousness nothing he says make sense although he is using English words and the inflection of his sentences remains correct.

Cuddy asks Foreman who has the best diagnostic department nearby as House is not in town. When Cuddy says aphasia is one of the symptoms, Foreman asks for the case because the cause is most likely neurological.

Foreman examines the journalist. The patient thinks he is speaking correctly. The patient can't write. He can understand the doctors and put together an appropriate one word response. He did hit his head when he fell.

Meanwhile, Stacy and House are at an insurance company trying to justify some of House's medical billing. All of his cases were rated the maximum on the complexity scale. For example, House prescribed Viagra for a female patient's heart problem when she couldn't take Nitroglycerine because of her blood pressure.

The team starts arguing about who should have authority while House is away. Despite Foreman's attempt to take charge, they all agree to work together.

Meanwhile, Stacy and House finish up their insurance business and discuss what to do before they fly back. Stacy has deliberately booked a different flight.

The team starts treating the patient, but he starts coughing and his vital signs start failing. The patient has pulmonary edema.

House calls Wilson because Cuddy called him about the journalist. House is waiting at the airport for his flight. He doesn't think his team has it right.

The team is still discussing a possible diagnosis when House calls them. He tells them to get an MRI and a better medical history and that he will be back in a few hours. House taking over the case further undermines the rest of teams view of Foreman's authority.

The team start talking to the journalist's friends about his drug use, and the journalist is answering yes and no questions. A picture appears of a thrill-seeking journalist who settled down when he met his wife.

The MRI shows edema in his brain. There is scarring, but it doesn't affect the speech centres. The patient denies a prior injury or prior symptoms.

In the meantime, Stacy and House find themselves in the same waiting room at the airport. House buys Stacy a coffee, but they aren't speaking to each other.

The team still can't figure out a definitive diagnosis. They can't reach House on the phone and there are no more tests to try. Cuddy tries to pin the team down but they dodge her.

Meanwhile, House is entertaining Stacy by diagnosing all the people in the waiting room. Then he asks Stacy why she isn't wearing her omni-present cross. Stacy refuses to answer and they stop talking again.

The team checks out the journalist's home, but although they find anti-convulsive drugs, they don't explain the symptoms. Chase is challenging Foreman for his lack of confidence in his opinions, figuring that Foreman's former confidence was the result of having House to fall back on.

House is pressing Stacy about the cross and rejects Stacy's explanations about why she isn't wearing it.

Meanwhile, the patient is in pain. He finally communicates he has a metallic taste in his mouth.

Stacy finally admits that she had a fight with Mark and didn't want to go back to get her cross after she realized she forgot it. Not only that, the fight was about something totally trivial. Stacy is afraid that Mark is pushing her away.

Finally, Wilson gets through to Stacy who hands her phone to House. Wilson tells House about the new symptoms. House calls the team while Cuddy is there - Cuddy is furious that the patient is getting worse with three failing organ systems. House tells the team to tell the patient he is going to die so he won't hold back on any bad behavior. Instead, Cameron tells the patient that they are doing as much as they can. At that point, the patient breaks down and starts talking to Cameron, but the patient still isn't making any sense.

House and Stacy's flights are delayed, so they go to the airport hotel Stacy has booked well in advance just in case her flight was canceled. When they get to the room, House asks what's up. They start talking about their relationship. Stacy admits that she had had enough of him, but later realized how much she missed him. They kiss. When House pulls back, Stacy presses the matter. However, at that moment the phone rings for House. The team tells him that the lumbar puncture was inconclusive and that the patient's organs are still failing. Cameron tells House the patient's message: "He couldn't tackle the bear" and "they took my stain". House excuses himself, tells the team to keep the patient talking and write down everything he says.

The team start interrogating the patient. House passes the time by bounding a ball against a wall in the airport. Stacy comes down to meet him.

When House calls back, the team can't provide him with any more information. Cameron notes that the patient previously used the word "stain". They realize the patient won't talk when his wife is in the room. The team gets Cuddy to get her out of the room.

Meanwhile, House calls the patient directly while his wife is out of the room. House finally realizes the word "bear" is substituting for "polar" - the patient has bipolar disorder and kept it secret. That explained his risk-taking behavior as a journalist. When he met his wife, he decided he didn't want the ups and downs and underwent experimental surgery. During that surgery, which isn't performed in the United States, he must have contracted malaria, which would explain all his symptoms. He tells the team to actually look at the patient's blood through a microscope instead of running it through a machine. The team does so and instantly sees the malaria parasites.

However, the wife came back while House was explaining his diagnosis and leaves because the journalist has been lying to her. His friend tells him that she will come back when she misses him.

Finally, Stacy and House head for their flight home, and they discuss how difficult it is for people to change.