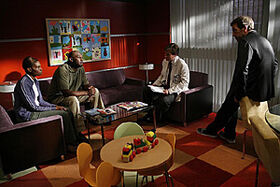 Family is a third-season episode which first aired May 1, 2007 in the United States. A bone marrow transplant to a critically ill patient is threatened when the donor, his younger brother becomes ill as well.

A young man is getting ready to donate bone marrow to his older brother with leukemia when all of a sudden he sneezes in front of Wilson.

House is trying to adjust to his new dog Hector, who has a habit of chewing things, including his cane.

Foreman and Chase do the environmental scan. Foreman is still feeling bad about the patient who died in House Training. They find an old water pump that they feel could be the source of an infection and Chase takes a sample.

Back at the hospital, they chill the younger brother to make him sicker. The patient tells Foreman and Chase that he hasn't tasted water from the pump in months. The patient tells them his testicles have swollen. House is enthusiastic, because it narrows down the diagnosis. Foreman plans to look for another marrow donor in case they can't figure it out.

Cameron and Chase check for infections that cause swollen testicles. Chase once again tells Cameron how he feels about her, something he plans to do every Tuesday. Chase thinks that the problem may not be an infection despite his fever. There are signs of a cardiac injury in the patient's tests and he feels the swolen testicles may be the result of the heart problem.

Chase and Cameron examine the patient's heart. They discover a growth on the mitral valve, which will take at least a month to heal. It is a direct result of making the patient sicker.

House suggests replacing the infected valve and treating the patient's marrow with antibiotics. Foreman argues with Cuddy that the procedure would be too dangerous to the younger brother. Cuddy tells them to go to the parents to tell them the risks. House confides in Cuddy that Foreman has lost his edge, and that he will fire him if he doesn't shape up in the next four days (the same deadline as the marrow transplant).

However, a biopsy of the growth indicates the growth is fibrous, not an infection. The heart valve replacement won't help. Meanwhile, Hector has eaten all of House's drugs and gotten stoned.

House vents about Hector to Wilson. Wilson suspects House left the drugs out for Hector to find. Hector has chewed through his cane and an rare old 78. The team tells House the patient doesn't have an autoimmune disease.

Meanwhile, Foreman has found a 67% match bone marrow donor. Wilson and House try to talk the family out of it because of the risk of complications, but the family wants to proceed with the partial match. House is angry that Wilson backed down in face of a bad decision by the parents. Foreman may have been wrong, but he was doing what he thought was right. Wilson backed down even though he was right.

House once again tries to get rid of Hector by "accidentally" leaving his door open. When he returns home, his stereo is gone, but the dog is still there.

The younger brother is upset he can't visit his older brother because of his infection. While Cameron is treating him, the patient starts bleeding out of his ears.

House drags Wilson along to pay for a new cane and apologizes for calling him a coward. House hears about the bleeding and figures the patient's bone marrow has shut down, just like his brother. Now the younger brother will die if they can't figure out what is wrong. They have to stop his medication until his marrow rebounds. House buys a cane with a flame stripe.

Foreman wants to run more tests on the younger brother, but House believes its futile because of the range of possible diagnoses - it will take months to run through the possibilities. Foreman leaves to start the tests anyway. House goes to tell the older brother he is dying. He tells him he can save his brother by risking his own life.

While they run tests, Wilson and Foreman discuss the water pump and Foreman's future at the hospital. Wilson wonders why they have one where they live, which is a suburb with municipal water.

The older brother wants to go through with being infected to save his brother, and the parents finally agree.

However, Foreman determines the answer - histoplasmosis, a fungal disease, most likely from chicken feces dug up from the farmland his house was built on. The younger brother can be treated, but his marrow still won't be any good for his older brother because the infection has attacked it.

While they treat the younger brother, Foreman asks if he wants to risk his life for the older brother. The younger brother agrees. Foreman starts drawing out the bone marrow without using an anasthetic because the patient would not be able to tolerate it, placing the younger brother in incredible pain. The transplant is successful and both sons live.

Later, Foreman talks to House. House tells him he did good. Foreman is glad he saved both patients, but is upset that he feels that to be as good a doctor as House, he has to have more of House's personality. House comes up with the opinion that Foreman has always had House's personality. However, Foreman has no intention of being under House's influence any longer, and gives two weeks notice of his resignation.

House mentions that finding the diagnosis is like finding a 'needle in a haystack', a reference to an earlier Series 3 episode, Needle in a Haystack.