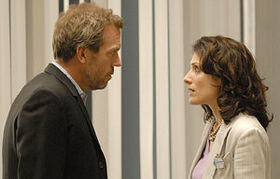 "Fetal Position" is a third-season House episode first aired in the United States on April 3, 2007. When it appears the only way to save a pregnant woman is to terminate her pregnancy, Cuddy appears to lose all objectivity in dealing with the case.

A pregnant fortyish photographer shows up for a photo shoot and soon recognizes she is suffering the symptoms of a stroke. She collapses right after telling everyone to call 911.

The woman is taken to Princeton-Plainsboro, where she recovers and is met by House. He tells her that although her symptoms have disappeared, it might happen again unless he can figure out the underlying cause. She tells House she was artificially inseminated. House looks at the blood in her urine and tells her that her kidneys are failing.

House finds the team looking at a photo of him taken by the photographer. He takes down the photo and starts the differential. Cameron thinks that the kidney problems started before the stroke, but House thinks it is unlikely. He thinks it more likely to be a heart problem brought about by a strep infection.

Cameron and Chase are discussing what to do now that House knows about their relationship. They find a problem with the patient's heart and start a procedure to treat her. The procedure goes well.

Meanwhile, House is arranging a vacation flight. The team comes in to say the treatment of the patient's mitral valve hasn't helped her kidney. They come up with five possible diagnoses and House tells them to narrow it down to one. However, none of the diagnoses turn out to be correct. House comes up with the only possible conclusion - the patient is healthy but her unborn child is ill.

The patient has maternal mirror syndrome. A fetus in distress can often kill the mother, but treating the fetus will cure the mother. However, it's incredibly difficult to diagnose the problem. House suggests paralyzing the fetus to take an MRI.

Cuddy hears about the procedure and objects, but House convinces her it's the only way to save the fetus. Cuddy and House both convince the patient it's the only way to proceed. The patient consents and House starts the procedure. Unfortunately, the problem isn't with the heart but the bladder. After Cameron informs Cuddy, she suggests surgery to correct the problem. Then she warns Cameron against having a relationship with Chase.

Cameron confronts House in the hyperbaric chamber about telling Cuddy about her and Chase.

Cuddy goes to the patient to tell her about the procedure. The procedure has risks and the patient is afraid of losing the baby because she is 42 and has already had two miscarriages.

House challenges Cuddy's conclusions and tells her she will have to do several bladder taps on the fetus before she finds out if the procedure will work. He tells Cuddy she's not being objective because the patient, like Cuddy, wants to have a baby. She tells House he can't go on vacation until he's done treating the patient.

Chase goes to the patient to explain the procedure. The patient knows about his feelings for Cameron.

They proceed with the shunt, which appears to relieve the pressure on the fetus's bladder. Cameron and Chase once again discuss their relationship. However, they realize the patient is jaundiced, meaning her liver is shutting down. House realizes the blocked urinary tract may not have been the only problem. House has to recommend to the patient that she terminate the pregnancy. However, the patient wants to wait until the fetus is viable, but House tells her she won't live more than two days. She still insists on not terminating the pregnancy. House tells her that this isn't the choice - either the fetus dies or they both die. She still won't agree to the termination.

House goes to Cuddy to convince her to terminate the pregnancy. However, she is not sympathetic and backs the patient's position. She starts her own differential with House's team, but they agree it's mirror syndrome. Cuddy gets desperate and suggests the liver problem is unrelated to the mirror syndrome. The team gives some possible diagnoses, but House shoots them down. Cuddy suggests a liver biopsy, but the patient is so weak that the only way to do it is to go down from her jugular vein. When House shows contempt, she tells him to go on vacation.

The team start the biopsy. Foreman and Chase talk about Chase's relationship with Cameron. During the procedure, the patient goes into premature labor, but the team stops it. The biopsy is negative. The team comes back unanimous that it's mirror syndrome and suggest termination. Cuddy insists on trying to treat the patient, but team supports House. Cuddy goes to do the procedure herself. The team realizes she is out of control, but their usual course of action when House is out of control, telling Cuddy, won't work. They turn to Wilson, who also tells Cuddy to terminate when she nearly kills the patient by giving her steroids. She throws him out of the room.

Cuddy goes to Wilson to apologize. The patient is getting worse. Wilson reminds Cuddy that House would terminate the pregnancy and be objective about the patient's life. However, Cuddy wants to put her back on steroids because the patient is already on a respirator. Cuddy goes to House for help. He tells her she's not being objective, but she's not an idiot. They take a look at a new scan of the fetus's lungs. House comes back to do a new differential. Chase suggests doing exploratory surgery, and House surprisingly agrees. He and Cuddy go to the patient to get consent, but Cuddy tells her that the procedure is incredibly dangerous to her. However, it's the only remaining option. The patient agrees to the procedure.

The surgery proceeds to a standing room only crowd in the operating theater. The fetus reaches out and grabs House's finger causing him to take an uncharacteristic pause for a more than a few seconds and enter deep thought. He jokes that he forgot to TiVO "Alien" in order to recover from his pause. The surgeon finds lesions that he can correct, but the mother goes into fibrillation. House says the only way to save the mother is to take out the fetus, but Cuddy insists on shocking the heart . The patient's heart starts beating again, and Cuddy tells the surgeon to complete the surgery.

The patient and fetus recover. House starts calling the fetus a baby. The patient thanks House, but he reminds her he wanted to kill the fetus.

Cuddy catches House as he's leaving and gives him a first class ticket to Vancouver Island. She boasts she saved two lives, but House reminds her that she wasn't being objective, and 99 times out of 100, both mother and fetus would have died. She tells him to go on vacation and be happy.

House goes home and tears up the plane ticket. However, he takes his phone off the hook and sits down to watch travel videos on the Galapagos Islands.

Months later, we see the patient hanging up photos of the hospital staff in her apartment and taking care of her new baby boy.

Face - She asks if her smile is crooked, as often the first symptom is often loss of muscle control on the left side of the face.

Arms - She holds her arms out straight in front of her, but cannot maintain them at the same level.

Speech - She realizes her speech is slurring.

Time - She realizes that she will recover if she is treated right away and tells the people around her to call 911.