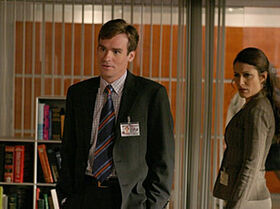 Ed: "I can't help it. Part of me, a big part of me, can't handle that.... doesn't want her to get better. Does that make me a terrible person?"
Cameron: "Yes"
―Fidelity

Fidelity is a first season episode of House which first aired on December 28, 2004. The cause of a woman’s hypersomnia turns out to be obvious, but with no way to explain how she could get ill, the only way the patient’s husband can save her is by admitting he can’t trust her.

After coming home from jogging with a friend, a man tries to coax his wife out of bed, where she has been for the past three days. She strikes her husband when he attempts to rouse her, then says she needs a doctor.

Elise sees six doctors before Cameron brings the case to House. He guesses clinical depression, but that has already been ruled out. He finally agrees to take the case. She presents with a fever , irritability, and is sleeping 18 hours a day (hypersomnia). The team does a differential. House orders them to redo the blood tests and do an MRI.

The team tells the patient and her husband they suspect a tumor. They do the MRI to look for it. However, they find no lesions or masses. The husband is upset that they are taking too long to come up with a diagnosis. Suddenly, the patient has a seizure and starts vomiting.

They review the MRI results, and no-one can see anything wrong. Wilson thinks it might be paraneoplastic syndrome from breast cancer, which can affect the brain. They do a mammogram. The patient tells the doctors her mother died of breast cancer at the same age. However, they still can't find a tumor, so Wilson wants to do a PET scan. They also suggest they check the patient's work place, since if it were something in the house the husband would be sick, too.

Foreman goes to the patient's workplace, a restaurant. She works roasting meat. He talks with the staff about what products they use. They only use all-natural products and the rest of the restaurant staff is healthy.

After complaining about an itch, the patient starts hallucinating that bugs are bursting out of her body. The team starts another differential. House thinks it is African trypanosomiasis, or sleeping sickness, but they can't understand how she got it and the treatment could kill her if they're wrong. Foreman thinks it is a disease that can be caught from rabbits, tularemia, which she has been exposed to at work.

The team starts discussing the sleeping sickness and tularaemia diagnoses. Foreman wonders why House is so tough on him, but not the others. The others tell him it's because House thinks more highly of him.

House quizzes Wilson about who he's seeing on the side. Wilson admits he had lunch with one of his nurses, but denies having an affair.

House figures that the patient might have gotten sleeping sickness through sex. House tells his team to find out if either partner has been unfaithful. The team starts questioning them. Both deny being unfaithful. Without an admission, House can't think of any other way she might have been exposed to sleeping sickness and orders treatment for tularemia.

All of a sudden, the patient starts to exhibit short term memory loss, repeatedly asking what time it is, then becomes unresponsive and lapses into a coma. The coma rules out tularemia, but sleeping sickness would still be on the board if they could figure out how she was exposed.

House talks to the husband and asks him to consent to the drug for sleeping sickness on the supposition that she's been unfaithful. He warns the drug alone could kill her. However, he also tells him that if she does have sleeping sickness, she will be dead within a day. When the husband says he doesn't know if he is sure his wife has been faithful, House orders the treatment.

Foreman and Chase go over the precautions and numerous side effects of the treatment drug. The patient doesn't improve, but doesn't get worse. The husband talks to Cameron about his feelings now that he believes his wife may have cheated and asks her if it makes him a bad person for hoping she doesn't wake up. Cameron tells him it does.

Wilson again denies having an affair and tells House that he loves his wife. House points out that he loved his first two wives, too, yet he cheated on both of them.

House finds Cameron in the lab, and finds out she has been crying. Cameron admits she told the husband he was a jerk for wanting his wife to die. She tells House that she was married for six months to a man she loved who died of thyroid cancer that metastasized to his brain. House knows that isn't the whole story - Cameron must have known he was terminally ill when she married him.

The patient takes a turn for the worse - her heart is being damaged by the medication. House tells the husband the drug isn't working. The husband breaks down and asks her not to die, at which point, she begins to come out of her coma and is finally out of danger.

After the husband storms out of the room, Cameron confronts the husband about his feelings, and reminds him that his wife loves him. House asks the patient who she had the affair with so that he can be treated. She realizes her husband isn't coming back. Cameron goes to find the person who gave her sleeping sickness, and finds the [[Adam (Fidelity}husband's jogging partner]].

The patient has shortness of breath and tightness in her chest, although she has no history of heart disease in her family and no stress. House thinks it might be anemia and the patient takes off her blouse for an EKG, and House sees her huge breasts. She's says she had her breasts enlarged for her husband. House calls in Wilson. They discuss why she had them enlarged: House believes she did it for herself. They also discuss why Wilson is wearing a new tie: House thinks he has a girlfriend. House orders blood tests on the patient. Cuddy suspects House is just keeping the patient there to ogle her breasts. However, House orders an EKG, blood tests and a tox screen.

Cuddy comes back the next day with the blood test results, which are normal, but the EKG shows her heart rate is down. Her husband has recently been diagnosed with high blood pressure. House figures that her husband has been spiking her breakfast with his beta blockers to try to tone down her sex drive to match his, which has been suppressed by the same medication.

Sleeping sickness is almost unknown in the United States, and for a person with no history of travel to where it is endemic is practically impossible.