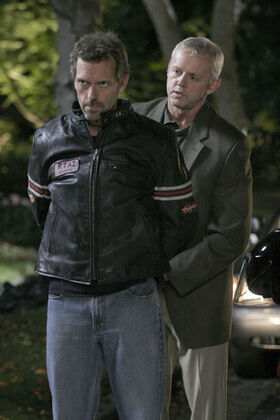 Fools for Love is a third season episode of House which first aired on October 31, 2006.

During an aborted robbery attempt at a diner, a young woman who had been threatened with rape but had been saved by her husband all of a sudden cannot breathe.

The team starts to discuss the case, but House is distracted by Wilson talking to a new nurse. House goes to break them up by telling her about Wilson cutting through his cane. The nurse already knows House by reputation. When the nurse goes on her way, House reminds Wilson about his three failed marriages. Wilson denies that he is having a relationship with her, but House thinks he's lying.

Meanwhile, Cameron still wants to talk about the patient's anaphylaxis and pain. She didn't get it from the robber, who is healthy if injured from his encounter with the husband. House thinks it might be salmonella and orders treatment.

The patient denies smoking a lot of marijuana (which is where Foreman suspects the salmonella comes from), but agrees to the antibiotics. However, the patient develops a rash. This leads House to believe it might be stress related anaphylaxis. He bets Foreman $100 that she will have a reaction during a stress test.

Foreman performs the test, and while the patient is on the treadmill, her husband starts having the same pain symptoms in his chest and stomach.

House tells Foreman he won the bet, even though the wrong person had the reaction. Foreman finally pays up. They start going through a new differential while House breaks into the nurse's locker. Foreman tells House Wilson isn't dating her, but House finds jazz tickets but no jazz CDs, which leads him to believe that she's trying to please Wilson. They bet $200 that House is right. House tells his team to test for anything they could have gotten from the same source.

Chase and Foreman go to the patients' home. Chase finds condoms, leading him to believe that the husband is cheating. House is convinced that one of them is cheating even though Foreman thinks they love each other. However, Chase points out an STD would explain their symptoms. House goes to confront the patients, but the wife says they were just being extra-cautious. The husband, who is white while his wife is black, thinks Foreman is racist. House orders Foreman to take the wife off antibiotics to see if she develops a fever.

The wife starts hallucinating that she sees her husband's dead father, then goes into a coma. The coma gets progressively worse. The husband tells Foreman that his father broke his arm and threatened his wife when they were 13 and living next door to each other and started getting friendly.

House goes to Wilson for a second opinion, but he is really there to show Wilson the nurse's personnel file. Wilson still denies he's dating her and accuses House of hoping he will have bad relationships so he will have more time for him. Wilson doesn't think it's sarcoidosis. Despite this, House wants to do a brain stem biopsy. However, Cameron won't let House let the husband give consent because he's in a conflict of interest and the risks are too high. Cuddy agrees with Cameron, but agrees to let Wilson talk to the husband if House apologizes to the clinic patient.

Wilson talks to the husband. He's reluctant because his wife is so smart, but proposes they stop treating him so they can biopsy him instead. House is furious with Wilson for letting that happen. House orders the husband's morphine cut off, but his team won't do it, so House fakes out his team and injects the husband with an opiate blocker to put him in pain. Foreman tries to help, but House has locked the medicine cabinet. Foreman manages to give the patient a tranquilizer. The husband says he would die for his wife.

The husband gets worse, but the problem hasn't spread to his brain so they still can't do a biopsy. The wife is getting worse and the husband is vomitting blood. Cameron thinks it is something non-contagious and non-environmental. Foreman thinks they have different diseases. They think the husband's bowel is dead, but tests show it to be fine.

House wonders why the father beat up his son. Foreman thinks he was racist, but House starts asking the team about genetic diseases. He thinks its hereditary angioedema, but it's incredibly rare and the fact that they both have it would mean that they share a parent - the seemingly abusive father. Since they don't have time to test, House tells them to start treating them for it. The wife improves, showing House was right.

Foreman doesn't want to tell the patients right away, but House says it is inevitable that they will find out and the risk to any children is too high. Foreman gives them the pills to treat it and lets them know that it is genetic and that there is no reason two unrelated people to have it. The wife figures out that the reason that people say that she and her husband have the same eyes and she is lighter than both of her parents is that they have the same father. The wife becomes angry, the husband resigned. Foreman tries to tell them they still feel for each other, but the wife can't be consoled and eventually gets her own room.

As Foreman goes to leave, he meets up with the nurse that House thought Wilson was dating and collects his $200 from House. Foreman asks his date if she really likes jazz and she admits she doesn't. She just wants to spend time with Foreman. However, as they leave, Foreman tells his date he will meet her in a little while as he goes to console the husband over his wife's decision to get her own room.

House treats a 50-ish male who is complaining of a rash on his groin. House diagnoses him with dry skin from his nicotine gum and refuses to test him for STIs. When House tries to leave, the patient trips him. House takes a swab for testing, then asks to take the patient's temperature rectally. House inserts the thermometer, then leaves the room, throws away the sample and leaves the clinic.

Cuddy tells House to apologize to the patient - the patient has threatened to kill him and Cuddy points out that what House did was assault.

The patient tells House he doesn't want to sue him, but does want to beat him up. He calls House a bully and says he will accept an apology. House tells the patient to tell his friends he scared the doctor and he will tell Cuddy he apologized, but both of them will be lying.

As House is riding home on his motorcycle, he is pulled over by a police car. Out steps the patient, who has ostensibly stopped House for speeding. House doesn't have his vehicle documents on him. The patient tells House that he noticed that House was taking pills during the examination, and makes an excuse to search him. The patient finds House's Vicodin and arrests him for possession of a narcotic.