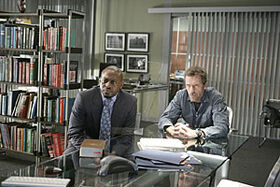 Frozen is a fourth season episode of House which first aired on February 3, 2008 - a special episode following Super Bowl XLII.

A doctor stationed at an Antarctic research station saves a man from bleeding to death from a wound to his femoral artery, but then collapses, clutching her chest.

Cuddy comes to House, who is trying to fix the cable on one of the coma patient's TVs. She tells House that cable is no longer free to patients. She then tells House about the patient trapped at the South Pole.

House discusses the case with his team. They can't evacuate the patient for two months. They start thinking it might be a kidney stone, but she doesn't have the right medical equipment to treat it. However, Kutner surmises they may have equipment for sound-blasting other stones that might work.

House finds out Cameron is on the budget committee and asks her to reinstate free cable. She refuses. He starts destroying other things out of spite, starting with tongue depressors.

They get ready to test the rock breaking equipment on an egg. House is dismayed he can get free internet webcams from Antarctica, but not cable. The patient introduces herself to House, and House sends his team to find a way to blackmail Cameron into reinstating free cable. The rock breaking equipment breaks the egg, but then shatters the glass container. The patient, a psychiatrist, doesn't think it is a kidney stone. Foreman suggests a kidney function test. House suggests antibiotics in the meantime.

The team tells Cameron they are spying on her and give her a chance to reverse the cable policy. Otherwise, they plan to make her life miserable. She says tolerating House's whims is not her problem any more. When Cameron walks off, Taub suggests paying for it themselves, but Cameron has another idea.

The test shows decreased kidney function, showing House was right about the stone, but she still wants to wait. House realizes that she hasn't given herself antibiotics - she's given them to the injured man. Suddenly, she has trouble breathing. They look at her neck and realize that her lung is collapsing. They instruct her to use a syringe to reinflate the lung. She succeeds, but points out that this means it can't be a kidney stone.

Her kidney function test shows it is still declining. Foreman is wondering why House is letting her sit in on the differential. Foreman turns off the sound and suggests cancer. House breaks the news she may have an abdominal tumor, but there is no way to diagnose it. House tells her to X-ray herself as its the only thing she has. She agrees.

House tells Wilson about the patient's decision to give the antibiotics to someone else. Wilson thinks it shows she has character. They find nodes on her scanned X-rays that could be a tumor, but she would still need a biopsy and a stain. House suggests finding a node close to the surface that she can biopsy herself. House is wondering why Wilson seems happy and is wearing a nice shirt. He gives Wilson orders to look for a staining compound she might have at the research station.

House goes to his apartment and starts a long-distance physical of the patient. She's reluctant to take off her clothes in front of him. The patient wonders whether House has insomnia - he admits to drinking bourbon to fall asleep. She also notes the lack of family pictures. He tells her she's avoiding people, but she says he's just the same.

Wilson and Foreman are doing stain tests and are talking about whether House likes the patient. Foreman points out that he insults her all the time - Wilson points out that's courtship to House.

The patient takes time to strip off her layers. House wonders why she hasn't taken off her socks. She reminds him it's cold, and there are no lymph nodes in the feet. He orders her to start palpitating her skin. House starts playing sexy music. As she feels her back, he notes that one lymph node is swollen, giving them a possible biopsy site.

The patient takes a local anesthetic, and Wilson instructs her about how to perform a biopsy. Wilson notes that House has just referred to the patient by name instead of by a nickname. The patient manages the biopsy and House asks if she's okay. Wilson wonders why House is so concerned about her - he's never concerned about patients. Wilson realizes House is following him. House realizes Wilson is going to lunch and is most likely going to see someone. Wilson seems about to tell House something when he runs away.

Cameron confronts House about his team bothering her. She retaliates by resigning from the budget committee, meaning it's not her decision about cable any more.

House meets with his team. He has a plan to torture Cameron to get her to get back on the committee. He suggests getting Cameron to screw up and then fix it so they can blackmail her.

They find red wine will stain the cells. The patient admits that she has been checking up on Wilson. She wonders why someone so nice is House's best friend. She figures he's not as nice as he seems. Wilson realizes why House likes her. Wilson comes to the conclusion from the biopsy that she doesn't have cancer. However, all of a sudden, the patient is in terrible pain.

The patient's kidneys are still failing. House thinks it is an autoimmune disease and suggests prednisone. However, she thinks House is just guessing and demands proof. Foreman suggests sending her outside for five minutes - if she feels better it means it is autoimmune. Wilson finds out that House has been going through his wallet looking for receipts. Wilson has been at a fancy restaurant. House realizes back before the current test, they tested autoimmune diseases by damaging blood cells and seeing if the immune system reacted to it. She runs the test on her blood, which will take two hours. They discuss why he's spent more time with her than any other patient.

Cuddy finds House in the cafeteria and tells him that Cameron has been fired for screwing up the medication on a patient. House doesn't react and says Cameron has no-one to blame but herself. House tells Foreman that he thinks that Cuddy was lying as part of a conspiracy with his team to punish him for seeking free cable.

The blood test is negative. Foreman again suggests her going outside to see if her kidney pain diminishes. House thinks it is a bad idea and tells her to take prednisone. However, before she can go outside, she collapses.

They manage to get the station mechanic, the injured man, to stabilize her. She's now in a coma. House still wants to know who Wilson is dating and is sure that it's someone he already knows. They need a kidney function test, but they can't figure out how to tell someone to do it. However, they come up with an alternative - have the mechanic extract the urine through a catheter, then drink it. The mechanic agrees without hesitation, and House realizes the mechanic is in love with the patient. He tells him he can get him to do anything he wants to save her.

House confronts his team about getting Cameron fired. He tells them they can only say one thing to keep them from being fired. After they tell him that Cameron isn't really fired, Thirteen says she doesn't want to play games any more. House tells them that was the right answer and that he needs them to stand up to him. He then tells them they really have to pay for his cable.

The patient's urine is watery, which means either increased intracranial pressure or a problem with the hypothalamus. They tell the mechanic that he has to drill into her skull to try to relieve the pressure. If that works, they still might be able to figure out what is wrong. If it's the hypothalamus, there is nothing they can do. House convinces the mechanic to drill into her head. He's surprised how easy it was to convince him.

The mechanic prepares for the procedure and starts drilling. He penetrates the skin, but has problem with the skull. Foreman tells him that the skull is harder than wood, and to drill a quarter of an inch. He makes it through and they tell him to let the fluid drain. The patient regains consciousness and asks what's going on.

House gets his team to do a new differential. Taub thinks it might be clots. However, all the causes are ruled out. However, Kutner thinks it is fat blocking her arteries. When House overrules him, Kutner stands up to him and says it might be an embolism. House says that can only be caused by a broken bone. He then realizes something.

House tells the patient to remove her socks. She finds her big toe is broken. The marrow has been leaking into her bloodstream and causing the fat embolisms. She didn't feel it because of the cold. The mechanic sets the bone. All she need now is a bone splint. The patient thanks House, but he tells her to thank the mechanic for saving her life. The patient and mechanic embrace. House walks out of the room dejected.

Wilson is at a fancy restaurant when he is cornered by House. House has called his ex-wives to rule them out as romantic relationships. He notes that none of them hate Wilson although they all should. Wilson reminds that House solved the case because he liked the patient. House notes that letting the patient keep her socks on during the initial exam is what delayed the diagnosis. At that moment, to House's astonishment, Amber shows up and embraces Wilson.

Embolisms as a result of broken bones are fairly common. In fact, there was a similar case in the episode Love Hurts where it was dead tissue from a broken jaw rather than fat that was leading to arterial blockage. However, broken bones usually present with severe pain which wasn't present in this case due to the patient's exposure to extreme cold.

This episode was inspired by the story of Dr. Jerri Nielsen, a physician who diagnosed herself with breast cancer while on duty at the south pole in 1999. She confirmed the diagnosis by performing a biopsy on herself and using equipment dropped from the air. She treated herself with chemotherapy drugs that were also airlifted. She was finally rescued four months after the diagnosis. However, the cancer eventually returned and she died on June 23 2009, aged 57.

There is also the story about the Russian physician Leonid Rogozov, a member of Soviet south pole exploratory group in 1960s who diagnosed himself with appendicitis and performed the operation (appendectomy) on himself.