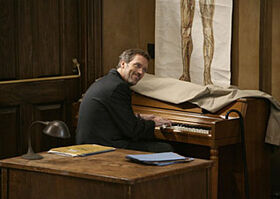 Games is a fourth season episode of House which first aired on November 27, 2007.

Some punk musicians are hanging around outside a gig when they get into an argument about one of their instruments. They break it up to go on stage. However, one of them starts coughing up blood and then collapses.

House is watching soap operas when Cuddy comes in. She is bugging him about which fellows he is going to keep. She demands that he decide or the pay overruns will come out of House's salary and his parking space will be moved.

Realizing that Cuddy's not messing around, House goes to Cameron for the sickest patient she has. They come across the punk rocker, but Cameron thinks it is just drug and alcohol abuse. House takes him on as a patient and presents him to the applicants. However, even Foreman thinks it's drugs and booze. However, the applicants pick up when House tells them this is the final test, the one that will decide the lucky three will be picked for his team and the last person who will get the axe. House orders tests, but Foreman quickly overrules him because he believes the tests will be invasive and dangerous. House agrees to one test at a time, and starts rating the applicants on a point system. Kutner falls behind early.

Foreman challenges House about making the diagnosis a game. House tells Foreman he doesn't need him. House asks Wilson about Amber, but Wilson is worried about a diagnosis he screwed up - a biopsy was a false positive. House doesn't care.

Thirteen asks Amber why she left the patient alone with an oxygen tank. All of a sudden, there is an explosion - the patient was smoking near the tank.

Amber drops into last place with 17/100. They are hiding from Foreman. Amber and 13 soon begin arguing about who gets to do the next test. House orders a nicotine patch and allows Amber to do a biopsy.

Chase and Foreman meet - Foreman notes that House is hiding from him. Foreman is following Taub in an attempt to stop the game. Chase notices Foreman has stopped wearing a lab coat. Taub and Amber are struggling with the patient when Foreman comes in and finds that the reason is the patient has put all of his nicotine patches on his arm and doesn't want them to know. Taub notices that the patient has blood clots. Amber realizes her diagnosis was wrong.

If a clot reaches a vital organ, the patient will die. House has waylaid Taub to keep Foreman away. 13 thinks it is malaria. Amber thinks it is drugs. House passes the testing to 13. House asks Amber to come into his office. While they're both in there, he asks her what she has against drug addicts. He also wonders if she is afraid to lose. She says that winners are happy. House notices the patient is happy, and this screws up Amber's world view. Amber gets tired of being psychoanalyzed and says all she wants to do is get the right answer and that will benefit the patient.

13 and Taub argue about whether Taub should care about the patient. He won't say why he wants the job. They find the patient is missing.

Wilson finds House in his office listening to the patient's music. House wants to know why Wilson has a release and a checkbook - he thinks that Wilson is going to pay the patient's lost money even though Wilson did nothing remotely incorrect. Taub and 13 come in and admit they lost the patient. House talks to 13 about why she likes drug addicts. She says he's worth saving. After discussing it some more, 13 leaves.

Taub asks 13 why she wants the job since she likes patients and House could care less. They find the patient in the children's ward entertaining the kids. However, he soon collapses. 13 checks his vital signs, which are still strong.

Cuddy finds House playing the piano and tells him to control his patient. House asks Cuddy if she has a preference for fellows. He admits that she makes good personnel decisions despite her shortcomings. She thinks Taub will stand up to House, and Kutner shares House's medical philosophy and would make a good match. Kutner and 13 come in and say the patient was negative for malaria. House goes to see the patient. He finds the patient's band mates. He sees one with a needle mark and finds a hypodermic. He realizes they have been sharing needles. He orders all the tests redone. The patient collapses again, but House realizes it isn't from drugs.

House realizes the clots were drug related, but the the coughing up blood and respiratory arrest wasn't. Foreman finally catches up with him. The lumbar puncture was clear - 13 secretly did one as she thought it was bacterial meningitis. Kutner thinks it is an embolism. House gives Kutner the right to run tests, but Amber points out that Kutner knows it can't be an embolism, and only wants the chance to run different tests and come up with a guess like 13 did. House gives Amber points and asks Foreman to do the tests. Foreman doesn't want to encourage the game and walks away.

House goes to perform the tests on the patient. He says he only plays music for himself, but House asks why he plays on stage. He admits some people like the music, but most can't stand it. What he can't take is people who tell him he's wasting his life. House finds some curious images near his heart. He realizes the patient doesn't care if he lives.

Wilson is apologizing to his patient about the lost broker fee and gives him a check. However, the patient is looking for more money because the diagnosis that he didn't have cancer has taken away the happiness he got knowing that he was going to die.

Taub thinks the echocardiogram is blurry because the patient is in withdrawal and is shaking. Kutner wants to give the patient a sedative to do it again, but House thinks that might be fatal. Taub wants to test to see if a blood vessel has wrapped around the patient's trachea. However, he keeps losing points because he can't suggest a way to test for it. House suggests exploratory surgery. They try to talk Chase into doing it. House asks Chase who he should hire. Taub tells Chase to do the surgery or if the patient dies, people will blame him. Chase prefers Taub and Amber, and agrees to the surgery. They find abnormalities, but the patient's vital signs go into distress during the surgery.

The patient has enlarged lymph nodes. House agrees to stop the game, but Foreman says whoever wins will stay. He tells House to fire someone - it's the only way to end the game. House tries to fire Kutner and 13, but they come up with more ideas. They think that the enlarged lymph nodes are due to impurities in street drugs. House admits they weren't fired. They think the patient might have heavy metal poisoning from tainted drugs.

House continues to listen to the patient's music despite the fact he hates it. Wilson tells House about the patient wanting more money and he thinks House may have told the patient to ask for more money so that Wilson wouldn't give him the $6,000 out of pocket expenses. They start arguing and Wilson finally blurts that House is like his patient - he's afraid to live. Kutner comes in and says that the treatment isn't working, but points out that despite his reputation, the patient works with orphans. House doesn't think it is medically relevant.

House "fires" Taub and Amber to get more ideas. When they don't play along, he fires the other two. House asks who will tell the patient he's dying. When no-one volunteers, he suggests a little kid do it, the patient gets along with little kids. All of a sudden, House believes the fact the patient works with orphans might be medically relevant. He goes to Cuddy to ask for a brain biopsy. Cuddy refuses unless he can show neurological symptoms that would justify it. Cuddy wonders why he brought along the applicants. House says he wouldn't be where he is now unless he had all of them: Amber thinks the patient is a loser, 13 thinks he is a regular guy with problems, Taub thinks the patient will be fine once he matures, and Kutner thinks it is an autoimmune disease. However, they were all wrong and House realized why - the patient just has measles from the kids he is always hanging around. He's not having normal symptoms because the patient's immune system is shot from drug abuse. Amber has noticed that the patient keeps swallowing and thinks it might be a partial seizure. Cuddy tells them they can to the biopsy if they can induce a seizure. House tries playing the patient his own music, and it works. They schedule the biopsy and to meet back in the lecture hall.

House comes in with the results. He start playing back a mellow vinyl record. He tells Amber she played a good game, but for the wrong reasons. He tells her that results don't always count - to work for him you have to be willing to lose. He fires her. He turns to 13 next and fires her too. He tells her he would keep her if he had three spots.

Amber goes to tell the patient he has measles and will live a long life. She tells the patient she got fired. She's with the patient trying not to care about it. He admits it isn't easy.

Cuddy comes in and tells House he screwed up and he can't have three male fellows. She told him to hire Taub and Kutner because she thought House would do the opposite. She tells him he can hire 13 too because unlike Amber, Thirteen actually cares about the patients. All of a sudden, she realizes House planned it that way, so she would have to agree to let him hire three people.