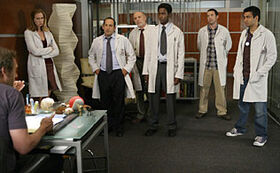 Guardian Angels is a fourth season episode of House which first aired on October 23, 2007. While having a seizure, a funeral-home cosmetician (Azura Skye) hallucinates that she's being assaulted by one of the corpses she's working on. And later, in the hospital, she acts as though her dead mother is in the room with her. Meanwhile, Cameron offers advice to one of the seven remaining candidates for House's team and Foreman has lunch with Cuddy.

Irene, a funeral home cosmetician, is talking to a corpse she is working on to help pass the time. When she goes for a coffee break, she has a hallucination that there is someone in the room who is assaulting her. Soon, the rest of the corpses join in to the attack.

When her co-worker comes in, he finds her on the floor having a seizure.

Cutthroat Bitch and Number 13 discuss the last case and whose fault it was, with Amber saying House is not blameless himself. House calls in on the phone about the patient who sees dead people, but the applicants haven't received the file yet.

Cameron, with House in his office, threatens to send the case to Foreman, but House tells her he was fired from his job at Mercy.

Old guy comes in with the case file and the applicants start discussing the case. House sends some of the applicants to the funeral home and others to do tests.

Cameron and House bet 100 dollars that the Mormon doctor will eventually be pushed to the breaking point and "kick (House's) ass."

The applicants prepare the patient for an MRI. Taub and Amber discuss their chances, thinking old guy is a lock despite the fact it has now been revealed he's not really a doctor. Taub wonders if it would look better to quit or be fired.

Foreman is interviewing for another job. The interviewer asks why he was fired,but he already spoke to Foreman's former boss at Mercy. Foreman says there is nothing more he could add. The interviewer says he could admit he was wrong to break procedure, then suggests Foreman stayed too long with House.

House is mad at Cole for suggesting embalming fluid - the emergency room would have ruled that out. House suggests digging up the dead body to do a brain biopsy to look for Creutzfeldt–Jakob disease. Cole objects, saying he needs to be home by six. House says he doesn't want to do it because of the sabbath, but it's Thursday. House knows Cole is a single dad - his child's mother ran out on them. Cole leaves the room.

Amber comes to see Cuddy, who informs her that sexual harassment claims go through HR, stress-related leave through workers' comp, and accusations of criminal activity go directly to the police. Amber just wants to work clinic duty. Cuddy tells her to do what House told her to do and that if she has a problem with what he has them doing, she should quit because it will only get worse.

Some of the team goes to dig up the body. Someone is coming towards them, but it turns out to be Amber with coffee and doughnuts. The team has gotten to the coffin and break into it to find he was buried the wrong way around.

Cuddy comes to House to tell him she found out about getting the applicants to dig up a body from the dirt and picks. She tells him to clean up the mess. House gets Taub to do it. The brain biopsy is inconclusive. House tells them to get back to work.

The patient is feeling fine and wants to go home. However, they realize that she sees her deceased mother in the room - she's hallucinating again.

House is lambasting the applicants for failing to detect the hallucinations. He says they missed something. Old guy points out she's not only hallucinating, she's having delusions because she thinks her mother is still alive - that's a new symptom. They ask the patient what her mother died from, but the patient continues to deny she is dead. Irene also talks about a man in a wheelchair who says Thirteen killed his dog.

Cuddy meets with Foreman. She needs someone to understand and control House, but Foreman isn't interested. Cuddy offers him more money, but Foreman believes Cuddy is working behind House's back and rejects her offer.

The applicants report to House that the patient is seeing the dead patient from 97 Seconds. House tells them to run more tests. House tries to bait the Mormon into beating him up to be fair to Cameron's side of the bet. Dobson suggests asking the hallucination of the mother how she died.

House goes to see the patient to talk to her mother. The patient is seeing a third hallucination - an older man who looks like House. House says that it's "Grandpa House." Irene says the hallucination identifies himself as Walter, and House leaves the room. He goes to tell Wilson about it and that he didn't have a grandfather Walter. House says he's pretending to be spooked so that Irene will trust him. He goes back to her room.

House talks to the patient about her mother and discovers the symptoms she had prior to her death. House leaves the room. He tells the applicants she has Parkinson's disease.

Cameron goes to talk to Cole. She tells him to stand up to House to earn his respect, but he rejects her advice.

The patient hallucinates that 13 and Kutner are trying to stab her with a large intravenous needle. 13 wakes her up, then notices the patient's arm is bleeding in several places.

Parkinson's doesn't explain the lesions, but Dobson thinks it's vasculitis. When Taub challenges his conclusions, Dobson comes up with a rational explanation on medical grounds. House goes with Dobson's idea and orders steroids.

Foreman goes to an interview with a doctor who knows House. He too knows about Foreman being fired and likes the fact he stood up to his boss. However, he doesn't want to take the risk in hiring Foreman.

The patient is still talking about Stark while they test her. All of a sudden the patient starts bleeding from her mouth.

Cole goes to help Chase in surgery with the patient. Chase has no advice and said he put up with House. He tells Cole House will fire him sooner or later. They see House in the observation gallery, who points out the patient is bleeding. They find that her liver is necrotic.

Taub insists he was right about Irene having porphyria. House notes they are fighting amongst themselves to see who is right while ignoring the patient.

Cole starts praying in the ear of the patient, who tries to grab him before they can start an angiogram.

The applicants come to see House saying they couldn't complete the angiogram. House continues to argue with Cole. He wants to concentrate on the patient, but eventually strikes House. Suddenly, Amber realizes the problem - ergot poisoning from the organic rye bread the patient was eating. They tell the patient it explains all of her symptoms. Once they start treating her, Irene is willing to accept that her mother really isn't there.

House meets with the applicants again. He has flowers for the six he is keeping. House says they're roses and Kutner corrects him, saying that they are peonies ("I'm sure they're part of the rose family"). He is surprised Cole is sticking around, and House does keep him on. He keeps Amber on because she was feeding the patient information so that she could freak out 13. House keeps 13 on too. He gives the young doctor and number 6 flowers too. He gives the plastic surgeon the last flower, and fires Dobson because "You don´t need someone to tell you what you're already thinking." Cameron collects her bet from House.

Foreman comes to see Cuddy to make a deal, but Cuddy won't offer him anything special because she knows he's unemployable. The only one who'll hire him ("House lite") is the one who hired "House classic," but she'll pretend she's not doing him a favour. Foreman agrees to come back.