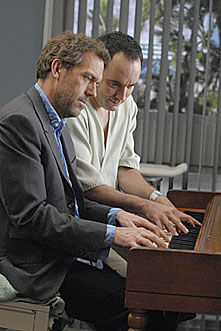 Half-Wit is a third season episode of House which first aired on March 6, 2007.

During a performance, a savant pianist starts hitting the wrong notes for the first time in his life. He soon stops playing and complains that his hand hurts from dystonia.

The pianist is taken to Princeton-Plainsboro. House wakes up his team in the middle of the night. They discuss how the patient became mentally handicapped after an auto accident when he was ten. House is fascinated how a ten year old with no musical training became a musical genius. He orders a lot of tests.

Foreman does the physical exam, and finds the patient has many cognitive difficulties but is otherwise responding normally.

House meets the patient and plays the opening bars from "I Don't Like Mondays". The patient copies him perfectly. He also has perfect pitch. The patient is in excellent health, but House wants him to stay. House starts playing a piece he once started to compose, and the patient finishes it.

House gives the patient a brain MRI while playing music to him, but the patient's brain shows nothing special until they get him to pretend he's playing a piano. However, this indicates he has a condition that makes the arteries in his arms constrict. The patient needs surgery.

Cameron finds a letter which indicates that House might be looking for a new job. Foreman remembers the blood sample, which is common for people getting medical clearance for employment. Cameron and Chase go to search House's home for clues.

The surgery does not go well and the patient goes into cardiac arrest.

Cameron and Chase find a phone number for Massachusetts General Hospital. They report to Cuddy, who calls Mass General. She soon figures out he's not looking for a job, he has spoken to their oncologist in charge of brain cancer.

Cuddy speaks to Wilson. Wilson says it's not unusual for a patient to show no outward symptoms or not tell anyone. Cameron asks Wilson what is up with House. She is afraid she has to look for a new job.

Wilson finds House playing the piano. Wilson figures out House is envious of his patient's abilities. Wilson tells House he knows about the cancer. However, House is optimistic. Chase tells House the patient is bleeding internally. He also tells the patient had a seizure even though he's on anti-seizure medication. House figures out Chase knows about his cancer diagnosis, as does the rest of his team. Wilson admits to telling Cameron. House suggests hurting the patient's brain on the theory they can't do much more damage anyway.

Cameron tells House she doesn't want to work at Princeton-Plainsboro if he's not there. She kisses House. However, she was just trying to get close enough to get a blood sample, but House catches her. He finally gives Cameron his medical file, which is hidden under another name. The team reviews the file and confirms the diagnosis.

The patient has another seizure. The team finds out House's treatment is not designed to reduce the cancer, only treat depression. House wants to work on the patient, who shows one side of his brain working harder than the other. House goes to see the patient, and tells him about his team's efforts. He asks his patient if he enjoys his life.

Foreman is calling around to brain cancer doctors, but House catches him and tells him he's wasting his time. House tells the team the patient needs a brain biopsy because he is bleeding all over the place. The team is not supportive because they liken it to working blindfolded. However, Foreman suggests doing an EEG from the inside of the brain - dangerous, but it might work. House agrees with Foreman, and Foreman is surprised. He explains the procedure to the father, who consents to it.

They drill holes in the patient's skull. Foreman gets the results, but wants to tell House he admires him because of his faults. House blows him off. The EEG showed the patient's entire right hemisphere is brain dead.

House admonishes the team for letting half the patient's brain die. The seizures are getting worse. The patient can't recognize anything seen through his right eye. However, he still has the ability to play the piano. This indicates that the right side of his brain has probably been inactive for years.

Chase comes in because he wants to hug House, and does so after warning House of what he is going to do. When House asks him if he is crying, he lies that he is not, and leaves. Although the patient is getting better, House wants to improve the patient's cognitive abilities.

House goes to Cuddy in the middle of the night to tell her the diagnosis, Takayasu's arteritis. He proposes removing the right side of the patient's brain. He argues that the right side is holding the left side back. Cuddy allows House to discuss it with the father.

Meanwhile, the team is doing tests on House's samples, hoping to find a way to beat his cancer.

The father goes to speak to his son. He asks if he is happy, but his son doesn't understand the question. The father agrees to the surgery, which goes without incident.

The team show up at House's home with good news - he doesn't have cancer. However, House tells them the truth - the file was someone else's (meeting another real cancer patient only has Syphilis and only needs antibiotics). He only wanted to get the treatment to try out the pleasure drugs they were going to inject him with. House sends them away and goes back to bed as they've already told Mass General the new diagnosis.

Wilson asks House if he is depressed. Wilson is astounded that he faked cancer and then pushed away the people who cared, something real cancer patients don't do. He suggests that House go to get pizza with a friend if he's feeling down.

The patient recovers from the operation. He can't talk, but otherwise seems fine. However, he then demonstrates a new skill - he buttons up his shirt - that he didn't have before the operation. House notes he looks happy.

A patient comes in complaining about a sore foot. House gets a patient to help him tie off one of his own veins so he can take his own blood. He tells the patient she has a blister on her foot, but he also figures out that she is bulimic and has to stop vomitting. House then orders Foreman to test the blood, but doesn't tell him whose it is.

This episode guest-stars musician and actor, Dave Matthews as Patrick, the talented piano-player while Kurtwood Smith appears as Patrick's father. It should be noted that Dave Matthew's song, Some Devil was played during Love Hurts while Kurtwood Smith is well-known for starring in Dead Poet's Society in the late 80's as the gruff Mr Perry alongside Robert Sean Leonard who portrayed his son, Neil.

The song that House has Patrick play to make him stay is I don't like Mondays, by Boomtown Rats. Written by Bob Geldof.