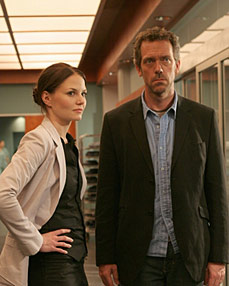 An obese 10-year old girl, Jessica, is at home and not feeling well as she's supposed to be going off to school. Her mother feels she is just trying to avoid school because all of her classmates are bullying her. However, while skipping rope during exercise class she complains that her arm and chest hurt and she collapses from a heart attack.

House is trying to deal with a conundrum. On Vogler's orders (backed by Cuddy), to make his department more profitable, he has to fire one of his three staff members. Cuddy tells him he has a week.

Cameron comes to House with Jessica's case. Foreman is incredulous - 10 year olds don't have heart attacks, but Cameron shows all the tests are positive. Chase feels it is just her weight. However, House thinks there must be some other underlying condition. He suggests testing her insulin levels - they might be too high. He also drops the news that one of them will fired. Cameron realizes it is Vogler, and Foreman realizes they all have to stick together.

The mother is resistant because Jessica is already on a diet and exercising regularly, which would be the treatment for the condition they suggest she has. The patient resists being weighed, but Chase insists they need an accurate measurement. Foreman tells the kid he used to be heavy too, but grew out of it. She steps on the scale. Chase and Foreman then argue about whether you can "grow out of" obesity. Cameron is not on Chase's side, and Foreman puts down his crankiness to his impending firing.

Wilson warns House not to take on Vogler as House lacks any talent for office politics.

They start the test, but Jessica starts to turn angry and demanding. The doctors think she has become hypoglycemic and they are forced to sedate her. Foreman explains the psychosis was normal, but the mother is mad that they weren't taking the test seriously. House comes in and reports that she was negative for hypoglycemia and diet and exercise have nothing to do with her condition, and the psychosis wasn't their fault either.

Cameron and Chase argue about whether the patient's weight has a bearing on her condition, with Foreman staying out of the frey. However, House suspects she may be taking diet pills and orders his team to find them. Foreman is angry that House has turned the team against each other to compete for the job. He asks Foreman who he will fire, and when Foreman doesn't respond, he fires him. Foreman suggests he fire Chase because he really doesn't need the job.

House is surprised that Foreman chose anyone - he usually doesn't enter into the fray. He discusses it with Wilson, who suggests that House quit.

Foreman goes to the patient's teacher. She tells Foreman that Jessica's only friend is an older kid who was assigned to her.

Vogler is upset that House hasn't fired anyone yet. He goes to Cameron and offers to help if she gets fired.

However, the patient develops a new problem, she starts bleeding from a skin necrosis on her chest. This can't be explained by the diet pills. House thinks that they gave her the wrong treatment - Warfarin, and that Cameron must be at fault. Chase and Cameron argue about whose fault it was. House tells them to take care of the patient.

Vogler goes to see Foreman. Vogler realizes that they screwed up the medication. He wonders why he's working with House. Foreman says he respects House. Vogler asks Foreman if he wants to keep his job.

House goes to see Cameron, who swears she gave the patient the right medicine - Heparin. Cameron asks why House isn't backing her when she backs him. He asks Cameron who she would fire. She suggests cutting everyone's pay. He says it won't work, but she reminds him he's stalling.

However, House goes to Cuddy and Vogler with Cameron's idea. Vogler shoots it down. Cuddy realizes Vogler doesn't care about the money, he only wants to boss around House, and Vogler confirms that.

The treatment is not working, and Wilson points out the necrosis is killing the patient. House agrees to have it removed. However, it means removing the patient's breasts.

Cameron comes to see House to see if he wants to fire her. She claims she didn't make a mistake. House thinks she did, but Cameron thinks House has feelings for her. Cameron wonders why he didn't make this firing a challenge for them to work out, and why he's not doing his usual solo activities.

Chase meets with Vogler about whether he will protect him if House fires him. He tells Chase that either Cameron or Foreman would do just as well.

The patient isn't improving and they start to prepare Jessica for surgery. House wonders if it could be that Cameron didn't give her the wrong medicine. Finally, Chase says what if the obesity isn't a cause of the problems, but a symptom. Finally, House realizes that the patient's mother is not just heavy, but tall, as is the patient's father. House deduces that her obesity is a symptom – along with her height (shorter than normal for her age), he concludes it's Cushing's Disease, which causes hyper-cortisol that could account for her symptoms. However, if they treat her for it if she doesn't have it, she will die, but House points out that if they're right, the surgery on her breasts won't help her. He suggests using a MRI to locate whatever might be be able to cause the high cortisone levels. They do the MRI and find a tumor on the pituitary gland that accounts for the symptoms. She needs surgery, which is dangerous, but she will improve quickly once it is removed, including losing weight.

Jessica comes in for a follow up visit and has lost a great deal of weight. Even Chase is impressed.

We're left with Cameron writing up her resume and everyone pondering their position.

A woman comes in complaining of a burning sensation in her chest. However, House thinks it is just heartburn. He also thinks the woman, who is on the heavier side, is pregnant. However, she says that this is her normal body shape and that her husband uses condoms. House goes to get some antacids, and makes up an excuse to draw a blood sample to test it for the hormones that appear during pregnancy.

However, the blood tests turn up something surprising - a 30 pound benign tumor. However, she doesn't want to have surgery because of the scar, and figures the doctors want to change the way she looks.

The patient's husband shows up to see House. He doesn't mind her being overweight. The husband is still concerned and asks House to lie to the wife so she will have the surgery. He agrees to see her again after seeing photos of the kids.

House has realized that all the kids aren't her husband's. He realizes that although the husband is okay with the surgery, her lovers won't be. He tells her that other men won't care about the scars either, and she agrees.