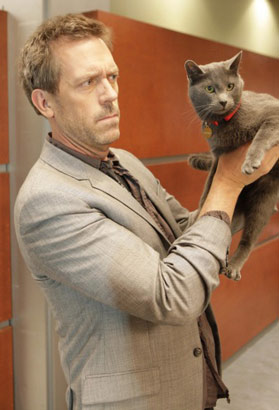 Here Kitty is a fifth season episode of House which is scheduled to air on March 16, 2009. Nursing-home worker Morgan fakes sick to get House's attention after the home's pet cat sleeps next to her. It seems that the cat only pays a visit to people if they are about to die – and does so with alarming accuracy. While House dismisses Morgan as a nut job, he is intrigued by her theory on the kiss-of-death cat, and sets out to disprove it. When Morgan falls seriously ill, he and the team are forced to get to the bottom of both mysteries. Meanwhile, Taub tires of having to live on a lower income and a chance meeting with an old friend seems to provide him with new opportunities.

House is playing with a toy race car on a homemade track in the clinic. Cuddy comes in with a patient and removes a piece of the track. The patient, a nurse, complains she is run down, but has no other symptoms. Suddenly, the nurse collapses with a seizure and House calls Cuddy in and tells her to send him the patient's file. House is aware the patient has urinated, but Cuddy points out the urine is green.

The patient is a 35 year old nurse at an old age home. The team starts a differential when Taub comes in late. House orders an environmental scan, but Taub notices the disease is not life threatening and wonders why they are wasting time with her.

Kutner and Taub go to do the environmental scan of the patient' office. Kutner thinks there is something wrong with Taub because he was arguing with House. However, Taub is pleased - he's found a drug that makes a person's urine green. Taub goes back to House and says the patient is obviously faking. However, House thinks the patient's seizure was real and he thinks it is phenol poisoning. He orders Taub to search the patient's home too.

Taub runs into an old high school acquaintance in the hospital lobby who banged his leg. Instead of going to do the scan, he goes to treat his friend.

House goes to see the patient, who is asking about the results of her tests. House wants to induce another seizure and the patient agrees. House flashes lights and the patient seems to seize. However, he tests her and realizes the seizure was fake. House is not looking forward to telling Taub that he was right when the patient begs to be treated because a cat has predicted her death, but House has no interest in the case.

Taub examines his friend. The patient has been feeling dizziness. They talk about the friend's profession - he's a CEO of a company that makes medical devices. Suddenly, the patient feels better - he only had a calcium deposit in his inner ear. The friend insists on buying him dinner, but Taub declines.

The patient brings the cat to House. The patient tells her that the cat only sleeps next to people who are about to die, and the cat slept next to her. She begs House to watch a video, but she suddenly starts wheezing. House thinks she is faking again, but Foreman comes along and takes out his stethoscope. He confirms she is having a bronchial spasm, which can't be faked.

House and Cuddy watch a news report about the cat. Cuddy is surprised that House now wants the case. Cuddy wants proof the patient isn't faking, or she's going to discharge her.

House asks for a differential for the bronchial spasm. He's brought the cat along. House still thinks it's probably a coincidence, but Foreman thinks the cat might be the cause of the deaths. When Taub sees House with a cigar, he finds the box and realizes the cigars were for him. House also has found out that Taub is suffering financially.

Kutner presses Taub about his mood and he finally admits that he doesn't want to tell his wife that they have to cut down on their lifestyle. The tests show the patient's lungs are fine.

House brings the cat into the coma patient's room. Kutner thinks that House thinks that there is something to the cat knowing who will die. Taub thinks that the patient only had a laryngospasm. Suddenly, they notice a patient with welts and Thirteen notes that the patient is allergic to cats. The cat goes to one of the beds and House makes a note. House orders a methacholine challenge.

Cuddy realizes House still has the cat - she finds a litter box. She then sees some of the oncology lab's genetically modified mice and she takes them back. Cuddy has also learned that the methacholine challenge test was negative and she orders the patient discharged.

House takes the patient outside and starts smoking a cigar. He asks her why she's worried about the cat. He has figured that she had a child and something bad happened. It was a stepson and he choked to death despite receiving immediate first aid. The patient starts coughing and has a rash on her neck. She complains she can't breathe. She's having another bronchial spasm.

House thinks it might be Churg-Strauss syndrome. He orders Taub to empty the litter box. Foreman tells him to do it to please House, but Taub leaves instead. Kutner finds the cat in his backpack. House orders steroids for the patient.

Taub goes to see his friend. He talks about his old life as a plastic surgeon. He admits he had an affair with his partner's daughter and that's why he's not doing it anymore. Taub asks his friend if he likes his job, and he admits he loves it. Taub gives him advice on his new medical instrument and the friend is pleased with Taub and mad at his staff.

The patient complains her urine is brown.

Thirteen thinks the patient may still be faking because brown urine doesn't make sense - there is no cause. Foreman thinks it might be something purple mixing with the green urine. This would be indicative of cancer. Kutner realizes that House is deliberately doing things that break superstitious taboos. Taub apologizes for being late, but House realizes he was out late. He thinks Taub lacks courage.

House takes the patient to see the coma patient who the cat went to. That patient is still alive. The patient dismisses the negative information. House starts talking about a preacher who kept getting the date of Christ's return wrong, but whose flock still followed him. The patient still thinks something terrible is going to happen to her.

House discusses the case with Wilson. House wants the patient to act more rationally. House takes the cat to the pediatric oncology ward. Wilson sends the kids back to their room.

House reviews the tape of the pill camera swallowed by the patient, but it reveals nothing. House gets the cat to attack Kutner by shining the laser pointer at his leg. Thirteen notes the patient is not very sick. Kutner thinks it might be a melanoma. House agrees.

Kutner calls House in the middle of the night. They found spider veins on her back, but no melanoma. That is common with Cushing's Disease, but House wonders why Kutner is calling him about a non-life threatening condition. Kutner tells him that the coma patient that the cat went to has now died after 18 months of being in stable condition.

The cat has escaped and the team starts looking for it. House now thinks that there is something about the cat. Kutner thinks that the cat could detect disease with it's nose. All of a sudden, House starts to wheeze and he spits up blood. However, he was faking to punish Kutner for leaving the door open. He orders the team to find the underlying cause of the Cushing's.

Taub asks his friend if he can come work for him, but the friend has no positions open for someone who doesn't have an MBA. He then asks if he can invest, but he can't afford the minimum. However, the friend agrees to let him invest a smaller amount.

House starts an autopsy on the dead coma patient. Chase has been looking for the cause but they can't find it. Chase asks if House is sure it is Cushing's. Wilson asks House why he's dealing with the dead patient rather than telling the patient what to do. He can't figure out why House is acting this way.

Chase gives the patient her options about treating the Cushing's - drugs for life or brain surgery to remove her pituitary gland. She wants to have the surgery. Chase understands her feelings, but thinks she's being superstitious. He agrees to perform the surgery.

The patient is taken to surgery.

Taub comes in to quit. House won't accept his resignation because Taub says he doesn't have a new job and House thinks he will be back. Taub leaves the office. The cat finally comes back to the office and jumps on House's laptop. House starts petting him and realizes how warm the keyboard is. He looks at a picture of the cat with a patient in the nursing home and smiles.

Taub goes to his friend's office and finds out he was a fraud - the whole thing was a fake. He wasn't even an old high school friend.

House tells Wilson that the cat was trying to keep warm. Most of the patients were either feverish or had a heating blanket on them. They realize the patient was feverish and does have cancer in the only place the pill camera couldn't reach - the appendix. House realizes that the patient is currently in surgery and calls them to call it off.

The patient thanks House, but he notes she was willing to cut out a piece of her brain because of a superstition. The patient wonders why the cat sat on his laptop at that moment. She has also found that the preacher he was talking about was the founder of the Seventh Day Adventists.

House starts playing with his cars again and realizes the cat has peed on his chair and that Kutner is to blame. He tells Kutner to pay for the dry cleaning. When House leaves, Kutner implies to Thirteen that it wasn't a cat that peed on the chair. House sees Taub come back to the office.