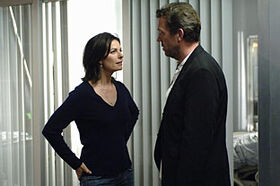 House: "I don’t know what’s wrong with him. It’s not Alzheimer’s. It’s not Encephalitis. It’s not environmental, it’s not immunological, every test is negative every time. He’s perfectly healthy, but his brain is dying. "
Stacy: "It never occurred to me that you couldn’t figure out what’s wrong."
House: "I haven’t given up"
— Honeymoon

Honeymoon is the first season finale episode of House which first aired on May 24, 2005. House’s ex-girlfriend Stacy Warner’s husband Mark is reluctant to be treated by House, but they eventually corral him and get him into the hospital. Although Mark insists he is fine and the initial tests bear him out, it is soon clear that there is something seriously wrong with him. House is torn emotionally between wanting to please Stacy by curing Mark and letting Mark die: either so she might come back to him or to hurt her for the way she hurt him. The matter only gets worse when the only way to confirm House‘s diagnosis is to risk Mark‘s life.

House is trying to fulfill a promise to Stacy by meeting her husband Mark Warner to attempt to assess his medical problems. Finally, Stacy tricks Mark into attending a dinner where he doesn't know House is going to be there. Mark finally shows up and says his doctors have told him any problem he has is stress related and he's not going to the hospital. However, after downing a beer, Mark collapses, thanks to House drugging his drink.

Mark is suffering from abdominal pain and mood swings. Previous tests have not indicated any cause. House orders a repeat of all the previous tests, plus abdominal ultrasound and CT Scans. His team can't understand why House doesn't believe Mark when he says he's not sick, but he believes Stacy who says he is sick.

Wilson believes House is treating Mark merely to impress Stacy and win her back.

When the scans are negative, Mark asks to leave the hospital, but Stacy insists that House be satisfied he has no disease. House responds by ordering exploratory surgery against the advice of his team. He asks Stacy is she’s been unfaithful as that would explain Mark’s paranoia without resorting to an underlying disease. Stacy realizes since House is asking the question himself instead of having ”Dr. Mandingo” do it that he’s only asking to see if its likely she will cheat on Mark with House. She denies being unfaithful. The surgery shows no cause for Mark’s symptoms, only a distended bladder, which would not cause the symptoms Mark has. However, when House reviews the video of the surgery. he spots abdominal epilepsy which has been mistaken for normal peristaltic movement. This indicates Mark is suffering from some sort of neurological disorder.

An EEG shows nerve death, which explains Mark‘s enlarged bladder. They suspect encephalitis and Alzheimer's disease. House also orders Foreman & Chase to do an environmental scan of the Warners' house. Stacy does not believe it is Alzheimer's as Mark shows no sign of memory loss.

Cameron asks Stacy about the condition that led to House's disability, and what House was like before that. Stacy says that House was pretty much the same before the disability. Cameron finishes the test and is able to rule out Alzheimer's.

When Foreman and Chase arrive at the Warners', they find Stacy has left out cookies for them, expecting they would break in as House instructed. The team does find amphetamines with an unknown name on the bottle, but House surmises that Mark, a guidance counsellor, confiscated them from a student as the date of birth on the bottle is for someone 17 years old and the doctor who prescribed them has recently lost his license for writing improper prescriptions. Encephalits is also ruled out and House still thinks Alzheimer’s is most likely despite the negative test.

To see if the Alzheimer's test was wrong, they scan Mark's brain. House takes the opportunity to seem to make fun of Mark's relationship with Stacy. Stacy is furious when she finds out, but House tells her that the questions he asked were medically necessary to gauge his emotional response. He then admits he has no idea what is wrong with Mark, only that his brain is dying. Stacy is stunned - she never thought that House wouldn't be able to figure out what was wrong. However, House said he isn't giving up. However, they have to wait for something to change.

Mark soon develops a new symptom - he loses sensation in his toes and hands, the start of paralysis.

They believe it might be Guillain-Barre syndrome, but the tests are negative. House thinks that he may just not be producing the antibodies that the test detects. House decides to treat him for Guillain-Barre even though they can't confirm it because the treatment is fairly safe. However, Mark starts showing more paranoia. His throat then closes up. However, House notes his vital signs are still strong - he is suffering a panic attack, not an allergic reaction.

Meanwhile, House confronts Stacy about not telling any of their common friends that Mark is in Princeton-Plainsboro (from looking at Mark's get well cards). He believes it is because she didn't want them to know she was seeing him again.

House goes to meet Wilson in a bar, taking him away from a dinner party thrown by Wilson's wife. House confides that Mark is not responding to treatment, and that he is having feelings about Stacy, although he isn't sure they are positive ones. House goes back to talk to Stacy, when he finds out from her that although Mark said during his brain scan that they went to Paris on their honeymoon, they never went (Stacy had to go back to work the day after the wedding). However, the brain scan indicated that Mark actually believed he went to Paris - he's having delusions. He's also deciding to take up activities that are indoors, avoiding sunlight. These are symptoms of acute intermittent porphyria. Unfortunately, there is no immediate test for it unless he is actually having an attack, the regular test takes at least a month, anything they do to start an attack to confirm it could kill him, and another attack could kill him. Treating him for porphyria without confirming it could kill him too.

However, House has a plan. He wants to induce an attack so they can test for the markers that will be present in his urine at that moment. They explain the risks of inducing an attack to confirm porphyria to Mark, but he rejects it as too risky. However, Stacy pleads with House to try to induce an attack. When she asks him to induce an attack he refuses on the basis that Mark doesn’t want him to try. When House informs Stacy that her husband may die, they confront each other about her decision to consent to the procedure to cut out the dead muscle in his leg that led to his disability. House says that he will never forgive Stacy for that, but she retorts that Mark will forgive her for making such a decision.

Mark doesn't trust House even though Stacy still does. House decides to induce an attack even without Mark's consent. His team unites to try to stop him, but he fakes them out and injects Mark with the cocktail of drugs that will definitely bring on an attack. Mark goes into convulsions while House uses a large syringe to draw urine straight from his bladder after the catheter falls out. However, the test confirms the diagnosis.

Cameron learns from House's treatment of Stacy that House is capable of love. However, Cameron tells House she realizes he just doesn't love her. Stacy admits to House that she is still in love with him, but can't be with him. She say she can't stand the fact that House believes he is always right, and he almost always is right. However, she wants to be with Mark because she felt lonely with House.

Cuddy comes to House and tells her she is considering hiring Stacy to be the hospital's general counsel so she can help take care of Mark while he recovers, but only if House agrees. House does.

House is last seen trying to walk without the assistance of his cane to the strains of You can‘t always get what you want. However, when he cannot, he reaches for his Vicodin.

Cameron: "What happened to "everybody lies"?"
House: : "I was lying."
―Cameron asks why House trusts Stacy’s word over Mark’s