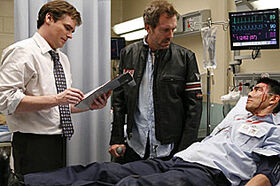 House's Head is a fourth season episode of House which aired on Monday, May 12, 2008. House suffers a concussion in a horrendous bus accident and loses his memory of the events just before the crash. However, as he starts to recover his memory, he becomes sure that one of his fellow passengers was suffering a life-threatening illness and risks his own recovery in order to prove that he was right.

House is at a strip club, but he is having flashbacks about injured people. He thinks he's drunk and starts testing his memory with one of the strippers giving him random words. He then notices he's bleeding, but he can't find a wound. However, he has blood all over him. When he closes his eyes he sees someone he's seen who is seriously ill, but he can't remember who. He leaves the club and finds himself at the scene of a huge accident, an overturned bus.

House is at the emergency room and has a concussion. He's talking to Wilson with Cameron treating him. His team comes and he orders them to take a medical history from everyone in the ER to find the person with the mystery symptom. He starts to think it might be the bus driver.

They find the bus driver. House thinks he has signs of leukemia, but it's just the bruise from his seat belt. House doesn't want anyone from the ER to leave, so he claims one of the patients has meningitis.

House is trying to reconstruct what he did after he left the hospital the previous night. The team has tracked down all the bus passengers, and the only thing wrong with them is from the accident. The team goes back to the ER and Kutner tells House to relax. Medical hypnosis is suggested. Chase and Wilson help House to relax so he can recover his memory. Just as House is about to quit, he visualizes the bus. He remembers he was at a bar getting drunk. Wilson wants to know why he was drinking without him. House remembers some people at the bar. Amber starts to impinge on his vision, and Chase manages to get House to force Wilson and Amber out of his consciousness. House remembers the bartender, who seems fine. He remembers the bartender took his keys, so he had to take the bus. He remembers a pretty girl and a young man coughing.

He finds the young man and tells him he has a brain tumor. He manages to examine the patient, but he can't find any signs - he's fine. Cuddy wants to admit House. All of a sudden, the bus driver finds he can't move his legs.

House and his team start to do a differential on the bus driver's paralysis. House wants to concentrate on diagnoses that would have had visible symptoms that he could have seen. House goes to smell stuff from the bus to recover his memories. Foreman decides to give the patient antibiotics. All House can smell is exploding bus, but he dives into the clothing. He finds himself back at the bus. The bus driver tells him he's hallucinating and he should have a CT Scan. House sees a woman who wouldn't be on the bus. Wilson revives House and gives him an MRI. The MRI shows he has a longitudinal fracture of the temporal bone which is why he has concussion. Wilson and House start talking about why House was thinking of Amber. Wilson realizes House has feelings for Amber instead of treating her like a sex object.

Cuddy wants House to go home and rest. Wilson wants to know why House is risking his life for this patient. House does go home, but he keeps working, and having headaches.

The patient starts to improve - the antibiotics appear to work. However, the patient's stomach starts to hurt. House thinks it might be Addison's Disease, but Foreman rules it out. Foreman notices House's ear is bleeding.

House decides to take a sensory deprivation bath. He sees Cuddy on the bus. House starts fantasizing about her, but she's also talking about the patient's symptoms. The bus driver confronts him about his own symptoms. All of a sudden, the wealthy woman shows up again, and House sees the driver help someone into the bus. House notices the driver is shuffling his feet, indicating Parkinson's disease. He gets out of the tank and announces it, but he suddenly collapses.

House regains consciousness. He's in his apartment with a nurse. House realizes that the patient doesn't have Parkinson's. The team finds out House has a small skull fracture. House calls his team, who has already realized Parkinson's was the wrong diagnosis. He orders a test where the patient eats bagels on a treadmill. House manages to dodge the nurse to call Kutner. He listens to the patient's labored breathing. All of a sudden, the patient collapses and is wheezing. House realizes the test was pointless; he doesn't have what they were testing for.

Cuddy gives in and allows House back. As they take the patient to the operating room, House thinks that an air bubble got under his dental caps. That would have caused a myoclonic jerk which House saw. Thirteen trusts him and grabs a syringe. She finds the air bubble and the patient improves immediately. This might also be the first time we learn of 13's real last name when Cuddy refers to her as "Dr. Hadley", however House replies that "Cuddy doesn't even know your (Thirteen's) name."

Cuddy orders House to get some sleep. He dreams about the wealthy woman who wouldn't have been on the bus. He realizes that he's missed something. He finds a tourniquet in his hand. He ties it around the woman's leg. She says she's cold. House tells her to stay with him - something he would normally say to someone he was treating who was suffering from shock. House wakes up Cuddy to tell her he saved the wrong person.

House realizes the crash caused the air bubble to dislodge, so he couldn't have seen it before the accident. Cuddy takes House's vital signs.

House grabs a bunch of volunteers and puts them on a bus. House starts to remember things, and starts taking Alzheimer's drugs to improve his memory. He starts having another vision and he sees the woman too wealthy to be on the bus. He can't figure out who she is. He sees her necklace is made of a resin, but realizes what it really is - amber. He remembers Amber was on the bus with him. He remembers that Amber was hurt and was going into shock when her thigh was impaled. House tied a tourniquet around her leg. However, he passed out and when he awoke she was gone. He got out of the bus by himself, but was disoriented.

We see reality and they are giving House CPR. He tells them he remembers Amber was on the bus. Wilson realizes that he hasn't heard from her in hours, and House quickly realizes that she was one of the Jane Doe patients, and the one who is dying.

This episode is similar to No Reason as House has multiple hallucinations due to injuries he sustained at the beginning of the episode which he uses to help diagnose a patient.