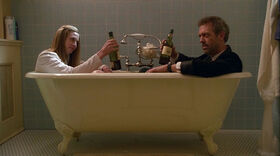 House Divided is a fifth season episode of House which aired on April 27, 2009.

Seth Miller, a 14-year-old wrestler, is going into the ring. His girlfriend and translator Laura encourages him. His mother, Ellie, is wearing a deaf pride shirt and cheering him from the sidelines. He takes on his opponent but clutches at his head when he suddenly "hears" loud explosions.

House is at home trying to sleep but his hallucination of Amber is keeping him awake. He insists she's brought on by insomnia, but she asks why he's hallucinating about Wilson's dead girlfriend. She suggests it might be guilt over Kutner's suicide. Before he can get back to sleep, he gets a page. Later, House staggers into the conference room and the team brings him up to speed on Seth's case - he has exploding head syndrome, showing his brain can hear but his ears don't work. Seth went deaf at age 4 due to meningitis, and Thirteen wonders why he doesn't have cochlear implants. Seth was also the product of artificial insemination and has only one parent. House suspects a seizure and has them run tests, even though Amber, representing his subconscious, doesn't agree with him and talks about the limp leading the blind.

House goes to get a prescription for sleeping pills from Wilson, and finds him with Cameron. Wilson hastily closes the file they're reviewing and Amber notices it. She also notices Wilson gave him the sleeping pill prescription without a lecture. House knocks over a cup and grabs the file, and discovers it contains flyers for bars. Cameron admits she asked Wilson to plan a bachelor party for Chase. House cheerfully volunteers to do it over Cameron's objections. Amber asks if she gets to help.

Thirteen and Foreman do the seizure tests and Thirteen notes that it's admirable that Seth doesn't want cochlear implants as a matter of pride and culture. Foreman doesn't buy it. They're interrupted when Ellie, Seth's mother, informs them that Seth has gone blind in one eye.

House remembers Amber's early comment. The team suggests a variety of tests and House tells them to go ahead. He grabs his sleeping pills and goes into an exam room, then wonders how "Amber" knew the patient would go blind. She explains how the stress of the seizure test would cause inflammation, causing the blindness. Amber then suggests he play loud music to the patient. House takes a boom box to Seth's room and to the patient's amusement puts it on his chest. Seth admits he can't feel the vibrations in his hands but can feel them in his abdomen, indicating neuropathy. House tosses the sleeping pills away, admitting the case just got interesting.

Foreman wonders how House knew about the neuropathy, and Amber reminds him with juggling pins and and House remembers that Seth was "pinned" in his last three matches, indicating a loss of balance. Foreman suggests that it might be increased ICP from a brain tumor and Amber agrees. House backtracks and suggests NF2 cancer may have caused Seth's deafness. House tells Taub to test via MRI and then has Thirteen and Foreman check out a strip club for him. As Thirteen slips a stripper some money, Foreman wonders why House is so insistent on doing the bachelor club. He suspects that House is trying to get Chase to cheat with another woman.

Taub explains that they can remove the NF2 cancer and restore Seth's hearing. Seth wants them to remove the tumor but leave him deaf. Seth doesn't want to lose his school and his girlfriend, but Laura and Ellie point out he has no choice. However, the tests show no cancer. House does notice a slight bowing of the fourth ventricle that might indicate a tumor. Taub doesn't agree and the only way to confirm is to drill into his brain for a biopsy, and House wants to proceed. However, Amber suggests they look at Seth's old x-rays from when he broke his nose and Hosue agrees.

Wilson is explaining to Chase how he and his third wife eloped to avoid House's bachelor party for him when House arrives with the x-rays. As Wilson examines them, House suggests that a bachelor party is a test of Chase's commitment. Wilson confirms the bowing of the ventricle is new, which means they still need a brain biopsy to confirm. Wilson tells House he won't go to the bachelor party because he always gets embarrassed at them. House says it's okay and leaves.

Chase performs the brain biopsy while House and Amber watch. Amber suggests they get the stripper from Wilson's party because she might bond with Chase -they both like cats. Chase wonders who he's talking about, and then tells House there's no sign of cancer in the biopsy. Amber goads House into telling Chase to put in a cochlear implant. Chase wants to wait for the paperwork but House points out putting in an implant wouldn't help him diagnose Seth, so he can't be lying.

Later, Chase checks the implant while Seth tries to deal with all the new noise. While Ellie goes to Cuddy to complain. House warns they can't remove it so soon after brain surgery. Amber points out that Ellie is taking the news calmly and House concludes that she wanted Seth to hear, but didn't have the guts to make the call herself. Once the mother leaves, House tells Cuddy that Seth is opting into a handicap and that's why he told Chase to put in the implant. Cuddy puts Foreman in charge of the case and House accepts it and leaves.

House begins to wonder to Amber why he did the implant. Back in differential, the team determines that Seth is suffering from a fever. Meanwhile, Amber tries different candy in an attempt to get House to remember the name of Wilson's stripper. They wonder if Laura gave Seth Epstein-Barr and Foreman orders tests. House goes to see Wilson, who explains that House ordered the implant because he was trying to be nice. Amber doesn't believe it. When Wilson insists he isn't going to the bachelor party, House just says he has no control over Wilson and leaves.

Seth argues with Ellie about removing the implant, but reconsiders once he hears her say his name. Taub comes in to run the test for Epstein-Barr and Seth urinates uncontrollably onto the bed.

The patient is dehydrated, but stable. The next morning, House has everyone try alcohol-infused ice cream samples for the bachelor party. Taub suggest Sarcoidosis but Foreman notes the symptoms came on too fast. Amber reminds House of a med school case about a wrestler with damaged kidneys brought on by steroids. The team's voices start to fade out as Amber notes that the kidneys failed when the patient was laying down, at night. House tells the team it's Seth's heart and orders tests to confirm.

In his office, Amber explains that House's hearing is fading because he's getting better at ignoring everything that doesn't matter. Chase comes in to talk about the bachelor party, and tells House to kidnap him for the bachelor party. As House tosses Chase some alcohol ice cream, he finally remembers the stripper's name was Karamel.

Laura talks to Seth and says how great it is that he can hear, and wishes she could have one. Seth insists nobody needs one, but Laura says it will open up a new world for him. Seth doesn't agree. Laura asks where the bathroom is, and Seth notices how she sounds for the first time. Thirteen says it'll take time for his voice to sound normal.

House is guzzling energy drinks when Taub and Foreman tell him that all the tests show Seth's heart is fine. Amber insists it isn't, and that the arrhythmia is hiding. House suggests they put Seth on a treadmill, but Foreman refuses because of the possibility of bleeding of the brain. Foreman has Taub and Thirteen run a thyroid panel. Once they're gone, House tries to figure out how to runs the stress test on Seth. Amber suggests asthma meds to make the heart beat faster, revealing the arrhythmia. However, as House prepares the shot, Seth screams in pain after he deliberately rips out the implants. The stress reveals that he has arrhythmia.

House takes over again as they try to figure out what would account for the arrhythmia. They're unaware that Amber is holding up a lit lighter. House orders them to do a VQ scan for embolisms. House goes to the morgue to practice his alcohol lighting routine. He sets a corpse on fire by accident. Amber suggests that all of the symptoms have one thing in common: heat. House calls Foreman and tells him he has Uhthoff Phenomenon, indicating MS. He orders interferon treatment.

As Foreman, Cameron, and Chase leave, two immigration officers arrive to arrest Chase because his work permit has expired. Cameron quickly realizes what's going on and tells Foreman to keep Chase out of trouble.

The bachelor party goes off, with House's flaming drinks and strippers. Wilson comes home to discover that House is using his house for the party. Karamel the stripper comes over to talk Wilson and Thirteen are soon taking shots off of Karamel. House is drinking in the tub and Amber joins him. She points out that he works better alone. In the main room, Foreman and Taub get Chase to take a shot off of Karamel. He smells strawberries… and goes into anaphylactic shock. The others take him to the hospital, but House realizes that he knew Chase was allergic to strawberries. He also knew Karamel used strawberry body butter. He wonders if Amber was trying to kill Chase, which means he was trying to kill Chase. Amber points out he's not a big fan of other people's happiness. He's interrupted when the hospital staff call to tell him that Seth is dying of lung failure, meaning that MS isn't the cause.

As the team arrives at the hospital, House goes to his apartment to get some sleep. House believes that Amber is dangerous, but answers the phone. It's Cuddy, who wants House to help treat Seth. Amber suggests eosinophilic pneumonitis but House dismisses it out loud, and then says he's going to bed and hangs up. Foreman wonders if it makes sense, but Thirteen notes that House ruled it out because it would make the patient's larynx hoarse, but they wouldn't notice that in a deaf person who rarely speaks.

Foreman and Thirteen go to Seth and remove the breathing tube. His larynx is clean, but Foreman notices tobacco stains on his teeth. Seth admits he used chewing tobacco to cut weight for wrestling. Foreman realizes that Taub was right: it's sarcoidosis. The chewing tobacco's toxins held the condition at bay until he stopped. They order treatment so Seth will recover.

House goes to see Cuddy to get sleeping pills. She notes that the police arrested Wilson when he started wandering the streets drunks. Cuddy gives House the pills but asks for an explanation. House admits he hasn't gotten a full night's sleep since Kutner killed himself, and then leaves.

Ellie tells Seth she's going to have the doctors repair the implant. When Seth refuses, Ellie insists she's his mother and it's her call.

House wakes up after a good night's sleep. He figures he's over his insomnia, goes to the bathroom to wash up… and discovers that he's still hallucinating Amber.

The title for this episode comes from a line from Abraham Lincoln's House Divided Speech. It also refers to House's current state of mind.