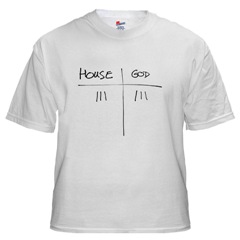 House vs. God is a second season episode of House which first aired on April 25, 2006.

A 15-year-old faith healer collapses in pain during a service.

At the hospital, House and Wilson trade jibes with each other. Wilson reminds House that he hasn't yet invited him to his weekly poker game.

Foreman is examining the patient while Cameron draws blood for tests. The patient claims that God told him about Cameron and how kind she was. They notice that his urine is extremely diluted.

House challenges the patient's beliefs and abilities. The patient assures him that he does believe in doctors and medicine. House asks him about drugs and the patient denies taking anything stronger than an aspirin. However, House notices the patient is drinking large quantities of water.

Wilson is dealing with one of his terminal cancer patients, who is refusing further treatment for her pain. She has always wanted to go to Florence, but is in no condition to do so. Wilson assures her that there is a correct pain medication combination for her, they just have to find it. At that moment, House interrupts. He wants to talk about the patient. However, it is obvious to Wilson that House has figured out the patient's water drinking has led to his low sodium levels. House only wanted to talk about the futility of the patient's faith.

The patient awakes and starts wandering the halls in a delirium. Chase finds him and realizes that he is disoriented. They run into Wilson's cancer patient and the patient lays his hands on her.

The team starts discussing what is causing the patient's delerium. House orders an MRI. Wilson comes in furious because the patient is saying she is feeling better and he is afraid her expectations are rising.

Chase asks the patient how long he has been healing people. The patient asks Chase why he does things he doesn't want to do.

Foreman is still afraid that Cameron is mad at him about the article he scooped her on. He wants to talk about the afterlife, but Cameron won't do it with a person who has identified himself as a co-worker.

The patient comes into House's office and sees that someone is keeping score on the whiteboard - God 2, House 1. House tells the patient that his faith healing is merely the result of a rush of endorphins in the people at the services. The patient says that House only wants to be alone, and House brushes it off as an obvious conclusion. However, the patient then tells House that God wants him to invite Wilson to the poker game. However, when House confronts Wilson, he denies ever speaking to the patient.

The patient's MRI shows tuberous sclerosis, which would explain the symptoms. House marks up a score for himself on the whiteboard (God 2, House 2). They plan surgery for the patient.

Wilson talks to his cancer patient about miracles and how rare they actually are. The patient tells Wilson about how her illness doesn't let her plan for the future. He warns her about the perils of belief.

House is at home relaxing when Wilson shows up a day early. He brings images of his cancer patient, which show that her tumor has shrunk. House tells him not to tell his patient.

The team can't find anything that would result in the cancer patient's remission or a mistake in the diagnostic tests.

House and Wilson play poker with House's friends, who House typically doesn't address by name, but by what they do. Chase calls House from the cancer patient's home - he has found men's clothing. House realizes that Wilson has been having an affair with the cancer patient - she told House's patient that Wilson wanted an invitation to the poker game.

The patient's father comes to the team to tell them his son wants to be discharged.

House and Wilson discuss Wilson's ethical lapse. Wilson rationalizes what happened. Wilson moved in with her after he left House's apartment and lied to House about it. House challenges Wilson about his need for needy people, which also explains his three failed marriages. He reminds him about his license being in jeopardy, but Wilson thinks that House is only mad because he didn't figure it out before.

The patient has a fever which can't be explained by the tumors. House figures that they were just lucky to find the tumors, and that his original symptoms might have been caused by something else. House orders a lumbar puncture, but the patient and father refuse it. The father wants to leave the matter in god's hands.

House goes to Wilson for help. He thinks it still might be the tuberos sclerosis. However, House realizes that the patient passed on a virus to the cancer patient, most likely herpes encephalitis, which can often attack cancer cells.

The patient is still refusing tests, but House only wants to look for sores on his body. The father agrees with Wilson that looking for sores isn't a medical test, and that the patient's water drinking was a futile attempt to purify himself. The son has the sores, indicating he has had sexual contact, but confirming the diagnosis and treatment.

The patient comes in to apologize to House for misleading him. The patient admits he would like to have House's certainty. House realizes that Chase was the one keeping score, and Chase agrees to a 3-3 tie. Chase refuses to knock off a point for the virus attacking the cancer because of the unlikelihood of the event. Wilson points out that it is possible to believe in something yet not live up to it. The cancer patient realizes she is still going to die, but has made plans to go to Florence.

The title of this episode refers to the ongoing contest between House and God.