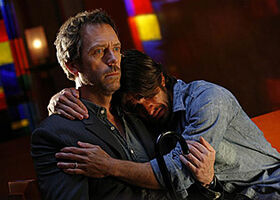 Human Error is the third-season finale, which aired May 29, 2007 in the United States.

A pair of Cuban refugees are rescued in a storm. The rescuers can't understand why the husband refused to abandon his suitcase, but he explains it contained his wife's medical records. At first, the rescuers believe that the Cubans want to go home, but they explain that they want to see Dr. House.

Meanwhile, House is lying low at the hospital until Wilson finds him and tells him about the Cuban woman, who risked a treacherous sea voyage just to see him. He also reminds House to do something about keeping Foreman, but House doesn't see what he can do. Wilson tells him that Foreman doesn't want to become like House, but Foreman has a skewed view of House's real personality.

The team does a differential. Chase believes it is either an infectious disease or parasite. However, House knows that Cuban doctors are competent and would have ruled that out. However, Cubans don't have expensive scanning technology so House orders a series of tests.

House seems to be acting particularly nice to Foreman. Chase is enraged - he tells House that he can't expect to be nice to Foreman for a few hours to get him to change his mind. House calls Chase into his office and fires him, ostensibly because he's been on the team too long.

Foreman and Cameron are doing a PET scan on the wife. Chase comes in and tells them he's been fired. His colleagues are shocked, but Chase manages to spot something on the scan.

Foreman and Cameron confront House about firing Chase. Then Wilson and Cuddy come in and confront House as well. House want to know how the PET scan turned out. Cuddy orders House to re-hire Chase, but House refuses. At that point, Chase phones and House manages to find out the wife has a blood clot. He still tells Chase he's fired. House orders an angiogram of the patient.

The husband is angry that House hasn't found out what's wrong. To get back at House, Foreman gives the husband House's home phone number, and tells him to keep calling until House answers.

Foreman and Cameron prepare for the angiogram. As they perform it, House bursts in and asks who gave the husband his phone number. At that moment, the wife's heart stops beating, although she can still speak. As the patient goes into cardiac arrest, he orders his team to keep her alive until he can figure out why her heart stopped.

House goes to interrupt Wilson in surgery to ask what could stop a heart during an angiogram. The only thing that Wilson can think of is human error, but House rules that out.

Next, House confronts Cuddy and the students she's leading through rounds with the same question. One student suggests human error and House shoots him down. However, they can't come up with an answer either. Cuddy finds out that the wife is still not on heart-lung bypass and orders House to get her on despite the risk of clotting.

The husband finds out about his wife and confronts House. As a result, House goes to the wife, who is being put on bypass. He asks the surgeon to defribrilate the heart. The surgeon does so several times and pronounces the patient dead.

Cameron tells Foreman she will miss him, and Foreman admits he will miss Cameron as well. Cameron gives Foreman a framed copy of the article that they had previously argued over. House goes to his team and tells them they still need to find out why her heart stopped. They can't see the point.

Cameron goes to find Chase in a bar. She tells him she will miss him. Chase admits it was stupid for him to tell Cameron that he liked her every Tuesday. Cameron turns down Chase's invitation to sit down for a drink.

Cuddy visits House in his office. House is afraid that once they do an autopsy, it will be obvious why her heart stopped. Cuddy tells him to face facts and tell the husband nothing more can be done.

House goes to the husband and tells him that although his wife's brain appears to be fine, there is nothing they can do for her heart. The husband agrees to take her off bybass, and they shut off the machine. However, the wife still has a heartbeat, and she starts speaking again. House is dumbfounded.

While everyone is convinced it is a miracle, House is convinced there is an underlying condition that will most likely recur if it isn't treated. He manages to convince the couple to let him try the angiogram again despite the risk.

House performs the angiogram and all goes well. House finds that the patient has a third ostium in one of the chambers in her heart. The ostium is doing nothing but serving as a site for infection. It can be corrected with surgery.

Cameron arrives at Chase's house and asks him to tell her that he likes her. He says it's only Monday. She tells him she couldn't wait.

House finally meets with Foreman to talk to him about staying. They get into an argument about their respective philosophies about dealing with patients, not just diseases. House lashes out at Foreman and Foreman leaves.

Cameron comes in with a letter of resignation, saying she's learned all she can. House reacts with a joke, which is exactly what she expected.

House shares a cigar with the husband. The husband asks House how he feels about losing his entire staff. House tells him he doesn't feel anything about it.

At the end, we see House opening a large box which has arrived at his home. It is a new guitar to replace the one he has been playing since he was thirteen. In other words, it signals House's will to change things and people in his life, and his acceptance of letting Foreman, Chase and Cameron go.