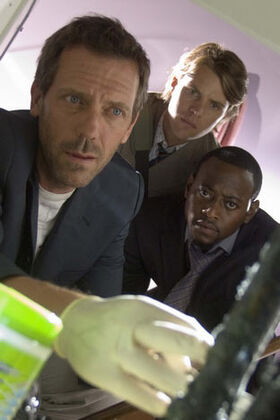 Humpty Dumpty is a second season episode of House which first aired on September 27, 2005.

After Cuddy convinces her Latin American handyman to stay to fix her roof although he feels sick, he promptly falls off the roof. As she rushes him to Princeton-Plainsboro in an ambulance she notices his two little fingers on his right hand are darker than the others.

Cuddy discusses the case with House and Wilson. House thinks it might be a clotting program. Cuddy wants to do the work herself, but House points out she hasn't worked as a doctor in years. However, Cuddy accepts Stacy's advice to keep away from the patient to avoid being sued.

Chase notices the patient's hand is getting worse. The tests show that it isn't a clot. Cuddy orders human activated protein C for severe sepsis. House reminds her how dangerous it is, but she overrules him. However, Cuddy tells Stacy that she is worried about overruling House. However, the patient starts suffering the side effects of the treatment - he goes blind.

The patient has surgery and recovers. However, his fingers get darker, he has a fever, and his scans show lung infiltrates. Cuddy is still concentrating on the fall, but House is convinced that he was sick before he fell. Cuddy admits that the workman told her about breathing problems before the fall. House admonishes her for not telling them - they could have started blood cultures. House orders a scan of the patient's home, but tells his team they are going to break into Cuddy's house instead.

Stacy asks Wilson what House is up to. Wilson admits House plans to break into Cuddy's house.

House makes a bet on how fast he can break into Cuddy's house. Chase and Foreman take the bet, and House finds the key under a rock in her yard. They find some fungus under her sink.

Meanwhile, Cameron and Cuddy are searching the patient's house. Cameron asks why Cuddy hasn't fired House. Cuddy is coy, and says the question is why she hired House in the first place. She admits she knew House when he was in medical school and she was an undergraduate.

Meanwhile, the patient's lung function is declining - it isn't pneumonia. However, Cuddy reports he has rats, and it could be rat bites. House thinks it is the aspergillis they found in Cuddy's house. Cuddy is furious that he broke in, but admits he's right after looking at the patient's X-rays.

The patient's younger brother comes to Cuddy asking to work for her despite the patient's wishes. Cuddy refuses, but the brother admonishes her for not seeing his brother.

Stacy finds House dodging clinic patients. She's worried about Cuddy. Stacy points out that, unlike House, Cuddy cares about patients. He asks House to go easy on her.

The patient says he is getting better, but his brother says that he hasn't urinated in over a day. Cameron is afraid the patient's kidneys are gone. The patient's mother overhears her tell House.

The tests show that it wasn't aspergillis or rat bites. However, Cuddy still thinks his problems related to the fall.

House goes to the patient, and realizes that he is feeling intense pain in his bad hand. He starts arguing for amputation, but Cuddy is opposed because he will lose his livelihood. Stacy doesn't want to hear the argument - she wants to hear them agree. House points out to Cuddy she isn't being objective. They finally agree to recommend the amputation despite Cuddy's reservations. Cuddy goes to tell the patient he needs an amputation. She also tells him the amputation won't cure him, it will only buy him extra time. The patient is still worried that his younger brother will have to quit school to work. The patient agrees to the procedure.

Stacy finds Cuddy. Cuddy tells Stacy that she always wanted to be a doctor, was second in her med school class, but would have killed the patient if House hadn't been looking over her shoulder. She agrees that she's been so eager to advance that she hasn't really been practicing medicine.

The procedure goes well, but at the end, Chase notices that the fingers of his left hand are getting darker as well. The patient's lungs start giving out too. House thinks it is a heart infection that is spreading, and that it might be Psittacosis, a disease spread by birds. They start looking at what he does when he doesn't work for Cuddy. House speaks to the mother in Spanish - he wants to know where the patient works Saturday nights. He figures it is a cock fight. Cuddy and Foreman go to the cock fight and find the patient's younger brother working there and handling chickens. They put him on medication for the Psittacosis. The patient asks why he got sick. Cuddy tells him his asthma made him susceptible and that the disease can be transmitted by breathing in dust.

Cuddy is still feeling bad about cutting off his hand. House comes in and tells everyone they're being sued by the patient. Cuddy tells Stacy to settle the case. House tells Cuddy to get over her guilt, but that her guilt and willingness to make things better makes her a good boss, and that's why she hired him. He asks why everyone thinks they have had sex and if there could be anything to it.

House talks to Wilson, who agrees that there is no way anyone could have diagnosed the disease any earlier than they actually did, but yet Cuddy feels guilty. Meanwhile, Cuddy's roof is leaking.

Foreman has an African American patient with high blood pressure. He wants to give him hypertension medicine that is targeted to his race, but the patient refuses, believing that the establishment gives African Americans sub-standard medicine. Foreman gives him a prescription for the proper drug anyway.

Foreman finds out about House's change of the prescription, but House admits he lied to the patient and gave him the same thing Foreman recommended. However, Foreman is not impressed - he thinks that House is patronizing the patient.