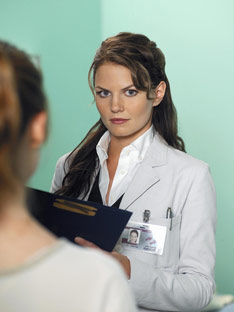 Hunting is a 2nd season episode of House which first aired on November 22, 2005. A man with full blown AIDS follows House home and demands to be treated by him, his condition continues to deteriorate and the answer may be in his father. Meanwhile, Stacy needs House's help to capture a rat which becomes House's pet Steve McQueen.

House shares the content's of Stacy's therapy file with Wilson. It shows that Stacy is frustrated with Mark because of his behavior over not being able to walk. It also reveals Stacy and Mark are not having sex. House and Wilson deduce that because of her marital problems with Mark, Stacy is taking her anger out on House.

Outside House's home, House meets a young man who has been asking House to treat him. House makes a street diagnosis that he has AIDS. However, the man states his T cell count is fine. While they fight over House's cane with the man wanting to "marry his stick", the young man collapses and goes into anaphylactic shock.

After taking the patient to the hospital, Stacy tells House he has to treat the patient or face being sued for assault. While speaking with Stacy about their problems, Mark walks in on them washing dishes together.

House is convinced the patient has an opportunistic infection, but his team points out his T-cells are just fine and he has recently been tested for all the infections he might have had. House then surmises he might have an autoimmune disease - immune reconstitution syndrome. He recommends a chest X-ray to find the infection and steroids. Wilson points out the steroids might kill the patient.

Meanwhile, House cancels the pest control visit to Stacy's house to hunt for a rat he saw there himself. House tells Stacy that Mark is mad at her for her ability to walk because he felt the same resentment after his leg became disabled.

The team determines the patient's lungs are too damaged to find any old infections, and that the patient has been taking illegal drugs - including crystal meth and ecstacy. He also admits to having casual sex, often without protection with other HIV patients. The patient starts coughing up blood, some of which splashes on Cameron. Cameron has to be treated for the possibility she contracted HIV.

House manages to find the rat but is unable to kill it. He then consults Foreman about the rat's tendency to tilt its head.

House is intrigued by the coughing up of blood, which rules out immune reconstitution syndrome. House suggests they test the patient's illegal drugs for contamination on Cameron's suggestion. Cameron and Chase go to check the patient's hotel room. They find old photo bulbs containing beryllium which might have caused the symptoms. House orders a lung biopsy.

While performing the biopsy, Cameron finds out that the patient has brought his own drugs into the hospital.

House goes back to Stacy's house because he thinks the rat, which he has now called Steve McQueen, has a tumor. He treats cheese with medication to cure Steve.

Meanwhile, the patient starts suffering chest pain as the result of blood leaking into the space around his heart. However, instead of blood, the fluid around his heart is clear.

The patient's CT scans shows masses in the heart and lungs. Wilson thinks it is non-Hodgkin's lymphoma. Cameron wants to test for sarcoidosis. House thinks it is unlikely, but allows the test. The patient thinks Cameron is too uptight and some drugs might do her some good.

House goes back to Stacy's house to once again try to catch Steve. They discuss Steve's urine, which seems to show that Mark has been smoking, but Stacy admits it was her. She did the same thing after House was disabled. House apologizes for making her miserable. Stacy apologizes for causing House pain. At that moment, Steve is captured.

Chase drops by Cameron's apartment for a drink, but Cameron has been taking ecstacy and comes on to Chase. When Chase resists, Cameron is insistent.

Meanwhile, the patient's father has shown up and they get into an argument. They start talking about the father's cirrhosis. The father says that he doesn't care that his son is gay, but he is angry that the patient killed his own mother by being unable to give her one of his kidneys because he was HIV positive.

House guesses that Cameron and Chase had sex from the fact when they start talking about condoms she doesn't ask Chase if he always uses them.

Wilson tells the patient that he has non-Hodgkin's lymphoma and schedules a biopsy to find the tumor.

Meanwhile, Cameron and Chase discuss whether they want to pursue a relationship, and decide against it.

While House & Wilson are discussing Steve's health, they discuss parasites. Suddenly, House realizes the biopsy could kill the patient. He confronts the father to ask if they ever killed foxes, which they have. House realizes that both the patient and the father have a parasite, echinococcosis, the son in his chest and the father in his liver. The parasites form cysts and don't get detected in blood tests. They also mimic the symptoms of cirrhosis. When the father resists being tested because of his anger towards his son, House starts insulting the dead mother. When the father strikes House hits the father with the cane, releasing the parasites from a cyst and causing anaphylactic shock.

When Cuddy once again insists House see Stacy to avoid being sued, he agrees in order to see her again.

Cameron confronts the patient about his lifestyle. She feels he is trying more to punish himself rather than enjoy himself.

House confronts Stacy about not sleeping with Mark. Stacy denies it, but House insists. Stacy figures out House read her file. House insists that Stacy still wants to be with him, but she throws him out of her office.

The episode ends by showing that House has adopted Steve.