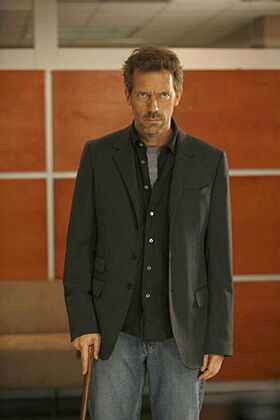 Informed Consent is a third season episode of House which first aired on September 19, 2006. The team struggles to diagnose a famous scientist who decides he is ready to die.

Dr. House's ketamine treatment has worn off and House is back to using his cane; but he doesn't want to talk about it despite everyone's concerns. House has to diagnose Dr. Ezra Powell, a 71-year-old renowned pioneer in the field of medical research who collapsed while studying rats. House puts Powell through diagnostic rigors, but the team is unable to come up with a conclusive diagnosis, and Powell's health continues to deteriorate. Becoming increasingly debilitated, Powell ultimately demands that the team stop the litany of medical tests and euthanize him. House strikes a deal with him and asks for one day to do tests on him.

The moral dilemma of whether to assist in his suicide and abide by Powell's wishes, or to ignore what their patient wants drives the team in very different directions. The team members have divergent opinions on the morality of helping Powell die. Cameron despises the idea of interfering with what Dr. Powell wants to do. Both Foreman and Cameron are opposed watching House put Powell to sleep, but Chase seems to have little problem. Wilson says that House has done it before "plenty of times" and House insists that it was only "to patients that [he] knew were terminal." In an example of Chase's ongoing character development, among the four, Chase is the most religious.

When House fails to diagnose Powell in one day, House agrees to give him the morphine dose. Instead of killing him, House puts Powell in a coma, so that he can do his diagnosis in peace. Cameron wishes not to partake in any more of House's plans until House directs Cameron to an article in an old medical journal to better understand Powell and his beliefs, which Cameron strongly disagrees with. However, during a colonoscopy, Powell's lung gives out and House is forced to intervene and notices that Powell has lost reflex capabilities in his right arm. In order to proceed with additional diagnostic procedures, House wakes Powell from his coma and finds that Powell has also lost sensation in his abdomen and right leg. House asks Cameron to obtain a skin sample for other possible diseases he may have. Cameron and Powell engage in conversation where Powell reveals that he feels things such as informed consent interfere with research and thus he does not let it stand in the way. Cameron slices a piece of skin off using his perspective as her solution, upon which Powell commends her for doing what she believes is right.

House ends up diagnosing Powell with amyloidosis. Chase also finds that it is of sub-type AA and therefore is a terminal illness. During the end scenes, Powell is seen crying in his hospital bed. The following morning, Cuddy comes into House's office to let him know that Powell passed away at 2:30 am, although declared stable at 2:00 am. House denies any knowledge of it and asks Cuddy if she would want to know even if he did. House then goes to Cameron, who is seen dressed in black, crying at the hospital chapel, suggesting that Cameron aided in the passing away of Ezra by euthanizing him. House tells Cameron that he is proud of her, and leaves.

Later, the daughter, Ali, tries to get in touch with House by leaving messages for him at the clinic.

Ali comes back to the clinic to see House to get more medicine for her father and to ask why he hasn't returned her calls. He intimates she is too young to call back right away, but she says she was only calling to thank him. However, as she leaves, she tells House she will be 18 in six months and he can call her back then.

The next morning, he finds a calendar on his desk with Ali's birthday marked in bright red.