It's a Wonderful Lie

Sửa đổi
It's a Wonderful Lie 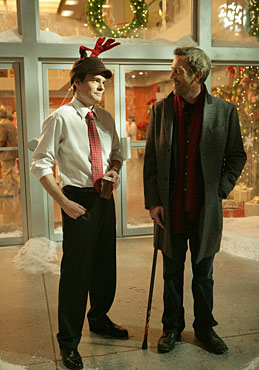 It's a Wonderful Lie is the tenth episode of the fourth season of House and first aired on January 29, 2008.

A young girl is climbing a rock wall while her mother Maggie belays her. The girl slips, but her mother has a hold of the rope. However, all of a sudden, the mother can't hold onto the rope anymore and the daughter drops to the floor. They realize the daughter has a broken arm, but the mother is no longer able to move her hands.

Taub is explaining to the rest of the team that the patient has been to several doctors who haven't been able to figure out what is wrong with her hands. House comes in and tears down the Christmas decorations. Kutner denies it was him who put up the decorations, but House figures out it was him by process of elimination. Kutner then asks to hold a Secret Santa. House tells them to MRI the patient's chest (the patient has had a double mastectomy) and then goes to speak to the daughter about her mother's drug use. The daughter denies the mother uses anything stronger than marijuana. House cross-examines the daughter about lying when the daughter denies ever doing it. House is surprised by the daughter's candor, however, when she is able to tell him that her mother has sex on her stomach to stop her various lovers from staring at the scars from her mastectomy.

House discusses the necessity of lying with Wilson. Wilson looks at the patient's scans and dismisses the possibility the cancer has recurred. However, the patient has had multiple sexual partners. The team has ruled out an STD, but House thinks it's related. Taub and Foreman go to speak to her sexual contacts, who denies doing anything wrong. However, the contact appears to be always thirsty and they diagnose him with the same thing the patient has. He admits to giving the patient Ecstacy and the doctors admit they lied about the diagnosis.

Taub comes back to report about the Ecstacy. House is not impressed that Taub is so straightforward and fearless around him.

They start treatment for Ecstacy overdose. All of a sudden, the patient starts complaining that the lights have gone off. They realize she has gone blind.

The Ecstacy turns out to be pure - no other toxins. Kutner is surprised that House has agreed to a Secret Santa. They choose names and start discussing the case. House orders an environmental scan, including the computer. Foreman thinks it is Kearns syndrome, but House dismisses it because of the lack of family history. He allows Taub to test for MS.

House tells Wilson the Secret Santa is designed to drive everyone apart. He thinks that buying the wrong gift proves how little they know about them.

Kutner and Thirteen come back with the patient's computer. Foreman thinks the paralysis might be a conversion disorder - something psychological. House decides they have to trick her mind. Thirteen opposes it, but they try to convince the patient's daughter to lie to her mother even thought he daughter believes her mother can't lie to her. However, the daughter won't agree.

Taub instead gives the patient a placebo and starts talking about the daughter with the patient while the rest of the team keeps the daughter distracted. However, the daughter mentions that her mother buys the best presents for the teachers who get along the least with her.

House tells Wilson that his name was the only one in the Secret Santa draw. However, the team has also figured this out.

The patient starts getting worse as her lymph nodes swell so much they cut off her airway.

House figures the swollen lymph nodes rule out a conversion disorder. House goes through her e-mail until Thirteen stops him. However, House has realized she might have sarcoidosis - she's been cutting back on physical activity. House gets his first present - an iPhone.

The team starts testing the patient, and figure that House bought himself a iPhone. However, House just stole it from Wilson. Thirteen tells the team to stop speculating who bought it - besides it was obviously House who bought it. However, they realized the patient has just gone deaf and is now bleeding out of her eyes. They have ruled out sarcoidosis but now fear she will bleed to death. House orders a bone marrow aspiration to determine why she isn't producing platelets.

Kutner asks why House got a present when he's his Secret Santa. He then gives House a present anyway.

Chase starts the aspiration by drilling into the patient's bone, but Foreman notes that it is smoking, meaning the bones are harder than the steel drill bit.

They can't find any hot spots that would indicate higher bone density, but Foreman doesn't think Kutner screwed up the test - he believes her entire skeleton has the same high density. Kutner comes up with a diagnosis for this symptom that House rejects until Kutner reminds House that any other cause of the bone hardening would be fatal. Taub tells the patient if they are right she will need a bone marrow transplant from her daughter. However, the patient objects to the daughter donating or even being tested despite the low risk to the daughter.

Taub finds a 5/6 bone marrow donor, but House wonders why the patient doesn't want the daughter tested - she's likely to be a perfect match. However, Thirteen comes in to say the transplant won't help - the blood test for what they hoped she had was negative. She then gives House a present. House agrees to tell the patient she's terminal, but tells his team to find out what the problem is. However, while they search Kutner points out there are dozens of terminal diseases that could account for the symptoms. The daughter comes in to ask for a marrow test.

The patient rejects the prognosis, but House tells her she knows that her daughter's marrow test will show they aren't related. The mother admits she didn't want her own kids to have the same genetic problems she had. The daughter's real mother was a drug addict and the patient promised not to tell. The daughter comes in to confront her mother about the prognosis and tells her it's not going to be okay.

House describes to Wilson all the expensive gifts he got from his team (a Watch from Kutner, a vintage L.P. from Thirteen and a second edition Arthur Conan Doyle from Taub). He then tells Wilson about seeing the daughter be honest - telling her mother she's going to die. He realizes the daughter did it because she cared about her mother. When they discuss the fact that things don't care about what happens to them, House gets an idea.

House starts singing "God Rest Ye Merry Gentlemen" to his team. He orders respiridone, an antipsychotic, and promises a Christmas miracle. The respiradone caused milk-filled tissue in her body to swell - there were breast cells elsewhere in her body that turned cancerous despite her mastectomy.

House's new team meets with Chase and Cameron for a party while House heads out alone.

A woman comes in complaining of a sore throat and House diagnoses her with strep throat. She worries about it being contagious, and House figures she's a prostitute worrying about passing it off to clients because she's wearing a St. Nicholas medal and, among other things, Nicholas was the patron saint of prostitutes.

However, the patient comes back. She has a rash on her neck. Her lips also look like she has lipstick although she's not wearing any. The only disease that would cause it would be from an equine animal, like a donkey. House quizzes her about it, suggesting she contracted it from participating in a donkey show, and she admits to having recent contact with either a donkey or mule. House prescribe an antibiotic creme.

Later, House goes to see the patient - she's playing Mary in a nativity play and appears sitting on a real mule.