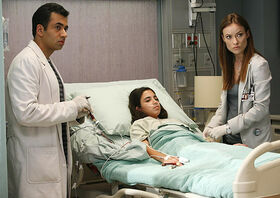 Joy is a fifth season episode of House which aired on October 28, 2008.

The team takes on the case of a dreary middle-aged man who has been experiencing unexplained recurring blackouts and time lapses. With possible diagnoses ranging from a stroke to a concussion to toxins from the consumer products he has been testing for work, they soon find that the man, who is raising his 12-year-old daughter on his own, has been experiencing intense sleepwalking spells. As the team tries to find out what he could be doing during his sleep to make himself sick, his condition continues to deteriorate and his daughter also falls gravely ill. Meanwhile, House finds out Cuddy is going to adopt a baby that is due in two weeks. But when Cuddy meets the birth mother in person and notices a strange rash on her arm, Cuddy brings the mother to Princeton-Plainsboro where her condition worsens. Cuddy must take on the case as both a doctor and a potential mother, and she and the team are faced with a heart-wrenching decision that could risk either the birth mother’s or the baby's life.

A father is having a series of perceptual and temporal distortions - he's having blackouts.

Cuddy comes to House with the case, being ready for all his explanations about what the blackouts are being caused by. House realizes from her demeanour that she's been assigned a birth mother for adoption of the child. He thinks the mother probably has some sort of drug problem.

The team starts a differential, and House starts a pool on when Cuddy will change her mind about the adoption. Taub goes forward with the differential. Thirteen thinks it might be exposure to toxins because the patient tests consumer products. Kutner chooses 7-14 days for the pool.

Taub and Thirteen do the environmental scan. Taub notices the house is immaculate despite the house has been lived in for six years and there is a teenage daughter but no wife. Thirteen finds what looks like mold.

Thirteen tests the daughter to be sure she isn't sick, and finds out the father stays at home and the daughter only goes back and forth to school. The mother died when the daughter was four. The daughter tells Thirteen she isn't particularly affected by her mother's death.

Foreman and Thirteen find the patient trying to leave the hospital. He insists on having to leave. Foreman realizes hes sleepwalking.

Foreman wants to know what the underlying cause of the sleepwalking is. Kutner thinks it is narcolepsy or an environmental reaction. The mold can't be to blame. House realizes that the patient leaves his house when he is sleepwalking.

Cuddy meets the birth mother, a pretty blonde girl. Cuddy thinks about calling the child Joy. The mother tells Cuddy that she chose her because she's a single mom and successful. Suddenly, Cuddy notices a rash and the mother complains of joint pain. The mother denies using drugs since she found out she was pregnant.

Thirteen and Taub are watching the patient. The patient is asleep and starts walking. They go to follow him.

Cameron examines the mother at Cuddy's insistence. The mother is impressed that Cuddy is in charge. Cameron comes in with negative blood tests, but Cuddy admits the mother anyway.

Cuddy goes to see House about the mother's rash. Suddenly, he dumps baby vomit on her clothes. Cuddy doesn't think much of it and she's not discouraged from adopting.

The cocaine explains many of the symptoms, but not why he would start sleepwalking or memory loss. House thinks it is an impurity in the cocaine and tells the team to get a sample from the dealer.

Cameron is doing an ultrasound on the baby, which shows pulmonary hyperplasia - underdeveloped lungs. It is serious, but they can treat it.

Thirteen is explaining to Taub how she knew the woman wasn't a prostitute. They make a buy, and Thirteen tastes it and then asks for the cheap stuff she sells to clients who are already hooked instead of the pure stuff she sells to first timers.

House comes in, to once again, try to disuade Cuddy from adopting. He doesn't think Cuddy is ready. He breaks things in her office to show her what having a kid is like. She throws him out.

The cocaine was cut with milk powder. House thinks it might just be lactose intolerance, and tells the team to treat him for the allergy.

Cuddy goes back to treat the mother. Suddenly, the mother's heart rate starts to climb and she starts bleeding. Cuddy calls for blood for a transfusion.

The mother had a placental abruption. House recommends delivery, but the baby's lungs aren't ready. Not delivering the baby may result in the mother's death, and House tells Cuddy that they should deliver the baby. However, when Cuddy agrees, House tells her that it would be safe to keep giving the mother more blood. House thinks Cuddy agreed so quickly because she wasn't ready for a baby.

House goes to Wilson to talk about Cuddy. Wilson thinks House doesn't want Cuddy to adopt because House is attracted to Cuddy and doesn't want her to further develop as an adult.

Giving up cocaine results in the patient improving. However, Taub notices that the patient is now sweating blood.

The sweating blood is not the result of the cocaine and the team starts a new differential. House orders a bone marrow biopsy to test for leukemia.

Cuddy tells the mother to wait until the baby's lungs develop. The mother wants to proceed with the delivery because she doesn't want to risk her life. Cuddy reminds her that she chose to go to full term in order to not make the same mistakes her own mother did and give the baby a good life.

As they start the biopsy, Taub notices the patient's legs are darker than normal. Kutner realizes it can't be leukemia.

The patient's kidneys have failed, and they can't put him on dialysis because his blood pressure is too low. House thinks it might be vasculitis. However, the patient will still need a transplant and as a minor the daughter will need a guardian ad litem because her father is disqualified. House asks for Cuddy, but the team says she's busy.

Cuddy is in the operating room with the mother delivering the baby. House goes to the room and tells Cuddy to do her job. Cuddy tells him to get out of the room, which he refuses to do. They finish the cesarean section, but the baby doesn't breathe right away. Cuddy starts tearing up and yelling, "Cry, Joy, Cry!", afraid that the baby won't live. Suddenly, the baby starts crying. Cuddy cradles the baby in her arms. House once again reminds her about her job.

Cuddy goes to see the daughter. House is pressing for the transplant. The daughter agrees to it, but shows no emotion. Cuddy gives approval, but House won't do it - he realizes the daughter is sleepwalking too and has the same disorder as her father.

House asks Wilson what genetic disease it could be. While Wilson discusses why Cuddy won't have post-partum depression (because she hasn't given birth), House gets an idea.

He goes to see the patient and the daughter. He tells them they will recover, but realizes that they are anhedonic when they don't respond. Thirteen thinks it is depression, but House realizes they are friendless and they are indifferent to each other. Foreman thinks it is schizophrenia, but that is only common in Europeans. House asked them what their real names are, and they admit they are Arabs. They have Familial Mediterranean Fever, which only occurs in persons from certain ethnic backgrounds. They may not recover, because the treatment is less successful after the patients start sweating blood. Foreman also points out that if House is wrong, the treatment will destroy the father's kidneys. House sarcastically hopes he is right.

They start treatment. The patient wakes up and starts smiling, as does his daughter.

Cuddy goes to see the mother to tell her the baby is fine. The mother is ashamed of her behavior and calls herself a loser. She calls Cuddy with the baby the most beautiful thing she's ever seen. However, the mother has realized she wants to keep the baby. Cuddy tries to talk her out of it, but can't. The mother hopes the baby will change her life.

The patient and his daughter play and laugh. Cuddy goes back home to sit on the floor in the nursery, eyes red from crying. House comes over to see her. Cuddy tells her this isn't the time to gloat. House tells her that there will be another baby, but Cuddy says she can't go through it again. He tells her she would have been a great mother. Cuddy gets angry with him, pointing out that when she couldn't conceive a child, he told her she would suck as a mother, but after she lost a baby, he told her she'd be a great mother. She asks him why he has to negate everything, to which he responds, "I don't know." After a moment of silence, they kiss each other passionately. House says goodnight and leaves.