Joy to the World

Sửa đổi
Joy to the World 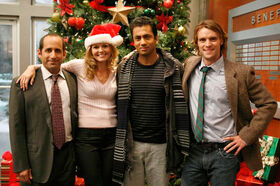 Joy to the World is a fifth season episode of House which first aired on December 9, 2008. House and the team encounter a teenager who collapsed during her high school Christmas program. They soon find the troubled teen dealt with more than her share of bullying at school, and as her condition continues to deteriorate, the team must delve deeper to get to the bottom of her mysterious illness. Foreman continues to work with Thirteen on the Huntington's disease drug trial, and their relationship progresses when he learns a valuable lesson from her. House gives a clinic patient an unbelievable holiday gift and keeps the team guessing about who may have sent him a particularly thoughtful Christmas present. Meanwhile, Cuddy receives an unexpected gift of her own.

Teenage girls plot backstage to break up a Christmas pageant. As they come on stage however, they abandon one of them to sing alternate lyrics insulting one of the teachers. She stops, but starts to feel faint, vomits and collapses.

The patient is 16 and is suffering from hallucinations and liver failure. Foreman is working on his clinical trial. The team finds a present for House. He tosses it in the trash, but Taub retrieves it - it's an antique medical text. House throws it away again. He thinks the patient's friends may have slipped her drugs.

Kutner and Chase confront the patient's classmates who admit to giving her hallucinogenic mushrooms.

Foreman is doing an examination of Thirteen. She smiles at his jokes and leaves behind a gift - a day at the spa.

Taub and Kutner retrieve the mushrooms. However, they also find painkillers in the patient's locker.

Cuddy confronts the patient about using the painkillers. She also tells her about her time in high school. The patient is overweight and her classmates are picking on her.

The parents tell Cuddy that the patient's behavior changed after she hit puberty - she became much more secretive.

Taub and Kutner ask Wilson why House threw away the gift. Wilson appears to know something about the gift and after misleading them, admits he gave it to House last year.

Cuddy pages Kutner and Taub. The patient has a rapid heartbeat and crackling lung sounds.

The patients hallucinations were obviously from the mushrooms, but they don't explain the liver failure and lung problems. Taub tells House to tell Cuddy how she feels about her, knowing that the present wasn't from Cuddy. House realizes Taub knows that Wilson gave him the gift. House orders Taub to get a stool sample.

Wilson wonders why House didn't open his present. Wilson accuses him about being upset about being alone at Christmas. He tells House to be nice to people, but he realizes he's not capable of it. House realizes it's a trick to get him to act nice.

Thirteen goes to see a Huntington's patient who left the clinical trial. The patient doesn't like Foreman because he wouldn't do anything about her nausea and told her to get over it. She didn't want to be his guinea pig anymore.

Taub thinks it might be tuberculosis. House agrees and orders treatment. Taub sees House put on a lab coat and go to clinic voluntarily. House acts nice with the first patient and does a proper examination and tells her she's pregnant. She didn't know. At that point he starts insulting her for being so stupid not to recognize the obvious symptoms. She says she is a virgin, but House doesn't believe her.

House's patient starts having a seizure, but the patient's neck isn't stiff so it can't be from tuberculosis.

It appears the patient needs a liver transplant. House wonders why Cuddy is so interested in the case. He thinks it is because of some other similar girl she knew in high school. Kutner thinks it might be a severe mold allergy. House orders an allergy test and anti-fungals.

Thirteen speaks to Foreman about the patient who quit. He admits that he told the patient to get over it. He refuses to apologize. They get into a fight, but Foreman says the only way he can help her is to keep her on the regimen. Thirteen accuses him of being just like House.

The clinic patient comes back with her fiance. House denies that they she could have gotten pregnant any other way. She asks for a paternity test.

Taub and Kutner do the test. Kutner wonders who brought her the homework and she says it was one of her athletic male classmates. Kutner chases after him and tells him he thinks he visited her out of guilt and wonders what he did to her. Taub thinks Kutner is taking out his own frustrations on the kid. The jock admits they used to be friends but he had to stop when the others made fun of him. He tells Kutner that the patient used to drink. They realize alcohol could account for the symptoms.

The patient denies drinking for six months, but admits she used to. Cuddy presses her and tells her that although she's good at work and school, she's bad at relationships.

House's next clinic patient has asthma. He suspects she's not using her inhaler right. He's absolutely right - she points the inhaler at her neck.

Cuddy tells House that she doesn't think the patient is being honest and either wants to die or wants attention. He orders treatment for the seizures because he won't need parental consent.

The pregnant clinic patient comes back. House is shocked with the results.

Foreman is working hard on his clinic trial. He talks to the other doctor on the trial about the patient who dropped out. She tells Foreman not to treat the patient as people - they have to be treated as numbers. She picked him because House knows that too.

The patient's heart gets slower and she goes into distress.

House comes back to the pregnant patient. House tells him that the fiance isn't the father, but she didn't cheat. She's the first human case of parthenogenesis - virgin birth from an unfertilized egg with only maternal DNA.

House wants to tell the team about the clinic case, but they want to talk about the patient. House thinks it might just be delerium tremens. However, some of the signs point to leukemia. They consult with Wilson who recommends chemotherapy. House want to confirm. Cuddy wants to treat her right away, and House wants to know why she's so involved. Wilson says she's probably going to die - her heart, liver and brain are too far gone and the transplant committee will never approve her.

Foreman goes to see the patient who dropped out. He tells her a new trial will result in less nausea and offers to move her to the other trial.

Cuddy goes to do other differentials with House. He still wants to know why she's so involved. He also admits to faking the parthenogenesis to keep the clinic patient with her fiance (the fiance wasn't the father). Suddenly Cuddy thinks of something - eclampsia.

Cuddy goes to break the news to the patient. The parents know it's related to pregnancy. Cuddy realizes the patient knew. The patient was planning on an adoption, but the baby was born outside the hospital and she abandoned it. Cuddy breaks the news that the lung and liver damage are permanent and she's going to die. Cuddy goes to retrieve the dead baby in an abandoned house, but finds someone living there and that the baby is still alive - the people living there found it and took care of it. Cuddy tells them the baby needs treatment and the woman taking care of it agrees to give it up.

Kutner tells Cameron and Taub the patient could not get a transplant, but the baby seemed healthy. Taub attempts to talk to Kutner about it because he seems upset, but he says he has to leave. Kutner goes to a man's house and apologizes for picking on him during high school.

The baby gets put up for adoption, and Cuddy says she's going to be the baby's foster mother and then try to adopt her. House wishes her a merry Christmas.

Thirteen finds Foreman at his clinic. She heard the patient is back on the trial. Thirteen apologizes for comparing him to House. She says they should go to the Christmas party. They embrace and kiss instead.

Eclampsia is fairly common, occurring in about 1 out of every 2,000 live births. The diagnosis was complicated because had the doctors known of the pregnancy, they would have noticed preeclampsia (high blood pressure and protein in the urine), a condition that will put doctors on the alert to watch for eclampsia later on (although only a small portion of preeclampsia cases develop into eclampsia).

While Wilson is misleading Taub and Kutner, he fabricates a story of an "Irene Adler" also mentioning how House falls for her. (Sherlock Holmes has deep rooted feelings for Irene Adler in the book "A Scandal In Bohemia")