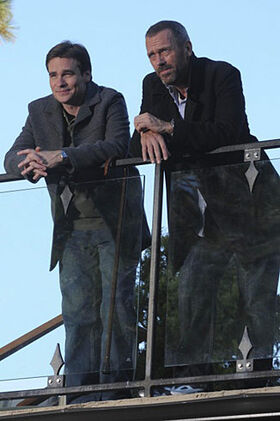 Known Unknowns is a 6th season episode of House. After a wild night out, a teenage girl (guest star Annabelle Attanasio) is brought to Princeton-Plainsboro Teaching Hospital with severely swollen appendages. The team must work to diagnose the young girl, who is less than honest about what happened the night she fell ill. As her condition worsens, she becomes unable to distinguish fact from fiction and she starts to lose blood faster than the team can transfuse. Meanwhile, Wilson, Cuddy, and House spend a weekend away from the hospital to attend a medical conference, but things don't go as planned when House's private investigator, Lucas Douglas, returns. House confesses his feelings for Cuddy to Wilson who says that she is better off without House. Chases strange behavior because of killing Dibala leads Cameron to believe that Chase is having an affair.

While a young woman recalls her night with a rock band, the friends notice that her left ankle has swollen up. She suddently notices her hands have swollen up too, and she collapses on the carpet.

House is complaining that Foreman has e-mailed him an x-ray that he can't read on his cell phone screen. Wilson reminds House that they are going to a medical conference that afternoon, but House doesn't want to go. Wilson reminds him that as a term of his release, they have to stay together. House tells him that he will tell Foreman he can't deal with the new patient, but he's not going anyway.

House arrives at the hospital where the team explains the patient has severe edema, seemingly because she has the joints of a much older woman. House figures she just has RHABDO (Rhabdomyolysis) from trauma, she said she jumped off a roof into a pool. The rest of the team have other theories, but House insists. Chase agrees to perform all the tests.

Chase confides in Foreman that Cameron thinks he's cheating on her.

House goes to get Cuddy to agree to release the patient, and realizes she's going to the medical conference too. He says he's going as well but she's checked and his name isn't on the attendee's list.

House goes to Wilson to tell him he's going to the conference. Wilson realizes House knows Cuddy is going, and tells him to be ready in two hours.

Chase comes in and tells him he can't leave and that the patient can't have RHABDO because there is no sign of muscle crush. However, House goes to give the patient a pair of drumsticks and asks her to play along. She does for a while, but soon becomes unable to move her arms. He realizes her potassium was too low the previous night to climb stairs to jump into the pool and tells Chase to get a better medical history and that the patient is a liar.

They question the patient and she admits that instead of staying with the rock band, they followed a comic book artist around for several hours, including following him to a restaurant. Cameron goes to get food from the restaurant, but they note no-one else got sick. Foreman realizes that she ate the whole meal despite being thin. He figures he might be bulimic. They go to do a barium swallow.

Wilson and House go to pick up Cuddy. Wilson tells him to ask her out, but House has a plan. Cuddy shows up with Rachel.

Cameron asks Foreman about Chase. He tells her to talk to Chase and that Chase is not having an affair. The barium swallow is negative. However, when the patient's parents show up, she starts to crash. They realize she is bleeding into her heart.

They call House, who figures it might be a toxin. Cameron goes to do an environmental scan and House says get a better medical history.

House is masquerading as a "Dr. Perlmutter" to get into the conference.

Foreman questions the patient and her friend, and they soon realize that the patient is making things up.

Cameron catches up with the comic book artist. He remembers the patient and her friend, and makes a pass at Cameron.

Foreman realizes that she is bleeding into her brain, which has affected her thalmus and her memory. He also finds out that there was a gap when the patient went to "get ice" that the friend can't account for.

House and Cuddy meet at a costume party and start dancing. They recollect about how they first met. It was Cuddy's third day at school. She was at the book store and House figured her out in about thirty seconds. They talk about who approached whom, and how they tracked each other down at a party, and it's presumed that they slept together after the party. House said he was going to call Cuddy, but that was the day he found out he had been expelled from Hopkins and saw no point in pursuing anything. Cuddy, seemingly surprised and flustered by the revelation, leaves to go back to her room.

Wilson is woken up by a call telling him his patient has passed away. House said he told Cuddy he was always interested in her, and she just walked out. House finds out that Wilson's talk is about euthanasia.

Chase and Cameron try to track the patient's movements on security. They realized she went back for a journal that the comic book artist left behind so she would have an excuse to meet him.

Wilson and House go down to the lake to discuss his paper, and House tells him not to say it openly - it will ruin his career. Wilson says he has to say what he thinks is right, just like House would. House tells him that hasn't worked out for him personally.

Cameron and Chase go to see the comic book artist and confront him and ask to search the room. He shuts them out. Chase tells Cameron the artist would never risk his wife for a one-night stand, and follows up that he isn't having an affair either. Cameron doesn't believe the artist and realizes the patient's symptoms are explained by an overdose of roofies.

Wilson goes to see Cuddy and Rachel. They talk about House. She says she can't rely on him, especially now that she's a mother.

However, Foreman rejects Cameron's diagnosis because the patient is now bleeding behind her kidneys. Foreman is transfusing red blood cells, but the patient keeps bleeding out. Cameron thinks it is a toxic reaction and suggests using phenobarbitol as a truth serum. Chase accuses her of being angry at the comic book artist and taking it out on him. He want to call House, but Foreman says House wouldn't go with anything safer.

House is dipping into the minibar despite the buffet downstairs. They talk about Wilson's speech again. He deflect and tells her to go see Cuddy - she needs a babysitter. Wilson realized that House has drugged him with the minibar supplies, and just before he passes out he tells House that Cuddy is better off without him.

They prepare to give the patient phenobarbitol. After she is dosed, she starts talking about the comic book artist. However, her heart rate is increasing. She admits she realized he gave her a tablet and then started touching her. The father wants to kill the artist, but Foreman has been monitoring her pericardial blood flow and realizes she is still lying.

House goes to see Cuddy and wonders why it is so quiet with Rachel in the room. House offers to babysit, but Cuddy says Rachel is in day care. However, he then hears Rachel cooing. He walks in and finds her with Lucas Douglas. They talk about how awkward the situation is and House agrees to leave.

Wilson finally comes to and finds the phone ringing. It's Foreman looking for House, but House isn't in the room. Foreman updates him about the bleeding problem and tells him the comic book artist has a dog so they are treating for ricketsia. Wilson realizes he is late for his talk.

However, House is giving the talk instead, and he's giving Wilson's original talk. Wilson is still looking for his pants. House is obviously taking the heat for Wilson's talk to save his career. Wilson finally shows up an realizes what has happened. House then adds something - that he never does anything less than his best. Although there are many questions, House dodges them all. Wilson finally realizes that the crowd still thinks House is Dr. Perlmutter.

Wilson catches up with House and tells him about the ricketsia. They then talk about House's deception. House wonders why Wilson is angry with him. He thinks that Wilson is upset about his patients dying all the time. As he's telling Wilson how guilt is affecting him, he thinks of something and calls his team.

House has realized the blood transfusions are killing her. She got vibrio vulnificus from oysters. The patient denies it, but she's lying again. Chase wonders why no-one else is sick, but House has an explanation - she's more succeptible because she has haemochromatosis as well. Because they thought she had bulemia, she got iron supplements, which made it worse. She needs treatment for the vibrio and chelation for the haemochromatosis.

Cuddy, Wilson, House, Lucas and Rachel have dinner together and House asks how Lucas and Cuddy got together. Cuddy hired him to see who was skimming money from accounting. House wanted to know why they kept it secret. She says she likes to keep her private life private. Lucas starts rattling off about all their problems and can't shut up. He offers to buy House a ginger ale and House accepts.

The patient starts to improve. However, her parents are leaving her to her own devices again. The patient finally admits that he never knocked on the artist's door and merely left the journal next to it.

House watches Cuddy and Lucas play with Rachel. He seems resigned to the fact and wants to raid the minibar again. Wilson tells him that House often needs to hear that he's right from someone else and forgives him for giving the speech. It turns out Perlmutter was stuck in Toronto and House won't be recognized because he hasn't been at a conference in fifteen years.

Cameron and Chase start talking. He once again denies having an affair. Cameron offers to help because she knows, whatever it is, its eating away at him. Chase admits to his murder of President Dibala.

The title of this episode comes from a statement by Former United States Secretary of Defense Donald Rumsfield. The "known unknowns", according to Rumsfield, are things that people know they do not know.