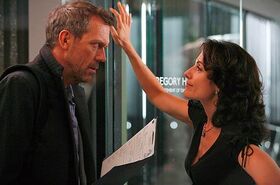 Let Them Eat Cake is a fifth season episode of House. A fitness guru known for her "natural" lifestyle collapses while shooting an infomercial. Meanwhile, Thirteen participates in a clinical drug trial for Huntington's disease led by Foreman; Kutner operates an online medical-advice clinic under House's name; and Cuddy moves into House's office while hers is being repaired, much to House's dismay.

During a commercial shoot, a fitness trainer is working with one of her customers. All of a sudden, she collapses and falls down the stairs of the stadium.

Cuddy brings the case of fitness trainer to House. He agrees immediately, which makes Cuddy wonder. As they leave the elevator, she tells him that she's going to use House's office while hers is being repaired.

Foreman and Thirteen are working on the clinical trial. House does a differential with Taub and Kutner. Taub thinks it is anabolic steroids, but Kutner believes her pitch that she is in an all natural program. Cuddy calls out that the patient tested negative for steroids. She gets in on the differential and House leaves the office. Kutner thinks it is asthma set off by exercise. House orders them to do a stress test despite the patient's broken ankle from the fall.

Thirteen is looking at the other Huntington's patients in the trial.

They do a stress test with a hand treadmill. The patient is enjoying herself as she hasn't had a chance to exercise. All of a sudden her face turns red and she collapses. Taub rules out asthma.

Foreman is testing Thirteen's reflexes. She's upset that she got into the drug trial only because of Foreman. He says its because she has Huntington's. He tells her that the test shows the nerve degeneration has already started.

House finds Cuddy playing with his big red ball. They split up the desk. Taub and Kutner bring the test results to House. Kutner thinks it's a tumor. House tells them to scan for it.

Kutner tells Taub he's working on an online second opinion clinic, and that he did it under House's name. Taub tells Kutner he has two days to live (he'll tell House), unless he cuts Taub in on the proceeds. They find something in her stomach - something that points to her not being "all natural" - she had gastric bypass surgery.

Taub and Kutner report to House. Cuddy asks them to leave the office. House asks very loudly where his balls are. Kutner thinks it might be nerve damage from diabetes, but House thinks it would have shown up before. House goes to see Foreman and Thirteen too. Foreman tries to throw them out, but Thirteen wants to participate. Kutner thinks it might be poor nutrient absorption from the bypass surgery, causing SEBO.

Taub goes to the patient, who justifies her surgery and the way she sells her diet program. He tells her to give him a stool sample.

Wilson confronts Cuddy about using House's office. He accuses her of trying to get close to House.

Kutner's side line is getting him in trouble - a patient is threatening to report him to the licensing board.

House finds the test proves it isn't SEBO despite his test of seeing whether the stool will float in water. He tells them to test for sleep apnea in the sleep lab. The patient escapes the sleep lab and goes to the treadmill. She says her ankle doesn't hurt, but Taub notices her leg is bleeding and she's not feeling pain.

The sleep lab results rules out apnea. Cuddy has spilled hydrogen sulfide in the office, and then leaves.

Thirteen returns, but Foreman comes to tell her to be more prompt to her appointments. House wants to do an NCB test to test her nerve impulses. The patient admits to being a hypocrite, but justifies it by making her clients healthier. Taub asks for her arm, but she has trouble lifting it. Taub realizes it's her muscles that are the problem and cancels the test.

Kutner runs into his second opinion patient in the elevator, but he and Taub try to waylay her on her way to House. Taub tells House that it might be myesthenia gravas.

They head off to Cuddy's office. House thinks it might be heavy metal poisoning. He then breaks Cuddy's private toilet. He orders chelation therapy for the patient.

Thirteen finds Foreman in her apartment. He wants to know why she keeps missing appointments. However, he finds she has been doing everything she's been told. She just doesn't want to hang out in the waiting room with the other Huntington's patients. We see a flashback - Thirteen avoided going to the hospital with her mother when she had to be institutionalized. Her father tells her she will regret it.

The chelation doesn't work. The team is sitting on the stairs because Cuddy has thrown House out of the office. Kutner's pager goes off. Taub thinks it might be Guillain-Barre syndrome set off by the gastric bypass. House orders plasmaferresis.

Kutner's second opinion patient is having a seizure. Kutner thinks she is faking, but Cameron notices she is bleeding from her ear.

Kutner starts a differential on the second opinion patient with Cameron and Chase. They tell him to ask House. However, Kutner comes up with a good idea - a tumor causing peritoneal plastic syndrome.

Wilson points out that House's plan to take over Cuddy's renovations will keep him in her office longer. He tells him to ask her out.

The patient's clients show up to visit her. They confront her about the gastric bypass. She's having hallucinations.

Thirteen leaves the differential to go to her appointment, but thinks it might be CMS lymphoma. Cuddy tells House to test for CMS lymphoma and other possible diagnoses before trying a brain biopsy. House tells his team to do the tests. He tells Cuddy he thinks she's doing it because she's hot for him. She tells him that he's always in her office because he's hot for her. However, they break up after House touches her breasts.

Thirteen is in the clinic waiting for Foreman. She wants her appointment changed. Foreman tells her he can't and to get to know the other patient. We flash back to when Thirteen's mother was leaving. Thirteen stayed in her room. Finally, Thirteen goes to talk to the other patient and help her with her coat.

The tests are negative. The patient asks for chocolate cake. She's sure it must be a brain tumor and confronts Taub about not telling her the truth. Taub tells her it might be a prion disease, which might be terminal. She asks for cake again.

CMS lymphoma is ruled out. House asks Taub about his affairs. Taub says he enjoyed it, but it felt hollow. House thinks he's lying. Taub tries to stop House from doing the biopsy, but House threatens to fire him. When they arrive in the patient's room, they find her doing flexibility exercises.

House is wondering why the patient got better. Taub tells her about the chocolate cake. House leaves the room to see the patient. He brings another cake. The patient is not feeling well again. He diagnoses a form of porphyria that can be treated by a high carbohydrate high glucose diet. When she was chubby, she was treating the problem herself. Instead of going back to her old diet and reversing the bypass surgery, she asks for drug treatment instead.

Kutner and Taub talk about how superficial the patient must be as they see the second opinion patient. She has had a respiratory arrest and died.

Cuddy shows Wilson her new office. Wilson remarks how the desk has character. Cuddy realizes it isn't what she ordered - it's the desk she had from medical school. She realizes House had it installed.

Thirteen comes to see Foreman. She admits the other patients reminded her about her mother. She admits that she wanted her mother to die. Her mother was always yelling at her because of the Huntington's. She hated her mother anyway and never said goodbye to her. Foreman comforts her.

Taub and Kutner go to the morgue. House finds them there. He calls them idiots and frauds as well as killers. Suddenly, House starts resuscitation and the patient arises. It soon turns out that it was all a scam on Kutner to teach him a lesson. The patient was acting all the time. House is going to let them keep up the website and share 50% of the profits with him.

Cuddy finds House with the second opinion "patient". She leaves his office.