Lines in the Sand

Sửa đổi
Lines in the Sand 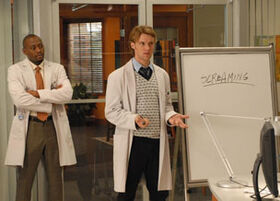 Lines in the Sand is a third season episode of House which first aired on September 26, 2006.

A young autistic boy starts coughing, then screaming. He is taken to Princeton-Plainsboro for examination.

House takes the case, but Foreman thinks he's just screaming because of his autism. Cameron is astounded that House believes the parents when they say something is wrong, but House notes that his parents have been caring for him constantly. He orders tests and an environmental scan. He jokes about how difficult it will be to perform a scan on an autistic young boy.

House then goes to Cuddy to demand she put back his blood stained carpet. He tells her he won't use his office until the carpet is returned. When Cuddy resists, he starts shouting "Attica! Attica!", but Cuddy remains unmoved.

As they go to test the patient, his father tells them to wait until he finishes a level on his video game. When they don't the child goes wild.

Chase and Cameron go to search the patient's house. They discuss why the parents would give up their lives to care for their son.

All the tests are normal, and House is working in the clinic, with his team, to stay out of his office. Cuddy comes in and tells House it isn't going to make her change her mind. House orders his team to take a fecal smear. However, as they go to do the test, the patient starts suffer from a pleural effusion.

House retreats to Wilson's office, but as he orders an echocardiogram, Wilson comes in to find them there. He stops House from playing with his things. House asks why Wilson never throws anything out.

Once again, the patient is frantic while Foreman performs the echocardiogram. House retreats to a shared office space. Foreman finds and confirms that the patient has a conduction abnormality. At that moment, Cameron realizes House actually does want his carpet back. Cuddy comes in and throws them out of the shared office. House orders Foreman to do a biopsy, but Foreman tricks Wilson into doing it. Once again, the patient is frantic during the procedure. House manages to anesthetize the patient by taking some of the anasthetic himself. The patient follows suit and is knocked out. The parents are impressed. House says it was only the child imitating him.

House, too, wonders why the parents have invested so much into their child. He expresses envy about how the child doesn't have to worry about social graces. The biopsy is negative, but the cells are from his liver although they biopsied his lymph nodes.

House retreats into Wilson's office again. Cameron thinks the misplaced liver cells might be a sign of cancer. If the cells were damaged, they could travel through the body. However, the patient's liver tests as normal. The only explanation seems to be cirrhosis, but the only way he could get it would be for his parents to give him alcohol. Wilson comes back to his office, and retreats himself. House thinks the parents don't want to deal with their son anymore. House tells Cameron his parents love him unconditionally.

Wilson asks Cuddy to give House back his carpet. However, she refuses.

House takes up residence in Cuddy's office. House asks Foreman for the results of the stool sample, but it's normal. Cuddy comes in and confronts House, but gets him to leave when a phone call informs them that the patient has been taken to cardiac ICU.

They manage to stabilize the patient, but now the patient's liver is failing. House is concentrating on what the patient might have put in his mouth. He orders Chase to take samples from the patient's house.

Foreman finds jimson weed, which would explain the symptoms except for the screaming. However, if he doesn't have it, the treatment for it will make him worse. Testing him will take more time than the patient is likely to live. House goes to the patient and asks him what he ate while holding up the pictures he uses. The patient grabs the picture for the sandbox and, at the same moment, his eye rotates out of its socket.

House goes to the chapel next. They start talking about why the eye rolled back, but this is also consistent with jimson weed. Foreman thinks it might be a metastasized microtumor, but that would mean they missed three of them. If Foreman is right, it would mean removing the patient's eye.

However, just before the operation, House realizes that the lines the patient has been drawing are worms in his eye - the only way the patient could communicate the symptom. He has a parasitic infection which can be treated.

Wilson tells Cuddy that House may have Asperger's syndrome, a mild form of autism. She doesn't believe him, but he tells her that House took this patient because he reminds him of himself. However, after he convinces Cuddy, he goes to House and tells him it was all a lie - he really is just a jerk. House realizes that the patient will never feel the happiness that normal people feel, and the parents must now feel bad that they must go back to taking care of him. However, as the family is set to leave, the patient hands House his beloved PSP and makes direct eye contact with House. His parents are ecstatic.

House returns to his office and his old blood stained carpet.

Avoiding his own office, House is faced with a bevy of inane cases.

The first patient brings in one of her rarely excreted feces for a doctor to look at.

The second patient came in because his serious back pain has gone away - he's feeling great.

The third patient is Ali,a 15 year old girl who thinks she too has a common cold. House starts to examine her, and she takes off her top, exposing her breasts, ostensibly so that House can use his stethoscope. Foreman bursts in on them accidentally.

Cuddy confronts House about Ali (she's left 15 messages for him) and tells security to keep her out of the hospital. House doesn't think she's dangerous. He shouts "You can't stop our love!" although he makes it clear he isn't interested in her. Later when House goes to his motorcycle, he finds Ali sitting on it. They start talking about age of consent laws. He reminds her of their age difference - "over ten years". Cuddy catches them and makes Ali leave, threatening her with arrest if she catches her again. She warns House about Ali.

Cuddy tells House Ali is locked in her office. House goes to see her to disuade her from coming after him. He gives her a spiel from Casablanca. However, as he examines her face, he "realizes" she has a fungal infection that is causing a lack of inhibitiion and judgment. She accepts the explanation.

Dr. Simpson: This is an appendectomy.

House: (Taken aback but unable to admit his error) Like I said, don't touch his eye.

Community content is available under CC-BY-SA unless otherwise noted.