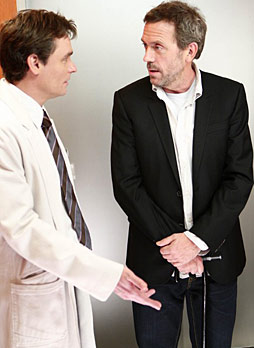 Living The Dream is a fourth season episode of House which is scheduled to air on May 5, 2008. While House is watching his favorite soap opera, he starts to think that one of its male actors is suffering from a serious medical condition. No-one will take him seriously, so House goes to extraordinary lengths to get the patient to Princeton-Plainsboro.

A soap opera actor steps into his limo, but the driver isn't following directions. The actor finds himself locked in, and House driving the limo.

Meanwhile, a hospital accreditor surprises Cuddy with an inspection visit. House arrives at the emergency entrance with the actor. He tells him he has a brain tumor. The actor realizes that House is the one who has been calling his publicist. When the actor screams for help, House screams for a wheelchair. He then starts describing the actor's symptoms - difficulty reading from the teleprompter. House promises to do one test and let him go. The actor agrees.

Cuddy is briefing the doctors and tells House's old team (Cameron, Chase and Foreman) to keep an eye on House. Foreman denies that House has a case. House is testing the actor's vision. House pumps the actor for inside info on the soap opera. The actor is sick of the plot twists. Foreman finds House and House realizes that the hospital is being inspected and Cuddy has sent Foreman to keep an eye on him. House confirms the actor has problems in his visual field. However, Foreman realizes House is lying about the results and tells the actor. The actor leaves angrily.

Wilson is having back pain because of Amber's uncomfortable mattress. House finds the actor in the elevator and tells Wilson that Amber is going to be out for herself. House then sedates the actor so he can perform an MRI on him.

House denies that he's responsible for the foot numbness, but Cameron, who's there keeping track and doing House's charts, says it might have been the result of the fall from the sedation.

Kutner performs an EMG test to make sure that the actor didn't fall and hurt his foot. Kutner and the actor discuss who has the better job. Kutner thinks the actor has a cool job, the actor thinks Kutner has a job that means something.

House is watching his soap opera and trying to point out symptoms to Taub, Foreman and Thirteen. Thirteen wonders if she dated one of the actresses. Cuddy finds House and tells him to let the actor go until the inspection is over. She wants him to behave while the inspector is there.

Kutner reports the numbness is not the result of an injury - it's a real symptom. House orders tests for toxins and an environmental scan.

Wilson and Amber go shopping for mattresses. Amber is negotiating by claiming she is pregnant. Then she lies about their employment status to get about $500 knocked off the price. Amber has to leave to go to work and tells Wilson to buy whatever mattress he wants. Wilson calls House to let him know that Amber let him choose the mattress. House tells him that it's a trap to see if he will choose the mattress Amber wants.

House visits the soap set and finds nothing out of order. His co-star describes the actor as a non-drinker with no bad habits and no history of sexual misbehavior. However, House realizes that he's impotent, probably from eating too many sunflower seeds and too much vitamin B6. Kutner and Thirteen want to confirm, but House wants to start treatment. They agree to try to give him an erection. The actor agrees, but is humiliated. Kutner and Thirteen discuss what the actor should do. The actor gets an erection and has an orgasm, which shows that it isn't B6 toxicity, but all of a sudden the actor goes into cardiac arrest.

They manage to get they patient stable again. They discuss what caused it, but none of the diagnoses fit. House thinks he's hyperthyroidism, but Taub wants to test. Cameron once again chips in by stating the test is necessary. However, Foreman agrees with House - they have to irradiate his thyroid. However, Foreman was just humoring House - he agrees with the rest of the team that the test is necessary and orders the test once they are away from House.

Cuddy finds House in the morgue eating. House demands a big screen TV to behave. The inspector catches them there but Cuddy has disposed of the food. Cuddy sends House out of the room, but before he leaves, House steers him away from where they hid the food.

Cameron is chastising House over his charting. House tells her he avoids charting so one of his fellows will do it. Cameron denies she wants to work for House again.

They run an iodine trace test on the patient to check his thyroid function. Taub tells the patient he used to love doing meaningless plastic surgery and that meaning isn't everything. The test shows that the body isn't filtering the iodine - the patient's kidneys are failing.

House is upset that they didn't take his advice - the test actually hurt the patient. House wonders why Foreman went behind his back. Taub speaks up and says it must be an autoimmune disease.

Amber and Wilson are making out on the new mattress. Amber wants to know why he bought the firm mattress. She thinks he did it only to please her, and tells Wilson never to do anything but take care of himself again.

House and the patient discuss whether the patient should quit, but again he says he can't. House reminds him that the only thing stopping him is his fear of not having something to fall back on. However, at that point, the actor starts talking as if he's on his soap opera. House finds out the patient has a very high fever. The patient thinks he's his character on the soap.

The patient obviously has an infection, but they can't figure out which one. The patient is now in a coma. House goes mattress shopping with Wilson. They discuss diagnoses. Wilson wants a waterbed. House looks at a flower on the pillow and gets an idea.

House comes back and tells them it's an allergy. All the infection tests came out negative. House notes that the patient isn't improving on antibiotics. He wants to give him steroids, which will kill the patient if it is an infection. However, the pharmacist won't give House the amount he asks for without approval from Cuddy. House grabs the steroids and the pharmacist calls Cuddy.

Cuddy goes to confront House. She tells him to confirm. House proposes that she call security too late to do any good. Cuddy agrees and leaves, but fears she will lose her job. Cuddy comes back with negative test results from the allergy tests instead of having House arrested. However, Cuddy rushes to the patient to give him antibiotics, but she finds out he is recovering. However, they have no idea what he was allergic to.

The inspector confronts Cuddy and tells her the rules are there for everyone.

Amber is having trouble sleeping on the waterbed, as is Wilson. He wants to return it and Amber agrees. They cuddle on the floor. They are both glad he tried it out. Amber says she will make sure they take it back.

House is still wondering what was wrong with the patient that was cured by steroids. He puts down his drink whilst watching the patient, back on television on the soap, and watches him drink a fake gin and tonic on screen. He calls Cuddy, who has been fined $200,000. He realizes the patient has been drinking fake gin but real tonic water - he's allergic to quinine.