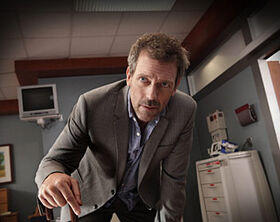 Locked In is a fifth season episode of House which first aired on March 30, 2009. In a special episode of HOUSE, shot and told predominantly from the perspective of a patient, Mos Def guest-stars as Lee, a man who awakens in New York after a bicycle accident unable to move or communicate in any way. House, himself injured in a motorcycle mishap, occupies the hospital bed next to Lee and quickly annoys the doctors treating them both by insisting that Lee has "locked-in" syndrome. After House gets Lee transferred to Princeton Plainsboro, the team is on the case to try to "unlock" him. Meanwhile, Wilson suspects House is hiding something when he refuses to divulge why he was in New York.

A patient in a hospital in Middletown, New York is regaining consciousness, but can't move his legs. The doctors are talking about transplanting his organs when he hears House (who is in the hospital because of a motorcycle accident and is a patient in the emergency room himself), who thinks he is still alive despite the lack of response on the EEG. He has noted that the patient's eyes are following him. House thinks he has locked-in syndrome and asks the patient to blink, which he can.

The attending physician realizes House is right when the patient shows obvious sign of voluntary movement of his eyelids. The patient remembers he was in a bicycle accident. He's told that his brain has separated from the rest of his nervous system, which has caused his paralysis. House thinks that the patient may have had brain damage before the crash which caused the crash, rather than being the result of brain trauma. The patient remembers he couldn't apply the brakes on his bicycle. However, the attending thinks the patient's condition is permanent.

The patient sees his wife. House is looking at his X-rays. His wife kisses him and leaves. Suddenly, House's team (minus Taub) arrives. They start doing a differential. Thirteen thinks he might have a brain tumor, and House is hopeful that's correct because they could treat it.

They do an MRI of the patient. They put goggles on him, and he starts having a vision of talking to House on the beach. They talk about the patient's belief in God and how he goes to church to please his wife. The patient thinks God sent House to help him. The patient sees his kids playing on the beach.

House goes to see the patient. The MRI found a lesion which House thinks is a tumor most likely causing paraneoplastic syndrome. House discontinues the anti-viral medication prescribed by the attending so that he can treat the patient. The patient realizes House is a little nuts for being obsessed about his inability to communicate. Suddenly the patient has a seizure.

House is arguing with the attending about the cancer, and the wife realizes the patient wants to go with House. House manages to get the patient transferred to Princeton-Plainsboro.

Kutner and Taub are discussing what House is up to with Taub's employment. Suddenly, they see something and go to get House. They ask the patient if he drinks or uses opiates. House wants to biopsy the lesion in his brain.

Chase talks to the patient before doing the biopsy. He is put under anasthetic. He starts thinkling about being on the beach with House and his kids. They start talking about God again. House says he doesn't know if he's going to be all right. The patient regains consciousness and starts answering questions on cards. However, he soon loses the ability to blink.

House tells the wife that the biopsy may have taken away his ability to blink as that part of the brain was near the biopsy site. They start talking about the result of the biopsy. House thinks the patient may be brain dead. However, Taub suggests a brain/computer interface. They hook up the patient to the machine and tell him to think "up".

Wilson asks why House is evading questions about being in New York. House says he was visiting Foreman's brother in prison.

Taub is telling the patient about his work problems. All of a sudden, the computer interface seems to be responding. Taub realizes the patient is still alive. His wife comes in and sees the monitor respond. We hear the patient thinking again.

House starts taking a medical history. The wife says he was in St. Louis, but the patient denies it. The wife realizes he lied to her about it.

House tries to find out where the patient was, but thinks he is lying about not being with a woman. Neurosyphillis would explain the symptoms. Taub thinks he's telling the truth. House starts questioning him and realizes he was at a friend's house. Taub and Kutner go to do an environmental scan of the friend's house. The patient was aparently working as a janitor at a factory. They go to do an environmental scan of the factory and find cadmium dust - it might be heavy metal poisoning. They start chelation therapy. Taub thanks the patient for responding.

Foreman talks to the patient about buying a necklace for his first girlfriend, who didn't like it. Thirteen also didn't like the necklace he bought.

The wife asks him why he lied to her. His business was slow and he needed to make money.

Taub goes to see House to tell him he still wants his job. House tells him to come up with a good idea - the computer was somebody else's idea (the guy who invented it). Taub tells House that the job terrifies him and that overcoming his fear is the only way for him to matter. However, House points out that finding out about the factory and cadmium was still Kutner's idea.

Thirteen gives the patient eye drops with dye in them to get a good look at his cornea. She and Foreman realize its not cadmium poisoning.

House is studying the whiteboard when Cameron comes in to treat his injuries from his accident. The patient's kidneys are failing and he's using the myelin sheath from his nerves. House deliberately swallows all the narcotics Cameron gives him. Cameron suggests giving the patient a lumbar puncture. Cameron reminds House he didn't fire her, she quit.

Wilson knows House wasn't visiting Foreman's brother and asks him why he was there again. House wonders why he's so obsessed. House says he was up there checking out Wilson's new girlfriend. House suspects Wilson feared that all along. Wilson is astounded, but admits he's seeing one of the nurses who is treating his brother Danny.

Foreman prepares for the lumbar puncture. All of a sudden, the patient has a heart attack. He's back on the beach again, but denying the existence of God. The House in the vision admits that he doesn't know what is wrong.

Kutner manages to revive the patient. They are arguing when House tells them to shut up because the patient appears to be trying to communicate. The patient finally communicates he has an itch in his right foot. House realizes his liver has failed completely. Foreman comes up with a likely diagnosis and House orders a biopsy.

They prepare for the biopsy and Thirteen says she likes the bracelet Foreman got her, she just doesn't want to wear it at work where it can get patient fluids on it. All of a sudden Kutner notices a rash on her wrist. Thirteen admits that she got some of the patient's urine on her wrist. Kutner thinks the patient may have an infection that he passed on to Thirteen, leptospirosis, that is found in rats like the ones in the friend's house. That would cause the liver failure and result in the release of toxins that would cause the locked-in syndrome. They find a paper cut on his hand where the infection could have entered. They start treatment and ask the patient to try to move. Kutner tells him to try harder. The patient moves his right index finger.

House comes to the team to congratulate them. Taub claims credit for coming up with the diagnosis, but House realizes that it was really Kutner's idea. However, House doesn't mind because it shows Taub cares about the job.

Wilson realizes that House wasn't up in Middletown scoping out his girlfriend, and has stolen House's pager, which he hasn't been answering. Wilson called the pager number and got in touch with House's psychiatrist. House silently walks away. When they reach the patient's room, House angrily tells Wilson he had no right to invade his privacy. House says he's not going back because the psychiatry isn't working. Wilson tells him he will wind up alone.